Want to have a say?
Send us a letter for publication
Tasmanian roads –
latest alerts & reports
Donate to Tasmanian Times –
BSB: 807009 Acc: 60178142
no new content for a few days,
site is being migrated
Tasmanian weather
forecasts and warnings
new writers & contributors welcome,
please contact us with your submission 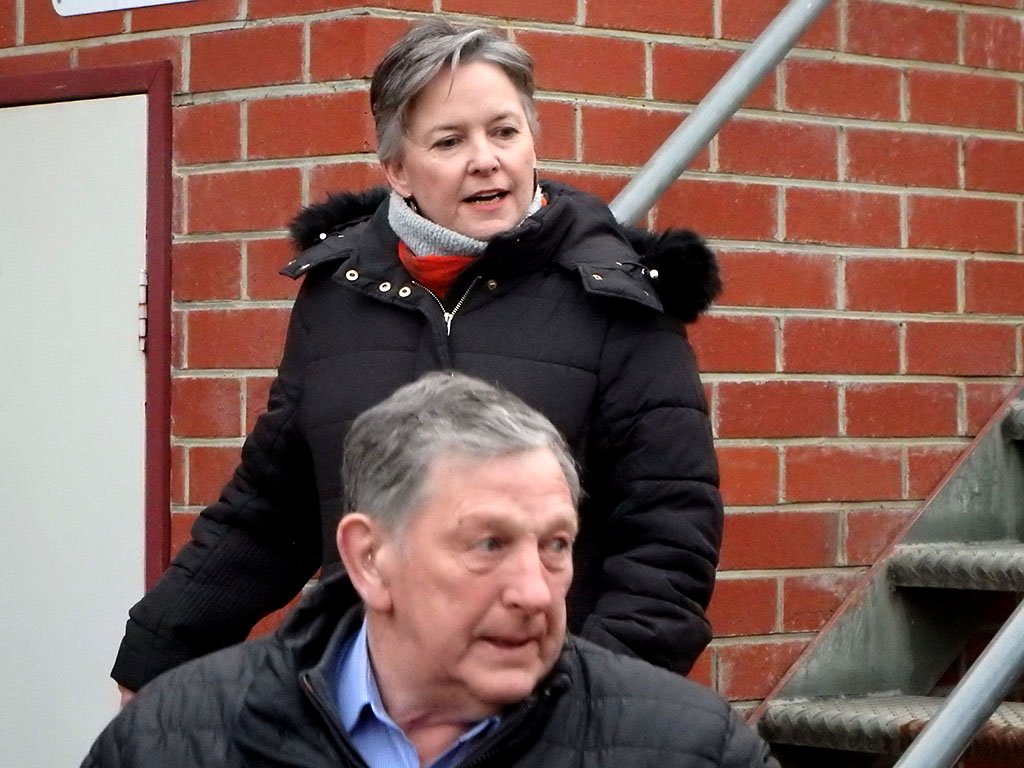 A public petition will this week be circulating throughout the south calling for Mayor Bec Enders to resign from Huon Valley Council. The same petition will also be calling on the recently appointed General Manager, Jason Browne, to vacate his position and to allow the recruitment process to start over again. A community website has been set up called Fix Huon Council.

An increasing throng of community members are now calling for a Town Hall meeting to address the many issues surrounding this process to include ‘conflict of interest, an alleged attempt to defraud a public office [bargaining for public offices], aiding and abetting a crime [parties to crimes], pecuniary interests, improper legislative and meeting procedures processes, a lack of transparency along with the ongoing, and most often unnecessary, closed council meetings’.

Under section 57 of the Local Government Act 1993 where the petition complies with the requirements and is signed by 5% of the electors in the municipal area, the Huon Valley Council must hold a public meeting. Based on the most recent HVC Annual Report 642 signatures will be required.

It was at the 23 June HVC Ordinary Meeting of Council that the recruitment process ran off the rails when a confused council attempted to understand how to reinstate the four-person General Manager Recruitment Panel (GMRP), following the removal of Councillor Wilson from HVC over an issue with his residential address. Wilson was ineligible to be councillor from 12 April 2021, so his appointment to the panel was illegal from the moment he was nominated. Cr Campbell was voted in to replace Wilson.

The formation of the panel was yet another closed council decision and it originally consisted of Mayor Enders, Deputy Mayor Doyle, Cr Newell and Cr Wilson. 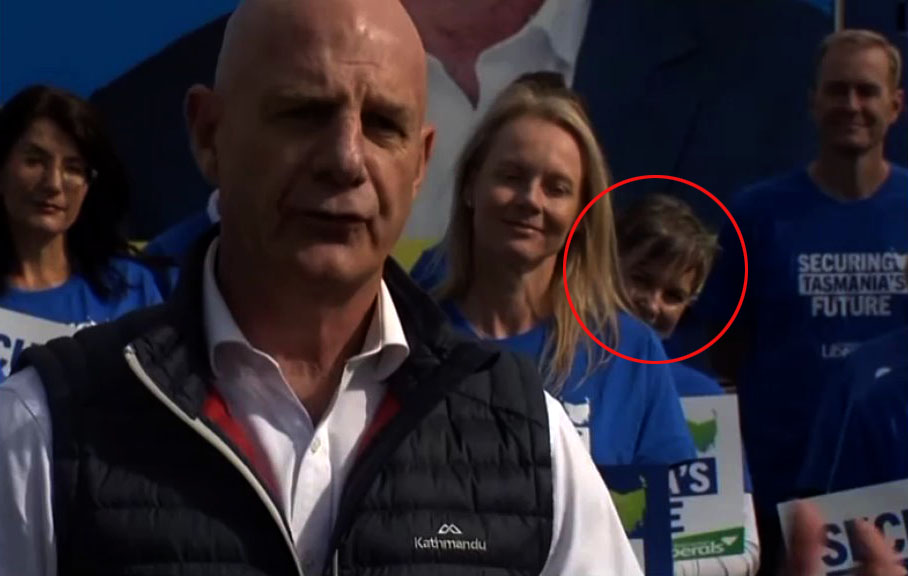 On 28 March 2021 Enders came out as a Liberal candidate for the Division of Franklin at the state election. Elected to local government on her promise to be an independent, many were angry and betrayed when she announced she was ‘now’ a member of the Liberal Party.

With Enders then taking 6 weeks leave from office to run her campaign this left three councillors on the GMRP instead of four. The fact that Cr Doyle was on the panel was another issue, if not an illegality, in the recruitment process. Had Cr Doyle not been on the panel she would have appropriately stepped in to fulfil the seat vacated by the mayor.

The legal status of the General Manager Recruitment Panel and therefore the entire recruitment process is now in question.

With Enders gone this left Doyle to lead the panel. It is reported Doyle sought the assistance of the former HVC Commissioner, Adriana Taylor, on how to employ a General Manager. It is unknown at this stage if Taylor suggested the recruitment agency Red Giant, or if this recommendation came from the then Acting GM Andrew Wardlaw and/or the Director of Legal and Governance, Matthew Grimsey. 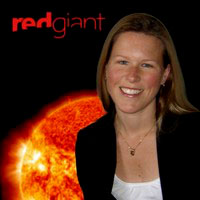 Expressions of interest were sought but Red Giant, who was involved in the previous GM appointment of Emilio Reale who came from the Glenorchy City Council, was again engaged.

Why Red Giant was selected is an important question that now requires an explanation given the unfolding clouds of suspicion over this conflicted appointment. Regardless of why Red Giant was engaged, it was a matter undertaken by an incomplete Panel of only three Councillors, and at times there were only two Councillors.

Reason enough to start the recruitment process over again.

In mid-July Tasmanian Times was provided with the names of three candidates who were shortlisted for the GM position. TT contacted the Director of Local Government 15 July 2021 to advise of the leaked names and we were advised to complete a statutory declaration, and to lodge a formal request for an investigation into the matter. Meanwhile, TT published about the leak but not the candidate names. Almost four months on the investigation into the leaked names is still ongoing by the Office of Local Government.

Despite the leaks, Enders did not halt the process or start over, as was suggested by Cr Gibson in his View Point article in the Huon News 21 July 2021.

“It appears someone is trying to engineer an outcome instead of following this process. […] To ensure that we select the right applicant we must pause the process until the leak is investigated and if necessary to start the process from scratch.”

Then followed an investigation by Edge Legal who have provided a $15,000 report to Council which Enders will not release in full. Instead, Enders has released snippets of the report in a recent media release.

“The independent review into the recruitment process has made it clear to Council what actions we should have taken. Council accepts that it needs to learn from its mistakes and will adopt a best practice approach for managing conflict of interest in the future,” said Enders

“In order to restore public confidence in Council’s recruitment processes, Council has agreed to the report’s recommendations that it implement a guideline or supporting document to the Code of Conduct as a best practice approach to managing conflicts of interest in recruitment, and further, that Councillors undertake training in relation to managing conflicts of interest,” said Enders.

Tasmanian Times can report there are moves afoot to request a formal investigation into possible crimes under the Criminal Code Act 1924. Calls to the Governor to establish a Commission under the Commissions of Inquiry Act 1995 is also under consideration.

Prior to the 29 September 2021 Ordinary Meeting of HVC, a group of 75 ratepayers gathered outside the council chambers. 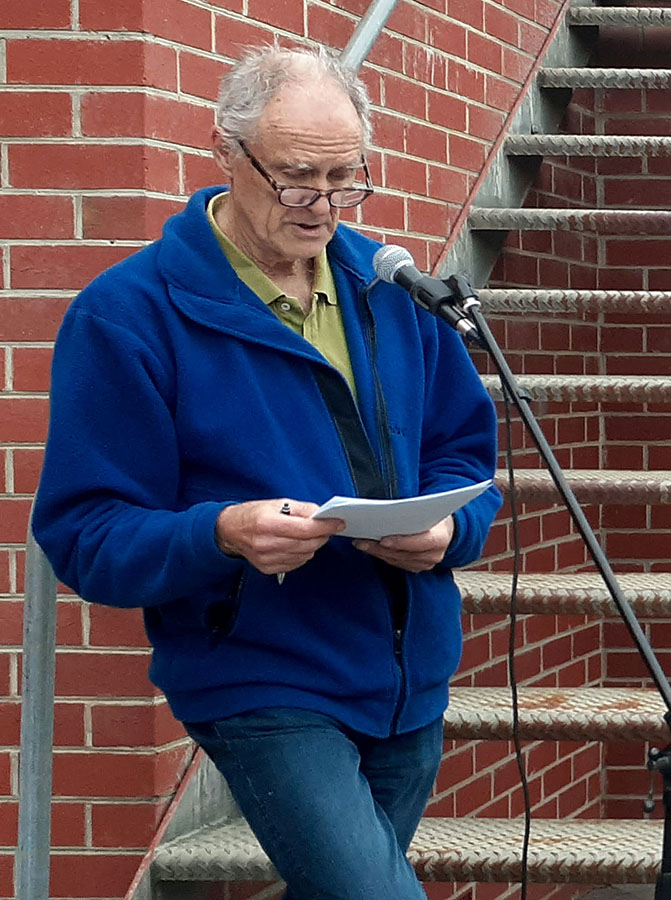 “I invited all the councillors to come and we have with us Cr O’May, Cr Prince, we’ve got Cr Gibson and Cr Campbell here.

“I did invite the mayor to come along. I said, would you please come along, introduce yourself and explain the council position.

She came back to me and said, ‘I’m not sure how you can guarantee a safe environment.’

“I then wrote back and said I think I could enforce a respectful opportunity for you to voice your views, if you would like to come and maybe if you can address a couple of issues that concern us as residents.

“The first one, and probably the most important one, is why when council recognised there was a conflict of interest when the number of candidates was reduced to 14, why wasn’t there also conflict of interest in reducing the number to 14. The conflict didn’t start at 14, it started at 85 when out of those 85 people each one was omitted from the list. Council hasn’t identified that.

“The other thing that I wanted the mayor to speak out about was the independent legal advice that she’s got.

After some 45 minutes of speeches from various members of the community, Enders and her husband did actually turn up.

Enders remained quietly in the background before making her way into the council building. Also at the rally was former Mayor Peter Coad who has been showing considerable interest in this entire matter of local governance from the moment the community was aware there had been leaks of confidential candidate information.

When he noticed Enders leaving the group Coad followed and eventually cajoled her to front the meeting and have her say. 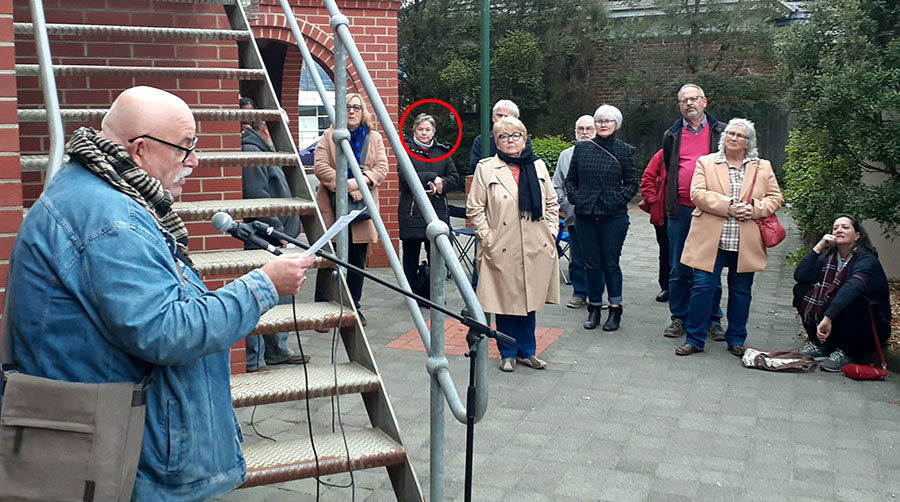 Tim Sanderson addressing the rally, Mayor Enders quietly in the background before going into the Council building

Mayor Enders speaks to the rally

“Firstly, thank you for your invitation to attend this protest that you’ve organised. And for the few letters that I’ve received, I’ve received about 15 letters as well that I responded to. Okay. look, there’s no doubt that in this three year term of nearly four years, that none of the councillors could have ever predicted that we would be in this position,” said Enders.

“And, and I’m really disappointed that I’ve disappointed you. And I’ve, I’ve messed up on the conflict of interest. And I accept that wholly, I’m accountable for it, and I’m owning it. I’m owning it every day. And, um and, we should have done better, and we will do better.

“Um, it was important for us to commission the Edge Legal [Lawyers] report, um to review the conflict of interest process and how we manage that. And clearly as it was stated, the finding is that it was below standard around managing the conflict of interest. And um, and there are recommendations that have been set down for training for all the councillors.

“Sorry, somebody just said the word corrupt. I do want to clarify,” said Enders.

“Sorry. I do. I do want to take this opportunity to clarify the point. Because we’ve actually sought legal advice [Simmons Wolfhagen Lawyers] on whether there was any corruption or any breach, […] the advice that there is no, um corruption, over this particular failure over the Code of Conduct, sorry, recognising, the conflict of interest component of the criminal process.

“Um, we’re discussing that tonight about releasing that information. And we will do that, discuss that.

“Recruitment matters are actually, um confidential matters. Then you come out the following day after you release the information or you bring a report into open Council.

“Recruitment is not normally done in organisations in an open council meeting situation.

“But look, with all that I appreciate that whatever I say for some people, it is just not ever going to be enough. I really appreciate that. I can sense that and, um but we did the best that we thought we did at the time.

“We have, um it’s been proven by the Edge Legal report that we um were under the standard with recognising the conflict of interest.

“Um, we accept that, we acknowledge that and, um we are going to do a lot better about it because…

“It’s too late… Why did you have to use one that had somebody that again, put a cloud over the whole thing.”

“So the um, the Edge, Legal … Edge Legal, Edge Legal was appointed by our acting General Manager to do the review”

“He has worked for council before!”

“And, and we have provided a response on that already. So look, I do need to go up to the meeting upstairs,

“I recognise that this is pretty important to you, and um, but we have made a decision,”

Voice from the crowd 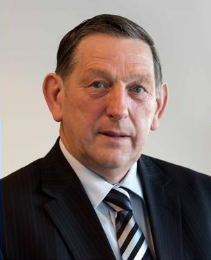 Former Mayor Peter Coad had previously advised he was not keen to speak at the protest rally, though he later said he could not help himself after hearing Enders speak.

“The second thing that would have happened if somehow or other that person was then found to be an applicant that was conflicted, that consultancy would have been removed immediately and costs would have been recovered from that organisation, plus damages.

“And we would have taken the 85 applications and given it to a completely new agency to have them assessed. That’s the proper process for dealing with this matter. But those councillors who acted, they got caught in the situation. Their thinking at the time was how do we deal with this because they’re under stress and pressure.

“The other thing in relation to the Edge Legal report, I can tell you I know everything about Mr Collinson. Mr Collinson was representing Page Seager at the time of the Board of Inquiry. Mr Collinson represented the General Manager and the council at the same time. And this raised eyebrows in legal circles. And there’s legal advice in relation to that matter, which is really very concerning.

“That doesn’t mean that its ethical.”

“Now, that is wrong, in my view and there are other legislations.

“And we can’t let that happened in the Huon Valley,” said Coad in closing. 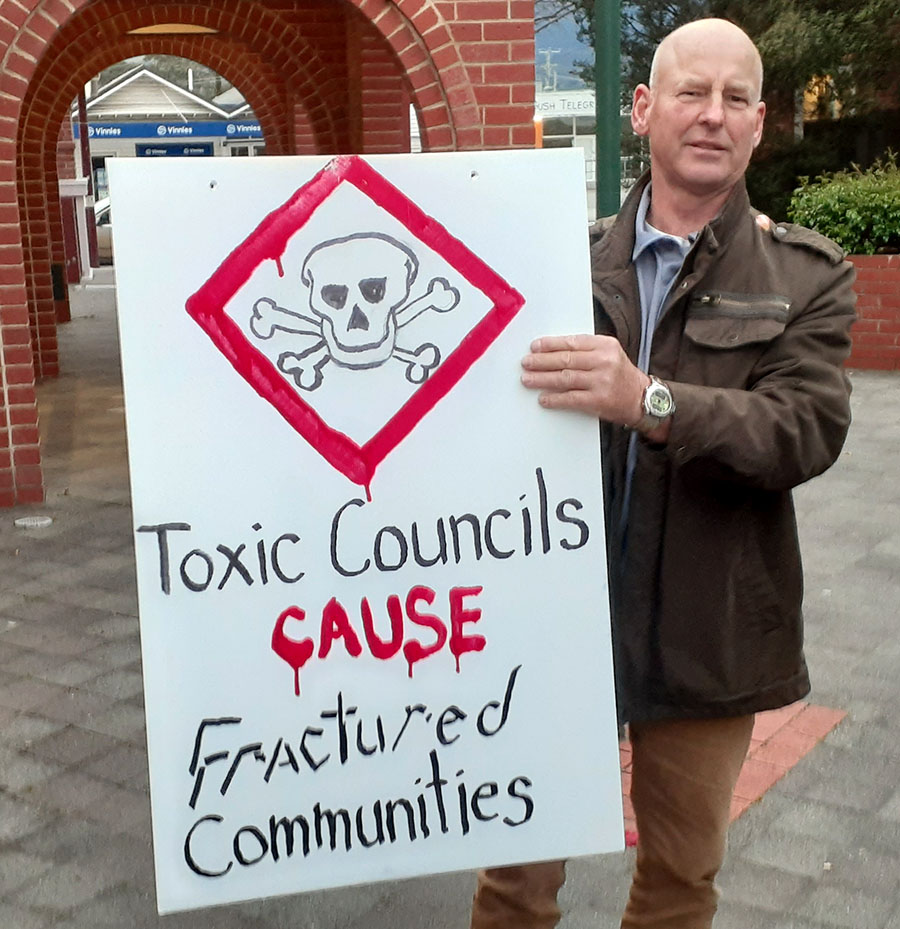