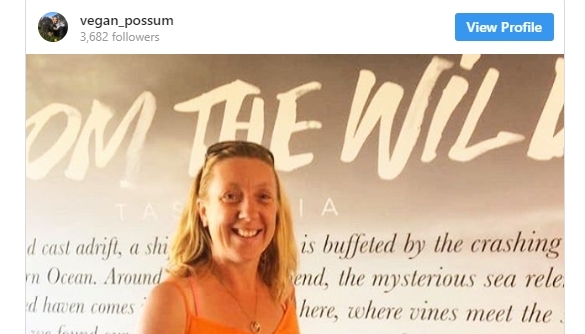 Bryony on her Instagram page
Share
Tweet
Share
Share
Email
Comments
Tasmanian Times is a leader in independent media in Tasmania. We are interested in collaborating with and providing a platform to other media initiatives. That includes bloggers, podcasters, video makers and a whole host of peeps out there creating and distributing in digital and traditional formats. In this series of occasional articles we profile the people out there who are making things happen in the Tasmanian independent media space.
First up is Bryony of Vegan Possum. Tas Times met her at the recent VeganFest and she agreed to talk about how she got her podcast up and running.

why did you decide to start the podcast?

When we first moved over to a vegan diet as a family earlier this year, I wanted to get as much information and support as possible. I strongly believe that knowledge is power. I wanted to arm myself with all the facts to make sure we were doing it properly and getting everything we needed in our diet. Many of the leading health authorities in the world have confirmed that a vegan diet is safe for all stages of life, including pregnancy, infancy and childhood so I knew we were making a good decision.

There are a lot of great online and print resources but I don’t find as much time as I need to sit and read. I had a search for vegan podcasts and anything specific to vegan parenting. I found loads of great podcasts talking about veganism in general – and vegan mums talking about their own vegan journey – but nothing specific to raising vegan children. Suddenly I thought…why not start one! I’ve got a blog about veganism – The Vegan Possum – but finding time to write articles is challenging.

I love the way that podcasting lets me get a lot of information across with a lot less effort than writing a huge article. I also find it’s a much easier way to consume and digest the content rather than trying to focus on a lengthy written piece.

Initially I thought it would be just me talking about my experience raising vegan children, but it has since evolved to conversations about vegan parenting with other mums and dads, as well as experts in vegan nutrition, and vegan resources and organisations.

It’s been going great and I’ve just hit 2000 downloads. For such a niche audience I’m really pleased with how many people are tuning in. We have a linked Facebook group which is growing too. That’s great as the idea behind the podcast was to support other vegan parents, to normalise veganism and to create a community. In a world where the media portrays being vegan as a bad thing, and often vilifies vegan activists and vegan parents, I think it’s critical to have a safe place for like-minded people to meet, ask questions and discuss ideas. I’m also finding that the topics we are discussing are helping people transition to veganism. With my weekly guests we are discussing things about moving to a vegan diet, vegan food ideas, and vegan nutrition.

where are you headed with Vegan Possum as a whole?

I’m using my blog as a platform to educate and motivate. Most recently I have been using my Facebook and Instagram to start more local initiatives. Last week we held our first vegan meetup in Launceston: we celebrated ‘Thanksliving’ with a BBQ at the park and raised money for the local Big Ears Sanctuary. We have also just launched The Launceston Vegan Tours – to show visiting vegans or local people who have recently converted to a vegan diet all the great spots around town offering vegan food. The blog also hosts the podcast and I sell my children’s book on there too; it’s a bit of a mix of all my activism!

I’m determined to talk about veganism as much as possible to support people interested or needing some help. I think I offer friendly and inclusive activism. Often I talk about the horrors of the animal agriculture industry and don’t hide the facts, but there are no graphic or disturbing images or content on Vegan Possum and there is also no judgement. If someone messages me letting me know they’d like to try vegan or even vegetarian a few days a week I’m fully supportive. It’s often from these smaller actions that bigger things, and large scale change, can happen.

I’d also love to see more local activism happening around Launceston. I set up a leafleting and outreach table at the climate strike which got loads of great conversations happening and feedback, so I’d like to do more of this kind of thing and even see a Cube of Truth being set up in town.

You wrote the children’s book ‘Eating Animals is Weird’. how has that been going?

I’m so pleased with how the book turned out. I wrote it earlier this year and found a vegan illustrator to help me bring it to life. She really captured the humour behind some of the verses. I talk about my motivations to write the book and how it happened in one of my podcast episodes if anyone would like to hear more – http://everydayveganmum.com/episode24

Bryony has kindly offered us a copy of the book for a Tasmanian Times giveaway. We are going to do this through our new Instagram account so please follow @tasmaniantimes on IG and keep an eye out for an upcoming post with the giveaway info. You can also follow Bryony at @vegan_possum. 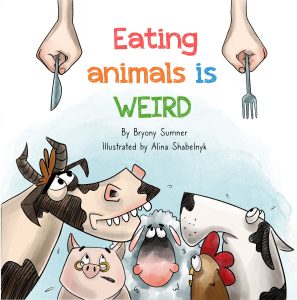