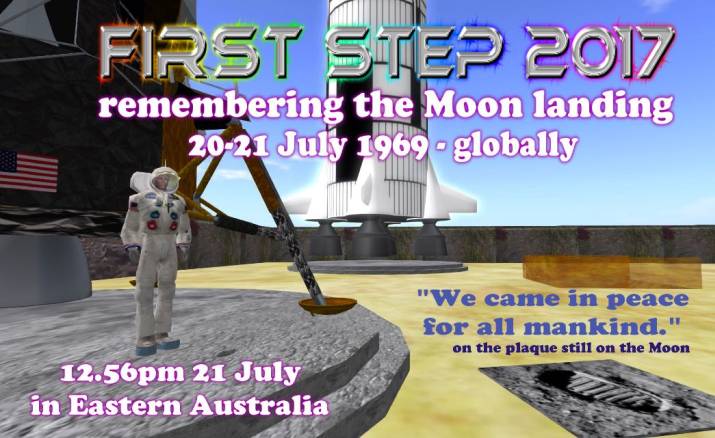 *IMAGE: made in Second Life with Kim Peart’s avatar, called Starfarer, dressed as an Apollo astronaut.

IMAGE: The first FirstStep event, remembering the moment of the Moon landing at 12.56pm on 21 July, was held in the Tasmanian Space Centre on Rosny Hill in 2007 in Tasmania, which was part of Kim Peart’s gallery at the time ~ Vandemonian Art

First Step is an event to remember the 1969 Moon landing.

In Washington the Moon landing happened on the 20th of July.

This was a global event, when an explorer from Earth stepped onto the Moon to win a peaceful race between two nations.

If the Soviet Union had stepped onto the Moon soon after, we would have been living on Mars by now, and racing to the stars.

Anyone with access to a television stopped to see those grainy images flicker from the lunar surface, sent via the Parks radio dish near Canberra to a waiting world, when we heard those haunting words from another world ~ “That’s one small step for man: one giant leap for mankind.”

Neil Armstrong later claimed he said “a man”, but no trace of an “a” has been found in those words heard by the people of Earth in 1969.

When the astronauts blasted off from the Moon to return to Earth, they left a plaque on the Sea of Tranquility that declared ~ “We came in peace for all mankind.”

Anyone who would like to remember the Moon landing, can simply take a break on the moment it happened in 1969, when people around the world stopped to watch and listen, as one.

In eastern Australia this moment is 12.56pm on Friday 21 July.

If you are near a computer, pull up a YouTube of the event ~

Afterwards, if there is time and someone to chat with, discuss the next giant leap in human exploration beyond Earth.

Will this be a space base set up on the Moon, by China, by Russia, or as an International collaboration?

Will our next giant leap see Elon Musk establish a city on Mars?

On a troubled world haunted by nuclear weapons, and warnings about changes to the Earth’s environment, we can remember the Moon landing as an event of peace on the Sea of Tranquility on the Moon.

When people on Earth unite in peace, they can solve any problem.

WITH SPACE PIONEERS IN SECOND LIFE

Anyone who ventures into Second Life can participate in a First Step event at 12.56pm, eastern Australian time, at the Space Pioneers Moon landing exhibition.

To go there in Second Life, find the region called Nautilus – Eshmun, find the Space Pioneers embassy building, go through the teleporting door by the robot to the right, and go up the ramp to the event.

People from anywhere on Earth might be there, via their avatars, remembering the Moon landing, and participating in discussions on the next Giant Leap.

Space Pioneers in Ross, Tasmania, will be at 39 Church Street, where we will have the Second Life event seen on the computer as well.

Space Pioneers will be local and global on Friday with First Step.

July 21st is also National Lamington Day in Australia, and we will be making lamingtons to celebrate First Step.

We are wondering about the shape of a Moon lamington ~ and what should that be?

Anyone turning up in Ross would be welcome ~ arrive by about 12.30pm.

First Step is an idea that I proposed in Tasmania in 2007, when there was no annual event to remember what has to be the greatest feat of exploration in human history.

For a long time I wondered about an annual Moon landing day, but there was always a brick wall in raising this.

Out in the backyard with a bonfire in the cold winter’s night, an idea dawned beneath the stars with the Moon above, to remember the moment when people around the World stopped to watch our first step onto the Moon, and hear those haunting words.

Rather than a day, I wondered if the moment should be the focus.

By focusing on a global moment that falls over 24 time zones, an event has two dates.

The Moon landing was the first global event that captured the moment, live and globally, and that is how an event called First Step can be remembered in July each year.

And following the theme set in Neil Armstrong’s words from the Moon, First Step can be followed by a Giant Leap discussion about the future of space exploration.

The first First Step event was held in the old general store on Rosny Hill in Tasmania in 2007, where I had set up the Tasmanian Space Centre, and mounted a display of the Moon landing, using stories and images from old newspapers and magazines from July 1969.

HOW WERE PEOPLE AFFECTED BY THE MOON LANDING?

In the Blue Mountains, in Australia, a group of builders, building a house, made a time capsule of the event, and built it into the wall.

This time capsule, in the form of a letter, was discovered recently ~

“A time capsule hidden in a Glenbrook home 48 years ago and marking mankind’s first steps on the moon, was unearthed this July. Preserved out of the sunlight: The original letter “time capsule” found in a door jamb during a renovation in Glenbrook. Deposited on July 21, 1969, the four authors of the capsule’s letter – carpenters Alan Doherty, John Bower, Bert Bosman and Bill Wilkie who were building the house at the time – left it preserved in the door jamb to be found almost 48 years later to the day. “It’s a timeless piece marking the landing on the moon, it doesn’t get better than that,” said Glenbrook’s Dimity Edwards, whose father’s employee, Trent Gorman, found the capsule while renovating the building on July 4.”

‘Fox Hunting for that elusive “a” on the Moon
Kim Peart, 21 July 2016, Tasmanian Times
http://www.oldtt.pixelkey.biz.au/index.php/article/fox-hunting-for-that-elusive-a-on-the-moon

*Kim Peart made a scrap book of the space race to the Moon as a student at Clarence High School, which he donated to the school Library in 1968. Kim saw the Moon landing on TV in Hobart in 1969, when everyone stopped work to go the store next door to see the event being streamed live from the Moon. Kim joined a space society in 1976 that looked toward building orbital cities, the L5 Society, later founded the Hobart L5 Society, which then became the Southern Cross L5 Society with a launch in the Observatory at the Rocks in Sydney in 1982. This later became the National Space Society of Australia. Kim is director of Space Pioneers, founded in 2011, and still looks toward the construction of the first orbital city in space.