IN COCHABAMBA, a city of about half a million people, we had one of those ´´what a small world it is moments.´´ Crossing the street we bumped into Anne and Luis, a couple we had met and interviewed in Venezuela. We went for a coffee with the French pair who´ve had amazing lives. Luis is 82 now and a veteran of fighting alongside Che Guevara in Cuba. He is still passionately involved in the social and political goings-on of where ever he is at that moment. After long discussions about Bolivian politics and the global environmental crisis we parted ways wondering if we´d be lucky enough to cross paths with this inspirational couple again.

The ten hour night bus from Cochabamba to Sucre was a reminder of how poor Bolivia is. Cochabamba is a major city and Sucre is Bolivia´s judicial capital, yet much of the main road linking the two was a very bumpy dirt road and most of the rest was stone (think the road from Zeehan to Trial Harbour). We arrived in Sucre dusty and bruised and planning to spend a few days before continuing south to Potosi. However, we ended up staying a week and then heading north again due to the entire Potosi department being blocked for 19 days in protest, which even touched Australian news, though of course this coverage predominantly regarded the stranding of tourists rather than the issue itself. 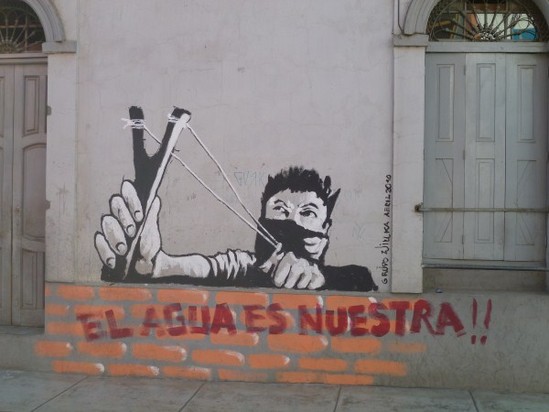 ´´The water is ours´´, graffiti in Cochabamba – a city famous for the ´Water Wars´ a few years ago.

Sucre must be one of the best places in Bolivia to be stuck as it’s a beautiful, relatively calm place of about 200,000 people. It´s a classic colonial city full of white-washed buildings, cobbled streets, treed plazas and all the grandeur that comes with a city that was once very important to the Spanish empire. Its irrational, but we often feel guilty finding the colonial Spanish planning and architecture beautiful, knowing what they did to the place and its people.

Sucre, then called Chuquisaca, was the heartland of the independence movement in the early nineteenth century. Independence from Spain came in 1825 thanks to Simon Bolivar´s charge southward from his native Venezuela with one of his main generals Antonio Jose de Sucre. Bolivar and then Sucre were Bolivia´s first presidents. Until independence Bolivia was considered ´Alto Peru´ and part of the viceroyalty of Peru. Since 1825 more than half of Bolivia´s territory (including its vital Pacific coast) has been lost to Brazil, Argentina, Chile, Paraguay and Peru in various wars. The war with Paraguay from 1932 to 1935 over the Chaco region is generally considered as a proxy war between Standard Oil who backed Bolivia and Shell who sided with Paraguay, sparked by oil speculation that turned out to be mistaken.

Sureños (people from Sucre) seem generally more affluent than in other parts of Bolivia and locals (not just tourists) are actually seen in the more up market restaurants and bars. We even went to a local theatre production celebrating 185 years of independence that featured dance and costumes from all over Bolivia and brilliant music. The music was particularly good as several of the band appeared to be joyfully inebriated and on the point of short-circuiting. 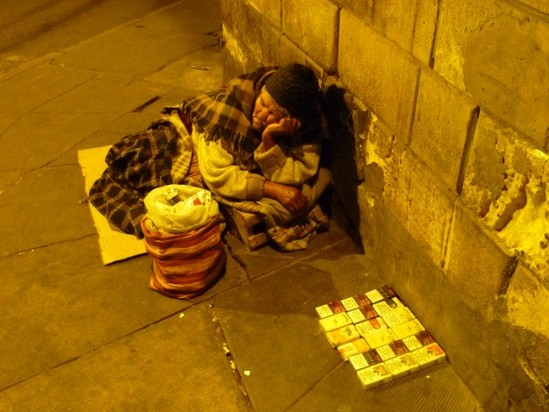 Just before I settled into a cozy Sucre pub to start writing this donkey I wandered to the main plaza to buy a newspaper from a street vendor. As I read the front page showing that Potosí´s protesters had issued a final ultimatum to the national government before escalating protests and taking more towns and cities, I witnessed a truck load of riot police arriving at one of the grand government buildings opposite me. For a long time protesters wouldn´t negotiate unless it was with the President himself, though it has been suggested to us by a local that the people here don´t actually want Evo present because they want him to solve the problems, but rather they want him here so they have someone to blame. The protests in Sucre in support of Potosi ensured that we didn´t lose the constant atmosphere of urban gunshots, which were actually protester´s fireworks that we had our whole time in La Paz.

A week or so later we would eventually make it to Potosi due to agreements finally being reached between the two Departments and Evo´s ministers. During our time in Potosi (see next donkey) I asked around fifty people, wealthy and poor, indigenous and mestizo, and every one of them was extremely angry with President Morales and most said that the relationship was irreconcilable. They believe he has insulted them by not addressing their issues personally and by saying their action was politically motivated (due to the Mayor of Potosi being from a different party).

This is a huge political shift in Bolivia. Potosi is one of nine Departments in Bolivia and Morales had been almost a godly figure here. In 2005 a massive 84 per cent of Potosinos voted for him and in 2010 it was still 78 per cent. The poor believe in Morales as he was also very poor. He grew up in a llama herding family in extreme poverty with several of his siblings dying of poverty related illness. He eventually became a coca farmer and due to his intellect, social skills and football talent, rapidly climbed the ladder as a union leader and then into politics. Morales is Bolivia´s first indigenous President. Spanish is his second language after Aymara. 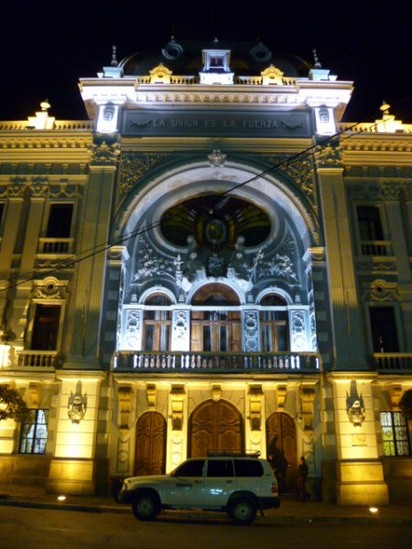 Speaking to Ramiro in a men´s only extremely old fashioned worker´s pub in Potosi, he was slightly less emotional about the situation than most, explaining to me that Evo is a good man inside, but he´s been captured by politics and powerful internal and external pressures and is now unable to deliver what he would like to. Ramiro is middle to upper class here and admits that things were better for people like him before Morales, but when they had the right wing Lozada government, strongly supported by the US, people like him didn´t even see the poor let alone think about them. He believes that Morales has done a lot for the poor, who are generally indigenous, and to make everyone equal, but it is just ´´so fucking difficult.´´

Morales still has over four years until his presidency goes to the vote again, so it is possible he can repair this relationship in time. However, most Potosinos don´t think so and given the history of political action and revolution stemming from this area they may not give him until the next election.

For more on the strikes see HERE: 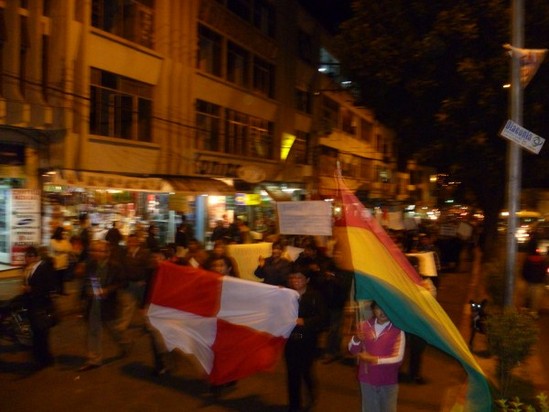 Our time in Sucre allowed us get to know the city better than you sometimes do when travelling, exploring its rough edges as well as the polished centre. We were able to view dinosaur footprints which were accidentally discovered at a limestone quarry not far out of the city. The quarry stopped cutting this section about 50 years ago as they hit magnesium, which is no good to them, and since then decades of rain and erosion have revealed the footprints which once belonged to dinosaurs heading for a drink in a now extinct lake.

In Sucre we ate a lot of Salteñas, which are a bit like a Cornish pastie but with slightly sweet pastry and that almost always contain one olive and one little egg (something like a quail´s egg). They are either beef or chicken with vegetables and Bolivians love them, but only in the mornings for some reason.

On the advice of a local guy we got talking to we tried to go to a football match of the Bolivian first league in Sucre. We prepared fully by getting drunk and eating greasy food and jumped in a taxi to the stadium. The taxi driver´s lack of knowledge of a game that night was a bad sign and getting dropped at the stadium we found there wasn´t a game for another week. On reflection our initial advice regarding the game was a classic case of the Latin American custom that if you don´t know something it is better to make something up than admit you don’t know. We are very used to this custom, but I so wanted to believe in this case. 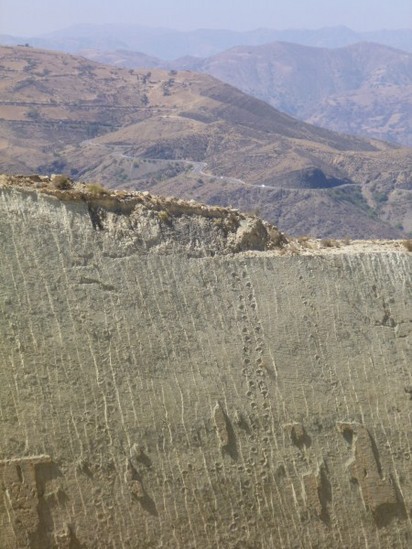 In the outskirts of Sucre is a large campesino (peasant) market, which is cheaper and more interesting than the central market. We´ve been seeing a lot of ´prickly pear´ for sale in markets, which is a weed in Tasmania but I believe is native in Bolivia. The indigenous here use it to wash their hair, which may explain why hair is so shiny and healthy here.

After a week or so in Sucre and with Potosi still in lock down we decided to head north to a little village called Samaipata in the hope that in this time the problems may be resolved. Samaipata is near where Che Guevara was finally captured and killed whilst he was trying (unsuccessfully) to build a popular social movement to improve conditions for Bolivia´s poor majority.

It may be important to point out to readers, that in Latin America Che Guevara is not just a t-shirt or badge on the back pack of left-leaning, Marx quoting university student or by many who don´t know the first thing about his life. Here he is a major influence on the lives of many older people, including several current Presidents by their own admission, and an extremely powerful symbol for most of the population. He powerfully represents the 500 year struggle against the oppression of most Latin Americans. He is seen as someone from a more privileged background who was willing to give his life fighting for an end to the enslavement and impoverishment of millions. He ultimately did give his life fighting in Bolivia where he was captured and killed by members of the Bolivian army and CIA operatives.

Many researchers believe that Klaus Barbie (the Butcher of Lyon) was also involved in the capture and killing of Guevara. After his life as a Nazi leader personally torturing people and supposedly being responsible for around 4000 deaths he ended up hiding out in Bolivia, but under the protection and on the payroll of the US government working as an agent for the 66th Detachment of the U.S. Army Counter Intelligence Corps. He is reported to have assisted Bolivia´s dictatorship through the seventies with his expertise on concentration camps and torture techniques. Many believe he lived for a time on the now famous ´World´s Most Dangerous Road´.

Samaipata is a peaceful place of about 3,000 people where condors glide on up-currents, waterfalls are a plenty and pre-Incan and Incan ruins are carved into solid red sandstone hilltops. We hired a couple 100cc scooters that were completely inappropriate for steep, bumpy dirt roads, not to mention the river crossing, to get to some of the local ruins.

Samaipata was an interesting place to wait for the social-political row of Potosi to settle, as this area, not far from the major city of Santa Cruz, is the right-wing heartland of Bolivia, probably partly because much of the area is former hacienda country and is now owned by Europeans and Americans rather than Bolivians. Many locals, though not really engaged with what Potosinos were striking about, were happy that they were challenging the Morales government. 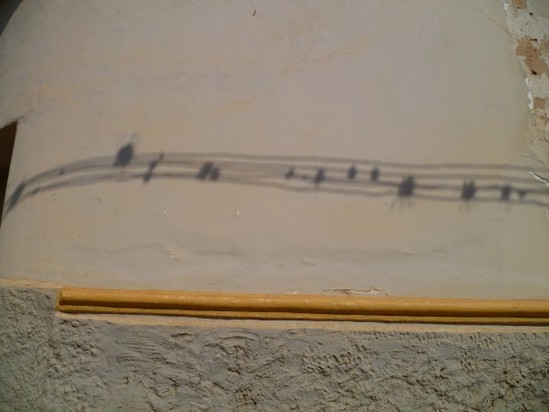 Tragically we didn´t have the camera at the time as it would have been a perfect image for ´Travels without a Donkey´, but walking through one of the dusty little streets of Samaipata the other day we passed an old man carrying a freshly cut donkey´s head on his shoulder. His local mafia connections are unknown.