FINALLY after a straight forward border crossing we made it to Bolivia, the country I most wanted to visit on the continent. Bolivia is South America´s poorest country and has the highest percentage of indigenous inhabitants. Looking at the history of Latin America the two statistics likely go hand in hand.

The first couple of nights were spent in Copacabana, which feels so much like a little coastal town that you keep forgetting it´s actually a lake you´re next to and you´re almost 4000 metres above sea level. We had an interesting meal there in what we thought was a restaurant but seemed more like the living room of an old indigenous couple. If it was a restaurant it didn´t look like they´d had a customer for years, but soon we were being served trout from the lake with rice. The old couple seemed to put about a hundred coca leaves each into their mouths while we were there making them particularly difficult to understand due to the golf ball sized lump in the side of their cheek. It wouldn´t have been to suppress hunger or thirst given their location so I guess it was either for the cold or just for the subtle feeling.

Watching this old couple who have probably drunk coca tea and chewed coca leaves every day since they were kids was yet another reminder of the depth of arrogance and ignorance that is US foreign policy. In the nineties the US used all sorts of threats and economic black mail to try to force the eradication of Bolivia´s coca crops. The US deployed army helicopters spraying chemical defoliants, which were devastating ecologically and to the health and livelihood of rural peasants. The Us move slashed GDP by 4 per cent and the lives of around 120,000 farmers (remember GDP does not consider illegal drug production or trade. Fortunately this was one of the factors that contributed to the toppling of Bolivia´s authoritarian pro-US government of the time and now Bolivia has a former coca farmer and coca farmer union leader as its president, Evo Morales.

To demand of a country that it destroy a plant that has been central to its culture for thousands of years is amazing. A study in the eighties found that approximately 92 per cent of Bolivian men use coca and 82 per cent of women, either in the form of chewing leaves or as tea. 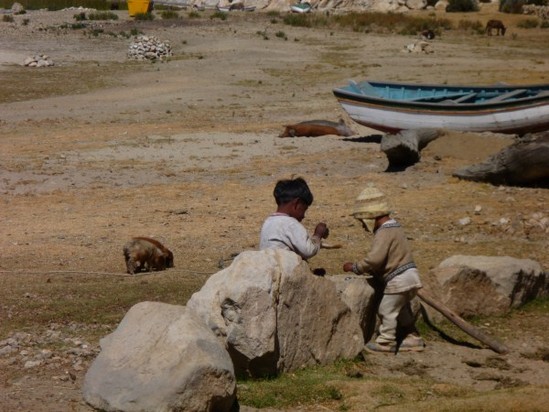 Coca is used somewhat like we use coffee and tea, after meals and at work. It is a sacred plant in indigenous culture, mama coca is considered to be a connection to the supernatural forces of Mother Nature, as it has several useful effects. Alkaloids in the leaves suppress hunger and thirst but without inhibiting consumption. They increase oxygenation in the blood, which helps to deal with the effect of altitude. I can vouch for the chewing of the leaves making a noticeable difference when hiking above 4000 metres. The alkaloids also regulate the metabolism of glucose, which also helps deal with altitude and irregular intake of food, common in poor rural areas. Coca also acts as an anesthetic, one of the reasons it was first used as a pharmaceutical, and as such people chew the leaves for tooth and gum pain.

Chewing coca leaves also increases the tolerance for work. Initially the Spanish deemed the practice as ungodly and the Catholic Church ruled as such, and production and chewing was outlawed. However, then they discovered it could aid slavery. The King of Spain wrote to the Catholic Church and had the ban removed. Soon the Spanish had indigenous slaves working 48 hour shifts in mines such as Potosi, with little more than coca leaves to survive on. They then began controlling and taxing coca production and often paying miners with the only thing that made their horrendous conditions possible.

About 328 kilograms of coca leaves are needed to produce one kilogram of cocaine. Most town markets here would have a good few hundred kilograms of leaves for sale, as a miner for example may chew close to 400 grams a week. Another interesting statistic is that with only 5 per cent of the world´s population, the United States consumes 50 per cent of the world´s cocaine. 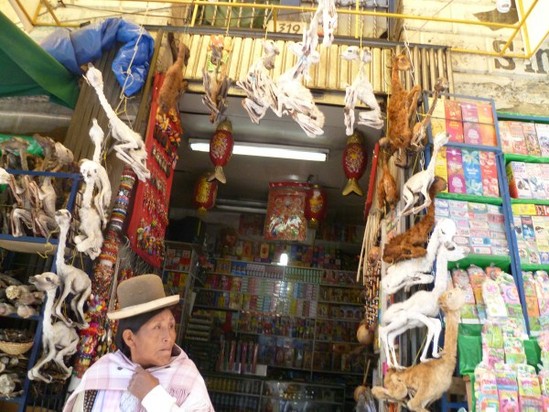 From Copacabana after walking about 24 kilometres, which was neither the 17 kilometres, or flat that we thought it would be, we made it to a village of about 15 houses. Near the end of the road we met Emilio who was riding his bicycle to work in a nearby paddock. Emilio offered to take us to Isla del Sol (Island of the Sun) on his ´Lancha´ for a small fee. Though not far it took about 45 minutes to get there as his 3.5 horse power motor struggled to push the big old wooden boat through the lake. Lake Titicaca is big, about 180 kilometres by 80 kilometres.

As mentioned in a previous postcard many believe Isla del Sol to be the origin of the Incas. Nearby is the smaller Isla de la Luna (Island of the Moon). In many old American cultures, including Incan, the sun was considered male and the moon female. Both islands contain significant and well preserved Incan ruins. As you look across the lake behind Isla de la Luna you see snow covered mountains well in excess of 6000 metres high, reminding you why it gets so cold when the sun goes down.

Much of Isla del Sol has been terraced by the Incas and their descendants both for agriculture and land stability. Hundreds of people still live simple agricultural lives on the island, often now supplemented by providing tourism services. In many parts though you can sit and watch the locals going about life pretty much as they have for hundreds of years. Change does not appear rapid or craved. The island is special not just for its history but because there are no motor vehicles or tarmac. Everyone just walks on the island, sharing the paths with donkeys, llamas, alpacas, pigs, sheep and a very occasional cow. Spending a few days on the island was a welcome respite from the noisy chaos that can be Latin American towns and cities. Sometimes as I walk through little villages like those around here I am reminded of films set in medieval times. 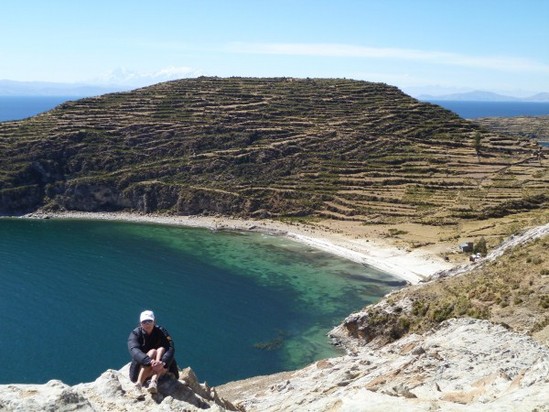 La Paz is entered through its sister city El Alto high on the plain before you descend into the deep valley that cradles La Paz. El Alto is home to the poor majority, including many rural people who have been forced to the city in search of income. The sprawling poorly serviced city has a revolutionary history. Generally when there are major protests, including those which toppled the government in 2003 setting the scene for Evo Morales, they involve the citizens of El Alto swarming down the hill to La Paz.

For most of our six days in La Paz it sounded like the city was being engulfed by gun battles. Fortunately it was just various protests that always involve very loud fire crackers. Protests are a common occurrence here as Bolivians have learnt they have the power to make governments listen as they have managed to unite to overthrow them before.

One day in La Paz we had bought bread and an avocado at the market and found a little square right next to where protesters had the roads blocked to make lunch where we could watch them and try to establish what it was all about. When we finished lunch we were about to walk through the shouting crowd to read their banners and get to the other side of the block, when I simultaneously realized they were shouting ´´Evo, thief, this will be your last action´´ and that I was wearing a t-shirt with Evo´s face and ´Evo-lution´ on it. We decided on a detour.

The next day we caught some news and found that things had got a little heated there and police had resorted to tear gas and detaining people. Checking HERE on BBC it kicked off in the little square where we lunched. 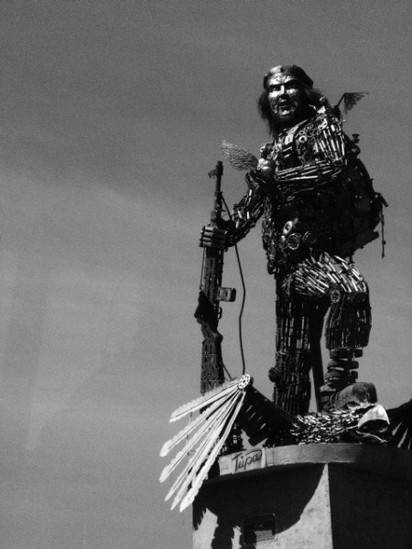 The protesters were demonstrating against a new customs law that apparently punishes those who smuggle goods as if they were drug traffickers. This is a very tricky issue here as most people in the whole of Latin America earn their living from the informal economy, providing goods or services outside the regulated system. Also smuggling goods has been a major part of this economy for hundreds of years. Cities were even founded for smuggling, such as Colonia del Sacramento in Uruguay, which the Portuguese founded to smuggle goods across the Rio de la Plata into Buenos Aires.

There are protests all over the country at the moment for various reasons. The Department of Potosi has been blocked off for nearly two weeks now and its towns are starting to run out of some basic supplies. It is the Potosi residents who have blocked movement to and from there province in protest over whether a mountain of limestone that is to be developed for cement is part of their province or neighbouring Oruro, another poor province dominated by mining.

From La Paz we did the obligatory tourist day out of riding down the ´World´s Most Dangerous Road´. It isn´t dangerous unless you have a brain-fade moment or are really trolleyed though a couple of riders manage to die each year. The most recent to go off the 650 metre cliff were an Israeli girl who tried to wipe her goggles while riding and a French girl who pulled up too close to the edge. It would be horribly dangerous in the old cars and trucks people get about in here, particularly passing other vehicles. The hundreds of crosses lining the road and the odd wreck at the bottom are a reminder of this. The road got its name as around 200 people a year used to die on the road. Fortunately there is a new road now and as such most of the traffic is related to the bike tours. We barely saw the drop as the mountain was covered in thick fog, but only being able to see a few metres at times and knowing that the fog was hiding a huge cliff had its own mystique. 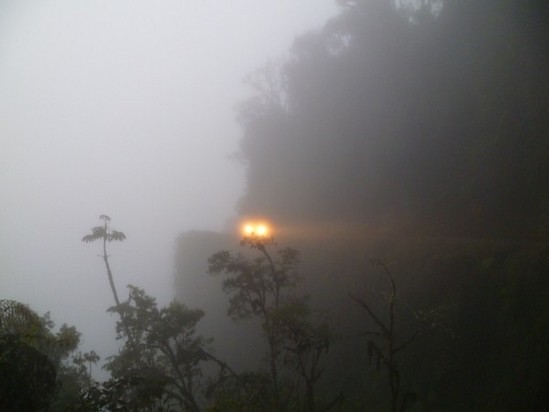 Mini van coming up the road

A young boy selling chocolates in the southern city of Cochabamba left us distraught the other day. This continent is full of child workers, who often miss out on both an education and a childhood. Many people blame the parents but few have any choice. Seeing his face as he disappeared back into anonymity after our automated “no gracias” was tragic. As I sat drinking a beer I didn´t need that cost money he needs I felt like the scum of the earth.

Travelling in Latin America, and I guess any poor part of the world can be like an emotional see-saw. One minute humankind lifts you with joy, the next minute it drops you to the ground with despair. Some days the pillaging of this continent and the poverty left in its wake is unbearable and brings us to tears. What has been done and continues to be done to this part of the world and its people by the heartless bastards who rule our world is at times only imaginable because it´s in front of your eyes. Other days we receive strength from the beauty, dignity and resilience of a people who burn bright even after 500 years of oppression.

A gift that this travel has given us that I hope never leaves is a desire to help redistribute wealth around this world defined by inequality and injustice.