Mildred Esther Lovett was born in Hobart on 13 September 1880. 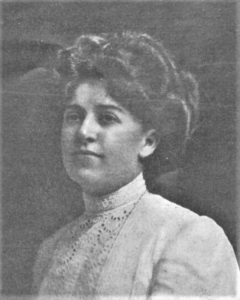 She studied painting, modelling, life-drawing, and China-painting under Benjamin Sheppard at the Hobart Technical School from 1896 to 1901. Florence Aline Rodway was one of her fellow pupils.

For a six-month period between 1898 and 1899, Lovett studied at Julian Ashton’s art school in Sydney.

After leaving school, she worked as a re-toucher at Richard McGuffie’s photographic studio.

In 1904, Lovett was hired as a full-time art teacher at the Hobart Technical College, with a salary of £50 a year (equivalent to £6,217 a year today). One of her students was Edith Lilla Holmes, who would go on to become a noted artist in her own right.

By 1925, however, she was back at the Hobart Technical College as an art teacher.

Lovett represented Tasmania in the 1924 British Empire Exhibition in London, and exhibited regularly with the Art Society of Tasmania.

She also exhibited in Sydney with the 1926–1927 Group of Modern Painters (soon the Contemporary Group) and the Society of Artists.

In 1929, Lovett made a study tour of Europe, attending the Westminster School of Art in London and the Academie Lhote in Paris. She visited several art galleries, and also made many notes about André Lhote’s cubist theories.

“one of a very select group of teachers in Australia […] who had any sympathy or understanding for Cubism.”*

Lovett was unassuming and open-minded. She was also quiet.

According to Sue Backhouse, Lovett had “dark hair [with] a strong face and serene expression.”

* Cubism is “a style of art that stresses abstract structure at the expense of other pictorial elements especially by displaying several aspects of the same object simultaneously and by fragmenting the form of depicted objects.” (Merriam-Webster Dictionary)