Tasmanian weather
forecasts and warnings
no new content for a few days,
site is being migrated
Want to have a say?
Send us a letter for publication
Tasmanian roads –
latest alerts & reports
new writers & contributors welcome,
please contact us with your submission
Donate to Tasmanian Times –
BSB: 807009 Acc: 60178142 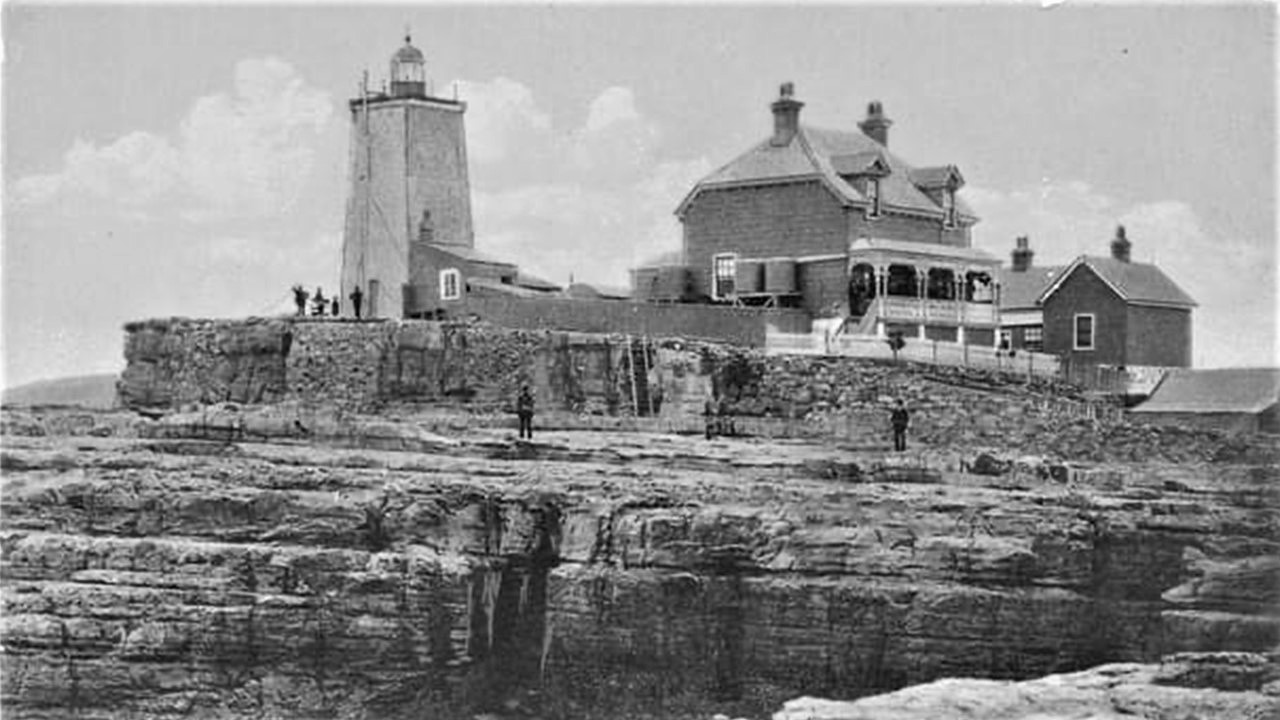 The Iron Pot Lighthouse is the oldest lighthouse in Tasmania.

The undated photograph above shows the Iron Pot Lighthouse, the oldest lighthouse in Tasmania.

It is known for its square-shaped tower.

The Iron Pot Lighthouse is located on Iron Pot Island, just off the coast of the South Arm Peninsula. It marks the entrance to the Derwent River.

The Iron Pot Lighthouse began its life as a wooden light tower in 1832. It was manned by a keeper and two convict assistants.

By 1858, a new stone hut had been built next to the lighthouse.

In 1862, it was claimed that a gold nugget was found on Iron Pot Island by one of the keepers’ children. Two hundred potential diggers flocked to the island, but they were disappointed when no further gold was discovered.

Twenty-two years later, the Iron Pot Lighthouse was renamed to the ‘Derwent Lighthouse’.* A new Chance Bros colza-burning light apparatus was installed shortly before this.

A new two-storey cottage was built next to the lighthouse for the head keeper in 1885.

A decade later, Essie (or Elsie) Margaret Roberts became the first and only person to be born on Iron Pot Island. She was the daughter of the head keeper.

A storm devastated the island in 1895. Living quarters were flooded as water tanks and sheds were washed away. A stone retaining wall even collapsed! Fortunately, no lives were lost. The keepers worked all night to keep the light going.

A light apparatus that burned incandescent petroleum was installed at the Iron Pot Lighthouse in 1904. It was the first in Australia to use vapourised kerosene.

Sixteen years later, a revolving cylinder was installed at the base of the apparatus so that the light could rotate. At the same time, the apparatus was converted to use acetylene gas.

In 1921, the keepers were withdrawn from the Iron Port Lighthouse. The huts and cottages were sold under the condition that they be dismantled. The materials extracted from them are said to have been recycled into other buildings in Hobart.

The crane that once lifted supplies on and off Iron Pot Island is still intact. * The new name did not stick. The lighthouse continued to be referred to as ‘the Iron Pot’, even on official documents.