new writers & contributors welcome,
please contact us with your submission
Want to have a say?
Send us a letter for publication
Tasmanian weather
forecasts and warnings
Tasmanian roads –
latest alerts & reports
Donate to Tasmanian Times –
BSB: 807009 Acc: 60178142
no new content for a few days,
site is being migrated 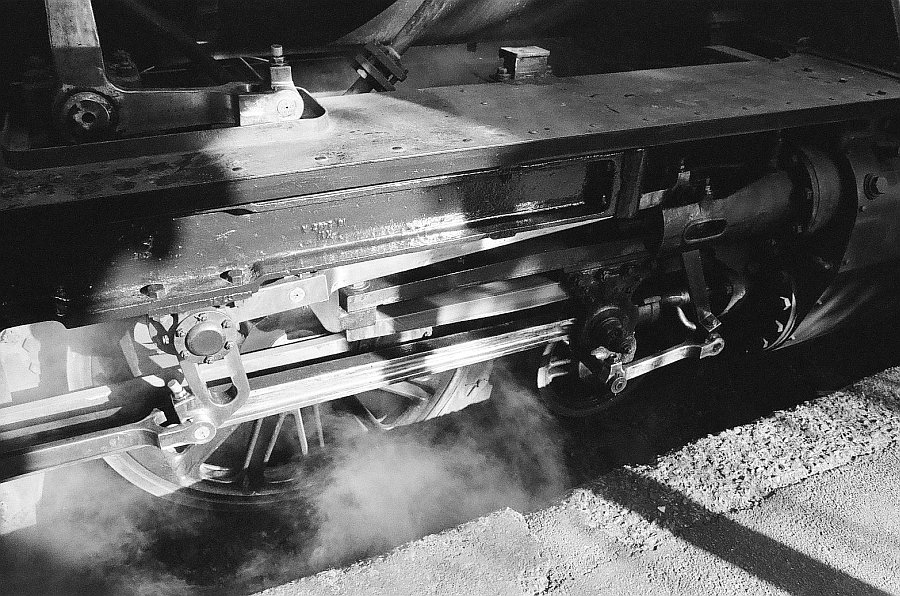 On the 150th anniversary of Tasmanian railways, Mathew Sharp looks back at the heyday of passenger and freight rail on the island.

Rod Prince sits alone on a quiet platform, his grey hair swept by the cold winds of Hobart, as the smell of a wood fire permeates across the musty station, and a sign reads fares for a sixpence.

A whistle is heard in the distance. Like a child, Rod’s eyes light up and the cracks of his smile widen, and for a moment time stops. The beating rhythm, the churning wheels, and the billowing steam from the engine take him back to his youth.

He has seen it hundreds of times before, it’s always special, but this is a train to nowhere, for this is its only stop.

Rod is the president of the Tasmanian Transport Museum, and as the 150th anniversary of the state’s railway approaches, he remembers the last celebration fifty years before.

“They ran trains for weeks all over Tasmania from Launceston, to St Marys, to Ulverstone, to Scottsdale, and Deloraine, it was an absolutely fantastic week,” Rod says.

“Unfortunately nothing like that can happen because heritage rail are not allowed on the operational network, and TasRail have shown no interest in doing anything,” he says. While today there’s the occasional freight train, little remains of its hey-day, when Tasmania once had a popular rail network that criss-crossed the state. The first train ran from Launceston to Deloraine in February 1871, and soon railways were built to cater for people, and industries like timber, mining, and food production.

“They really opened up the state, and they were critical to the opening of new farming lands, so that the farmers could get their goods from the farm to the markets,” Rod says.

“There was railways just going everywhere and they were basically the key component to the success of Tasmania getting established as a primary production state.”

The booming railways hailed new industries and technologies, but Rod remembers how soon after World War II they began running out of puff.

“Country rail services rapidly disappeared after the Second World War, the only services I remember as a teenager were the Tasman Limited, there used to be an evening service between Hobart and Launceston, and a Parattah railcar service,” Rod says.

The 100th anniversary in 1971 brought hope that fortunes would turn, but with aging trains, a better-funded road network, and a drop in passengers due to cars, the Tasmanian Government Railways were sold to the Commonwealth, and it became a freight-only network.

Over time stations were demolished and the network deteriorated, and Rod believes the privatisation of the railways in the 1990s helped further its demise.

Rod hopes that the Transport Museum will be able to celebrate next year with train rides, and the anniversary will raise awareness of the railway’s importance in the state.

Sadly for the museum, a recent legal issue over access to the track has derailed their plans. No trains can run.

“I think that there is a very strong feeling of warmth towards heritage rail in Tasmania,” Rod says.

“If the museum can achieve its goals this time next year, hopefully we’ll be taking people on a steam train trip from Glenorchy out to Chigwell.”

For most Tasmanians who rode the rails, the state’s luxury train, the Tasman Limited, holds a special place in their heart. From 1954 to 1978, one of Australia’s most famous train journeys ran between Hobart and Wynyard, through picturesque farms, lakes, coastline, and even an airport runway.

Zelma Waller was one of the renowned hostesses of the Tasman, gracing the rails with service and class, and she fondly remembers working on the train.

Zelma’s job was in the buffet car, providing food and comfort to passengers, and later as a relief hostess, providing commentary of the passing scenery and running the onboard staff. “It was a fantastic job, we were our own bosses. The girls were good to work with in the buffet section, and you know, we’d have that many on that train we’d have two buffet sections on sometimes, depends on how many we were travelling with,” Zelma says.

“I mean you could imagine us trying to walk down that train with trays in our hands with food on it, can you? She was fun and games, but it was different, it was something that you’d never forget.”

Zelma now lives on the north-west coast and remembers how convenient it was for interstate passengers from the Bass Strait ferry to take the train farther afield.

“The travellers came off the ferry and it was easy link up to travel to Hobart, and they’d just come around and pick up the train and go through to Hobart, or go north to Wynyard if they wanted to. That’s where it was handy for everybody, and they’d get a meal on it,” Zelma says.

“You meet every walk of life you could imagine… You’d meet Americans, Canadians, Chinese, Japanese, Italians, Greeks, every nationality you could think of, so every day was interesting.”

Zelma has travelled all over Australia by train, from Perth to Cairns, always starting by taking the train to the Bass Strait ferry. For her, none of them compared to the Tasman Limited.

“They were nothing like the Tasman, it’s more commercialised over there, much bigger; our train was more homely, more friendly,” Zelma says.

Having left the railways in 1970, Zelma misses life on the rails, and wonders why they ever stopped running passenger trains like the Tasman.

“It’s a real shame, they just let it die, it’s the word for it, they didn’t have any interest in it, I think we kept it running, the staff, and the communication we had because it had no advertisement, nothing, the whole time I was on it,” Zelma says.

“The Tasman was something different. As they say, in line with all the trains around the world, this one was unique.”

While Zelma was busy serving passengers, enginemen like Tony Coen kept the trains running on time, across the rugged and steep landscapes of Tasmania.

Tony still fires up steam engines occasionally, though none as famous as the centenary trains he worked on, and he often misses the old way of life on the railways.

“I was firing double-headed steam trains on those centenary runs out of Launceston, and back then when I first joined the railways right up until the time that I left it, when things started to change, I was working for an institution that hadn’t changed for 90-odd years, which was exactly the same as it had always been, nothing had changed,” Tony says. “We were still carting the same sort of everyday commodities in goods sidings everywhere, with little wagons, and in the siding you’d load it and unload it and pick it up and the train just went by,” he says.

The old railways were once one of the largest employers in Tasmania, and many generations of families worked there, forming relationships, clubs, and railway towns such as Conara Junction.

The familiarity of the job was one of the aspects Tony enjoyed the most, but like all good things, as time went by and the railways evolved, it lost its charm.

“Railway workers worked together as a family unit, that’s what they were like, a driver and a fireman on an engine worked on a 20-odd week roster, same driver, same firemen, all the time they’d work together,

“A driver would normally be old enough to be the fireman’s father, that’s how it normally works, so your fireman was your apprenticeship to get up to be a driver, you knew all about your mate’s family affairs, you discussed all these things, and off the job you’d help one another do things, that’s how it was,

“You don’t see that anymore; it was just such a great place of relationship and camaraderie. When things started to change all that went, it just disappeared.” Tony says.

The few freight trains that run today are a far cry from the dozens of trains that ran across Tasmania, and Tony hopes that a tourist railway can reignite the passion people once had about train travel.

“None of these things are done anymore, but the tourist and heritage railways can do these things and did do them, and people have just lost touch with railways, they don’t seem to care too much anymore because they haven’t seen them,

“If they could see more of what was going on and see them running around like they do everywhere else on the mainland, especially with steam flying out of one of them, they start to think,” Tony says.

On the 150th anniversary in February, those few who care will come together to remember just how much the railway touched their lives, and how much they wish it still did.

As the train pulls away from the platform, a child, too young to have ever rode the great iron horses of yesteryear, stands awestruck at the sight of the locomotive.

Perhaps in another 50 years, they can ride trains around Tasmania, but for Rod and Tony and Zelma, the train to nowhere is all that’s left, a glimmer of the past, and all but a memory long lost to time.

Mathew Sharp is a freelance journalist based between Melbourne and Sydney. He is originally from Hobart, and is an avid enthusiast in finance, technology, and Tasmanian history.