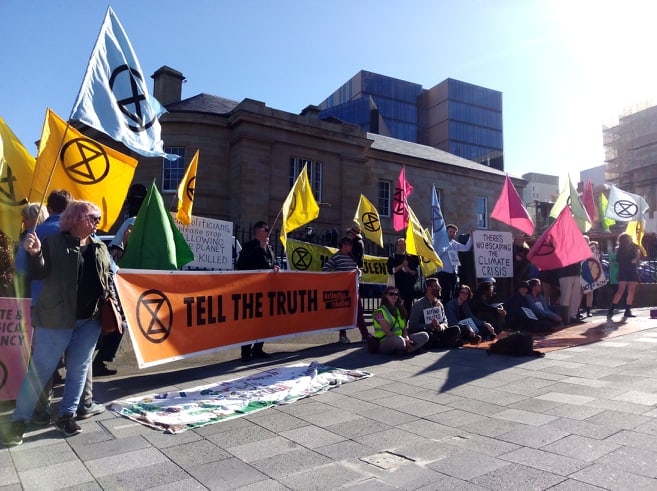 Two activists had their charges dropped and three other activists who pleaded guilty received no conviction and $60 fines. The charges for each activist were the same: one count of failure to comply with a police direction on the 18 October 2019.

“I wish I did not have to get arrested, but I also wish our government would tell the truth about the climate crisis and make a pledge to reduce carbon emissions until they are zero within ten years,” said Jodi Henry. She described herself as a mother of two children, a wife and a small business owner.

The remaining activists who pleaded not guilty are to face trial on 18 November and will be represented by well-known barrister Greg Barns. 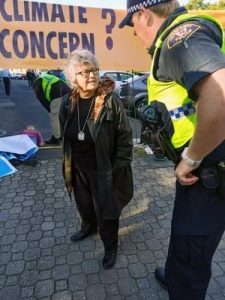 Elizabeth Perey, an elderly grandmother from Sorrell, also walked free from court today. “I am in my 80th year and I can assure you it is not just young people who are scared out of their wits about what we have done to the planet,” said the retired bookshop owner. “Scientists have been warning us for the last 40 years that if we continue to dig fossil fuels out of the ground and burn them, and continue land clearing, we will create a climate catastrophe.”

Another of those arrested was Cathryn Jay, an allied health professional. She said that in her working life she had to deal with many marginalised people who experience social inequality and hardship everyday and it was this that inspired her to participate in the protest action. “They will suffer the most from the impacts of climate change if we stand by and do nothing,” she said.

“I am not an activist and I have never been arrested,” said Chris, one of those who appeared in court. He said that as a ‘privileged middle-aged white man’ he did not take this step lightly. “I feel I have a moral duty to take non-violent direct action now,” he explained. “I hope that my arrest will make more people sit up and take notice of the looming climate emergency.”

Extinction Rebellion described itself to Tasmanian Times as “a global movement with the core strategy of mass disruption of city centres and locations of power through nonviolent civil disobedience.”

A spokesperson advised that given the urgency of the current crisis and the inaction of governments, the movement is currently planning for mass mobilisation to disrupt economic districts coming up in September 2020.