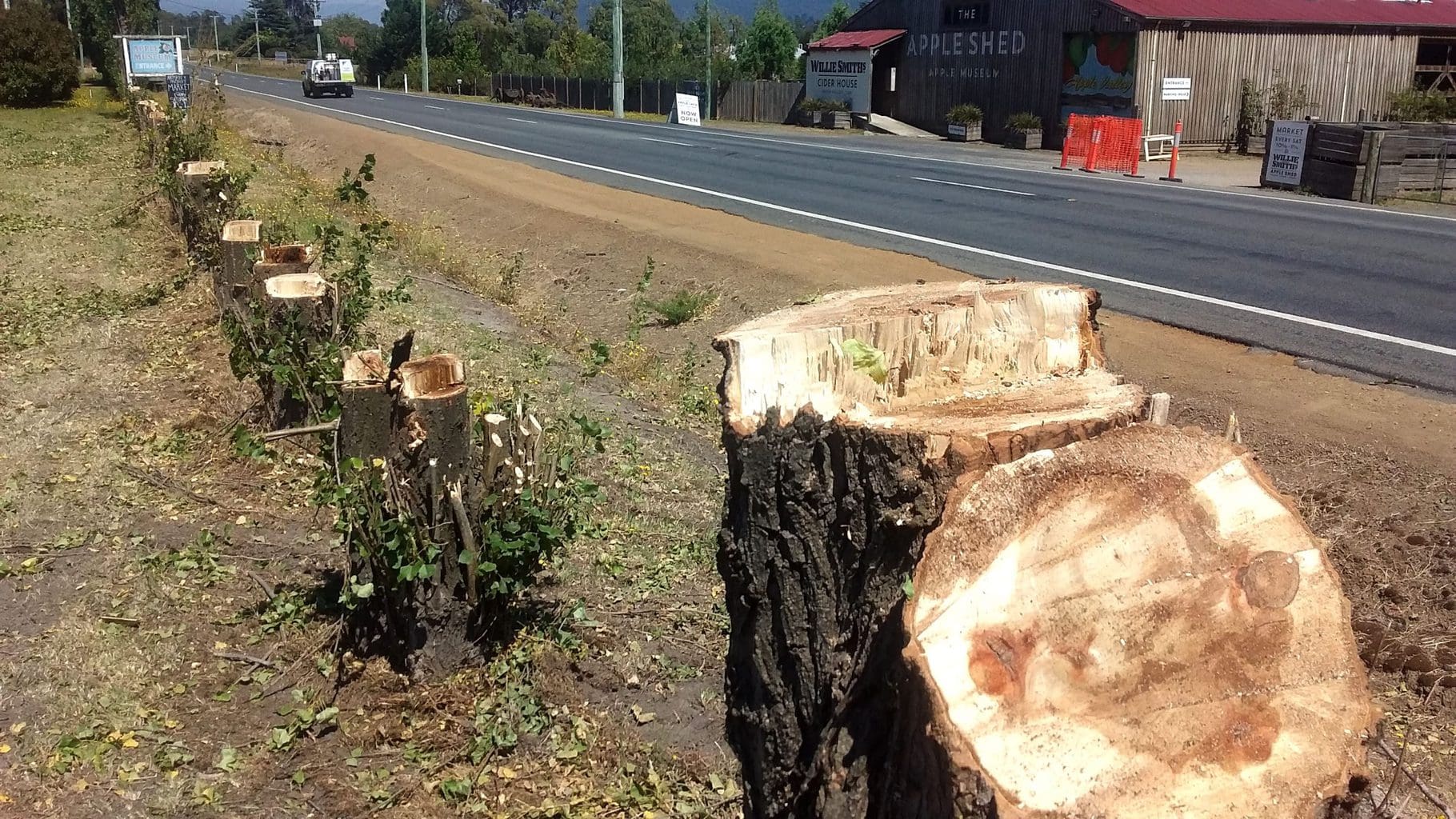 State Growth is out of pocket $380,000 to patch up a bungled Huon Highway safety project.

A Huon Valley road project has received a $380,000 windfall to patch up a botched job, Tasmanian Times can reveal. The bungle involved a road safety project not being built as designed, which later necessitated the removal of works and a new treatment.

The works were part of a 2018 state election promise, involving a state government allocation via the Department of State Growth $1.5m for roadworks in the Huon Valley.

The sum was for safety improvements to the turn offs into four businesses along the Huon Highway from Grove to Huonville. The Willie Smith Apple Shed, the Honey Pot, Kate Hill Wines and Reid Fruits were all identified by the Huon Valley Council as having high visitation, with each business supporting local employment, the growing tourism industry and the local economy.

In the words of the then Project Manager Damien Dry from State Growth back in August 2018, “Higher powers from above have told me to fix this issue, and here is $1.5m.”

Further investigations by State Growth revealed that under the federal government’s definition for road safety, the turn off into the Willie Smith Apple Shed qualified as a Black Spot. This was based on four vehicle crashes over a five year period from 2012 to 2017 near the location. They were all rear end crashes of vehicles waiting to turn right into the Apple Shed and because three of these crashes resulted in a hospital visitation, though not an admission, they were deemed casualties. No persons were injured and the vehicle damage amounted to fender bender matters only.

This location was prioritised with works commencing in January 2019 and completed in May 2019. The total cost for the 300m long turnoff into the Willie Smith Apple Shed came in at $750,000 leaving a balance of $750,000 for further roadwork improvements into the other three businesses.

The installation of the barrier on the southbound side of the road was such that it was dangerous for a cyclist to ride the 300m section of the upgrade.  It was too narrow and it created a ‘pinch point’. 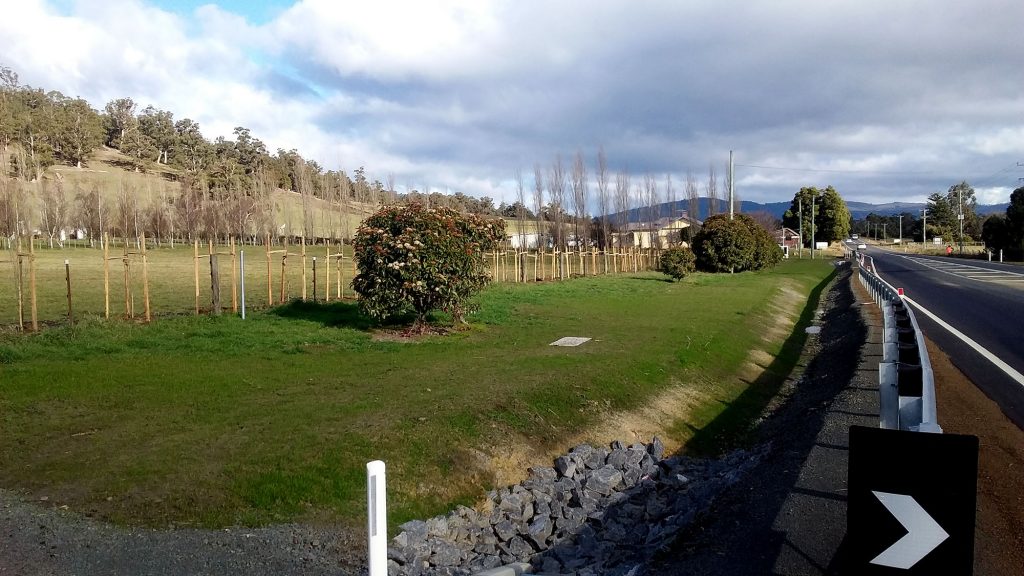 The safety barrier as installed before being removed to accommodate cyclists.

In a June 2019 sitting of Budget Estimates this community concern about the construction was addressed by Franklin MP Dr Rosalie Woodruff  with questions to Minister Jeremy Rockliff, and then to Shane Gregory, General Manager, State Roads:

Dr WOODRUFF – What is going to happen? How did we reach this situation? This was a controversial road-widening because it involved the removal of some poplars that –

Mr ROCKLIFF – Yes, I remember it. I have received some correspondence.

Dr WOODRUFF – people really loved (the poplar trees) but they are gone. There was also a discussion about why wider due diligence wasn’t done on other road safety measures, which could have been undertaken at the same time. This is a real example, a red rag to the bull, of people who were concerned that proper planning and wide consultation weren’t done on this. What is going to happen? It has created another safety issue.

Mr ROCKLIFF – Thank you for the question. Mr Gregory has indicated his willingness to address your concerns.

Mr GREGORY – We considered a range of options for that location and the treatment we put in is the most appropriate treatment for the crash history that appeared there.

The barrier wasn’t originally part of the design. It was added in late in the piece.

That is an error and we are looking at the options to resolve it because it was never intended to be a very narrow shoulder. We have maintained the lane that went through and we have a turning lane that meets the relevant standards. This is an error we need to rectify, we are working through the solution to that now and it is likely that the barrier will come out.

Dr WOODRUFF – Through you, minister, is it the case that the barrier would be removed but that the road will be extended out in a suitably safe width for cyclists? Removing the barrier could create another risk in people falling off the side of the road. The sealing would need to be extended, possibly with some building up of the shoulder to make sure it could be sealed safely and widely enough. Especially if cars are turning, it will be a pinch point that needs extra space for cyclists. It needs to be abundant, not tight.

Mr ROCKLIFF – I understand what you are saying. 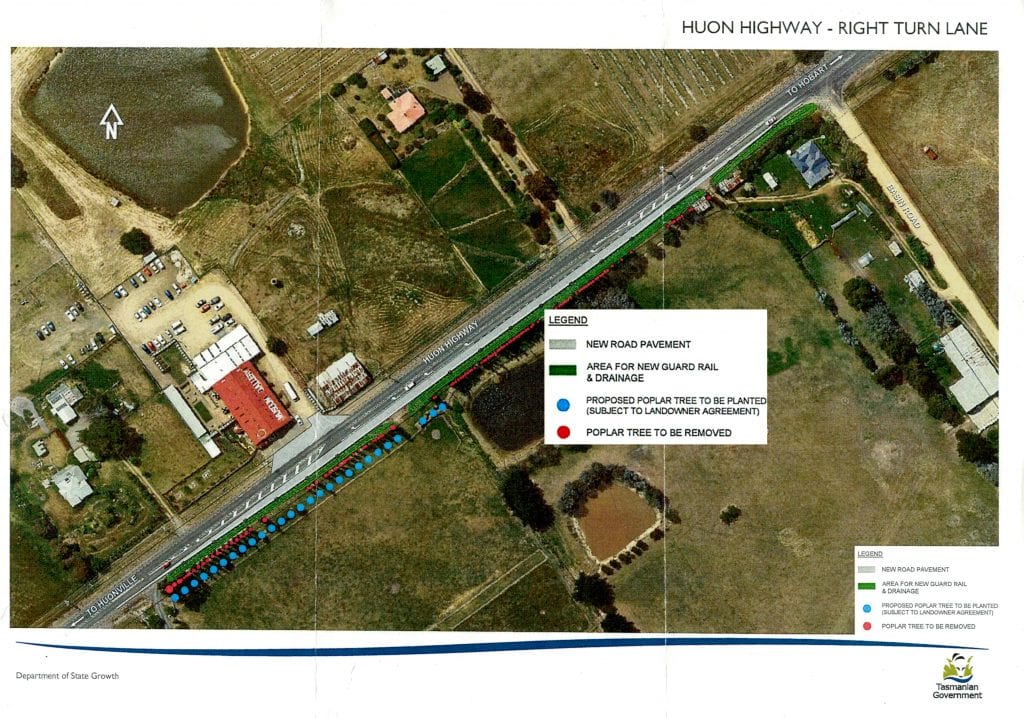 The Safety Barrier was always a part of the plan

On looking back at the CAD plan that was made public in December 2018, the safety barrier was clearly indicated (shown in green on the plan). In July 2018, Project Manager Dry also met with a Huon Valley stakeholder who was extremely concerned about the removal of the 120 one hundred year old poplar trees. The safety barrier was discussed at that meeting.

It was very reassuring however for Shane Gregory, GM State Roads, to note that the cost to make good this $380,000 bungle would not come from the original $1.5m budget allocation.

“The Department of State Growth will remove the barrier and seal the road shoulder so it is consistent with the remainder of the Highway. We are working with our Contractor to schedule this work and it will start as soon as practicable, weather permitting.

These works will not impact the remaining election commitment funds”.

Tasmanian Times contacted the Department of State Growth 9 June 2020, to inquire about the status and the ongoing costs associated with this project.

A spokesperson from DSG advised:

“The initial cost of upgrades at Willie Smith’s Apple Shed was $750 000, with the cost of additional works expected to be $380 000. The funding for additional works to improve access at Willie Smith’s Apple Shed will come from the overall program. The remaining funding is sufficient to complete works at Dowlings Road (Kate Hill Wines) and undertake further investigation and design for priority junctions.”

Tasmanian Times again made contact with DSG 14 June 2020 inquiring about their earlier commitment that these works will not impact the original budget.

On 15 June 2020 a revised statement was provided from a DSG Spokesperson:

“In response to your further questions about upgrades on the Huon Highway, I have confirmed the funding for the additional works will come from the overall roads program budget and not from the Huon Highway Priority Safety Upgrades package.”

This change of heart should now ensure the Department of State Growth will have sufficient funds to also upgrade the turnoffs into the Honey Pot and Reid Fruits in additi0n to Willie Smith and Kate Hill Wines, albeit not to the same extent as the Apple Shed turn off; but importantly all within the original $1.5m budget.

Two years on and the improvements at the Willie Smith Apple Shed are underway for the princely sum of $380,000. The barrier was cut down, the road has been widened 1.2m, and the safety barrier is being reinstalled to allow safe cycle access.

Effectively, the Huon Valley has this week received a $380,000 windfall for road safety improvements that otherwise would have been written off due to an incompetent waste of taxpayer funds.