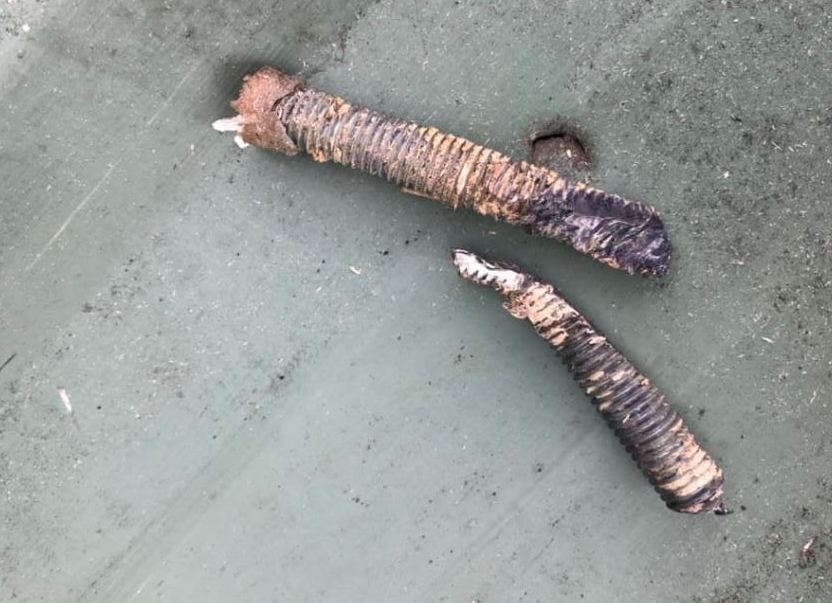 Dangerous spiked logs have caused anger among sawmillers, but environment activists say they are not to blame.

Two Tasmanian sawmills have reported receiving logs that had allegedly been spiked. They said the logs had come from the Wentworth coupe, a site of recent forest protests.

They claim the logs had bolts inserted in them, which were then covered up with silicone and bark to disguise the holes.

The logs had been received from Sustainable Timbers Tasmania and were being processed yesterday at Karanja Timbers in the Derwent Valley and McKay’s Sawmill at Bridgewater.

“This is an extremely dangerous practice which has been part of the environmental activists’ handbook for a long, long time,” said Edwards on radio on Wednesday morning.

He said other logs would be examined by police and Workplace Tasmania (sic) for any further evidence of tampering.

“There’s no doubt it’s deliberate. They are relatively fresh spikes.”

Wayne Booth of Karanja Timbers said hitting the bolt had destroyed a saw worth $3000. “Bolts don’t just go into logs on their own,” he said. It was activists who had inserted the bolt, Booth believed, as neither tree harvesters nor his own people would have done it.

The Tasmanian Forests And Forest Products Network declined to comment when contacted.

An industry insider who wished to remain anonymous told TT that Terry Edwards only had a contract until July, and it was ‘interesting’ that this incident had occurred now. “Just when it looked likely that Forest Industries Association of Tasmania, increasingly irrelevant, was heading for total oblivion,” he said.

The Bob Brown Foundation says the action is ‘abhorrent’ and denies any involvement.

“Our Foundation has no knowledge of or involvement in this alleged incident. We are always non-violent in our defence of the forests and have been all our lives,” said the Foundation’s Campaign Manager Jenny Weber. 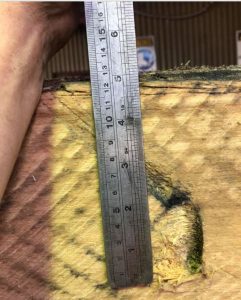 “We are calling for a full and thorough police enquiry, including into the logging companies and any workers that may have been involved in this incident. This is a set-up,” Weber said.

“There have been similar previous claims but all turned out to be hoaxes. The most recent was when Premier Giddings had to apologise to me and fellow forest defenders in 2012 after accusing us of using tree spiking as a tactic in our campaign against native forest logging. In 1993 there was the notorious frame-up by pro-loggers who placed the so-called Black River ‘bomb’ on a railway track days before the federal election,” Jenny Weber said.

Minister for Resources Guy Barnett said “Such practices are despicable and should be condemned in the strongest terms by everyone.”

He said that peaceful, respectful protesting is a fundamental right for all Tasmanians, but trespassing and acting in a way that could result in injury is never acceptable. “This is why the Tasmanian Government’s Workplace Protection laws are needed more than ever to protect lawful businesses and to protect law abiding workers, many in regional communities,” he said.

The Greens said they condemned all violence in, and surrounding, Tasmania’s forests. “We acknowledge this is a heated issue, but no life should be at risk, nor physical harm come to any individual – on either side of the forestry debate,” said Greens leader Cassy O’Connor.

They pointed out that the Tasmanian conservation movement has a long and proud history of peaceful protest in which it has never resorted to tree spiking.

“We are highly suspicious that this is another attempt to blame and demonise people who are standing against forest destruction.

Every time tree spiking has come up in Tasmania, she noted, it has been from those opposing forest protesters. “It has come from within the mendicant native forest logging industry,” she said. “Given his role in the Tasmanian Forest Agreement, FIAT’s Terry Edwards knows this better than almost anyone. How far he has fallen in making the desperate, unsubstantiated claims he made on statewide radio today.”

The Greens support the calls from for a full Tasmania Police investigation of the alleged incident at a Tasmanian logging mill. “That investigation must include contractors and employees of the businesses involved,” O’Connor said.

Labor echoed the Liberals, saying the discovery of spikes in logs at two Tasmanian mills is a concerning development that must be condemned by environmental activists and the Greens. “News that police have been called in to investigate the discovery of spikes in logs at mills in the Derwent Valley and Bridgewater is an alarming reminder of the worst of Tasmania’s forest wars,” Shadow Minister Shane Broad said. “We cannot return to those days.

The Wilderness Society said that there is an unfortunate history of false, dangerous and irresponsible claims made about forest protestors in Tasmania.

“The Wilderness Society supports nonviolent direct action to protect forests from logging, and in no way supports or condones the sort of activities that have been alleged to have occurred,” they said in a statement posted on their website. “A fundamental aspect of nonviolent philosophy is the safety of all parties. The right to peaceful protest must be upheld by all stakeholders in the Tasmanian forest debate.” 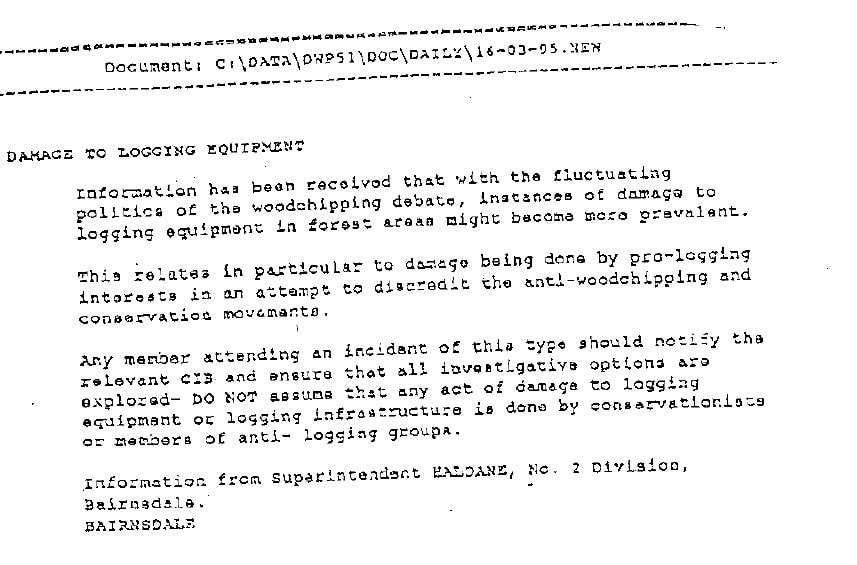