In the 1990s Tasmanian state governments introduced a range of progressive planning and environmental laws including the State Coastal Policy, the Threatened Species Protection Act, the Land Use Planning Act and the establishment of the Resource Planning Development Commission (now the Tasmanian Planning Commission) and the Resource Management Planning and Appeal Tribunal.

As these laws and institutions were established and implemented it became clear that they would necessarily place limits on development that did not comply with sustainable development objectives and the precautionary principle. It also was evident that the new laws empowered local communities to defend their places from inappropriate development.

In response, various vested interests representing the property developer industry started a public campaign for ‘planning reform’ on the basis of there being too much ‘red tape’. This push became more pronounced around 2010 and was led by the Property Council, Housing Industry Australia and the Master Builders Association. 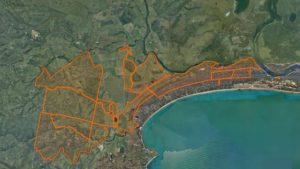 Aerial view of the proposed Cambria Green development on Tasmania’s east coast. The $140m project is in limbo after the Planning Commission rejected Glamorgan Spring Bay Council’s decision to initiate a planning amendment.

When the Liberal Party was elected in 2014 they appointed Mary Massina (formerly of the Property Council), to head a ‘Planning Reform Task Force’ while later Stuart Clues (formerly of Housing Industry Australia) became the Red Tape Reduction Coordinator in the Office of the Co Ordinator General while Michael Kerschbaum (formerly of the Master Builders Association) is now a Senior Advisor in the Department of State Growth.

Over the past few years the Liberal government has initiated a statewide Tasmanian Planning Scheme process with the stated aim to provide ‘consistency’ across municipal planning schemes in Tasmania but is ultimately about minimising the role of local government as a planning authority and reducing community appeal rights mainly via increasing the number of exempt and permitted uses in planning schemes.

Right now, the Government is reviewing the Major Projects Act and roles and functions of the Tasmanian Planning Commission (public comment period for both reviews close on the 15th of May).

The proposed changes to the Major Projects Act will sideline local government, local communities and the Tasmanian Planning Commission in favour of appointed “development assessment panels” while the review of the Tasmanian Planning Commission appears to be an attempt to further curtail and diminish the critical role the Commission plays as an independent arbiter of planning related matters such as rezoning of land.

In conclusion, the trajectory of land use planning in Tasmania over the past decade has been towards a system that increasingly favours developers and disenfranchises local communities and local government. This not only leads to poor planning outcomes it also represents a threat to due process, separation of powers and democracy.

Planning institutions and laws provide a safeguard to limit the likelihood of corrupt dealing between government and the development lobby. We must stand up for such laws and institutions now or lose them.

Around Australia’s states, property developers have had an undue influence on the planning process due to payments they make to political candidates and political parties. Queensland and New South Wales acted to ban campaign donations from property developers following scandalous revelations in those States. The revelations from the Victorian Independent Broad-based Anti-corruption Commission concerning payments to Casey Councillors and state MPs have been disgraceful. They have already prompted the sacking of the Casey Council and must lead to campaign donation reform in Victoria. Tasmania must act to ensure we do not make the same mistakes in planning as have been made on the mainland.

In addition, the ongoing white-anting of the Tasmanian Planning Commission, ministerial interference and appointment of property development lobbyists in Government reinforces the urgent need for an effective anti-corruption commission with teeth (unlike the current Tasmanian Integrity Commission).

Todd Dudley – Todd lives in north east Tasmania and has a long history of involvement in nature conservation and land use planning. He was a 2019 Senate candidate for the Sustainable Australia Party.

For comments here, see the Planning topic in the Forums.