Aboriginal and Torres Strait Islander readers are advised this article contains images and names of deceased people.
In 1839, George Augustus Robinson arrived in Melbourne as Chief Protector of Aborigines for the Port Phillip District, bringing with him a select group of Aboriginal guides from Tasmania, including a woman called Truganini. He could never have foreseen the dramatic and tragic consequence.

Sometime in August 1841, Truganini left Melbourne with her new husband Maulboyheener travelling toward Westernport, working for food and shelter at stations along the way.

On September 4, they were on James Horsfall’s Ballymarang station, where they were joined by their companions, Peevay, his wife Plorenernoopner, and Maytepueminer, wife of their friend Lacklay who had gone missing. All five were on a mission to find out what had happened to Lacklay, last heard of heading into Lower Westernport in May 1840. 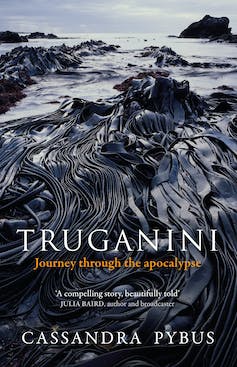 Despite the evidence of long-standing occupation in the exposed shell middens, the place was empty. When Samuel Anderson and Robert Massie first sailed from Launceston to the eastern shores of Westernport in 1835, they had found the Boonwurrung owners had been extinguished by the cumulative effect of encroachments from Van Diemen’s Land, endemic warfare with the Kurnai from Gippsland and attacks by sealers who ‘stole’ women, all compounded by epidemic disease. Negotiating the mangroves at the top of Westernport was torturous. The Koo-Wee-Rup Swamp spread for miles to the north and east making it near impossible to find a way through. Truganini and her companions were obliged to make a wide detour around it to find higher ground, where they followed the course of the Lang Lang River to the coast, where massive tide fluctuations had created an extensive inter-tidal zone providing a rich harvest of scallops, mussels, oysters, abalone, limpets, marine worms, crabs and burrowing shrimp.

On September 15, Anderson and Massie became aware that Truganini, Maulboyheener, Peevay, Plorenernoopner and Maytepueminer had established camp on their pastoral lease on the Bass River. The two squatters knew members of the group very well from their time working for the Van Diemen’s Land Company, where Anderson had been a bookkeeper and Massie the engineer. If anyone in Lower Westernport knew what had happened to Lacklay, it would be these two squatters.

While at Anderson and Massie’s station, the five almost certainly heard the same information they’d given to Assistant Protector William Thomas when he had come looking for Lacklay — known to him as Isaac — in the previous year: that he was last seen in the company of settler who lived at the end of Westernport Bay. Further inquiries by Thomas established the man in question was the skipper of a cutter that had sailed away from the far eastern tip of Westernport Bay. On board where a woman and her three children, plus Lacklay and an unnamed German man as the crew.

The night they sailed, a heavy squall had swept in from the Tasman Sea and the boat was presumed to have capsized, with everyone drowned, though no bodies or pieces of wreckage had been recovered. Thomas was not convinced, noting in the margin of his journal “the death of Isaac supposed”. 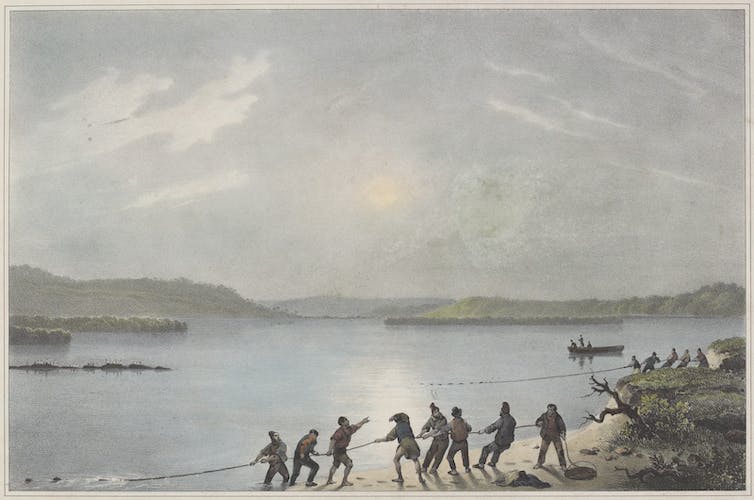 Thomas was right to have reservations about this narrative of death by drowning. The truth, only established 176 years later, was that the cutter did not capsize, but sailed all the way to the remote whaling port of Kororareka in New Zealand. At the time, there was no conceivable way that anyone in Port Phillip could have known the boat had managed to sail across the Tasman Sea.

Lacklay’s disappearance was left to speculation. A story that made much more sense than drowning was that he had been shot by a settler, a narrative everyone in Port Phillip was familiar with. Truganini and Maulboyheener had heard that version of the story too, and now were in Lower Westernport to investigate.

After a leisurely stay at Anderson and Massie’s run, the five moved off on September 29. They crossed the Powlett River and made camp close to the home of William Watson. He was the sole settler below the Bass River, having very recently arrived with his wife, daughter and son-in-law, Walter Ginman, in May 1841. Watson was employed by a consortium of investors to work the seam of coal that Anderson had discovered. He had sunk a shaft into the coal seam near the mouth of the Powlett River, where he built a rudimentary hut just above the high-water mark.

Watson welcomed Truganini and her friends, giving them tea and sugar and even lending them a kettle. On October 2, the fourth day of their visit, Watson and Ginman departed for the mine, and the five approached the hut and lingered in the yard until Mrs Watson came out to give them some more tea and sugar.

Some time later, the women began to scatter the bark from their shelters and pack up their belongings, while the men went to the hut to return the kettle.

Once the men gained entrance to the hut, the tone of their interactions suddenly shifted. The reasons why would only become clear much later.

Peevay went to look for Watson’s guns, while Maulboyheener took Mrs Watson and her daughter by the shoulders to propel them outside. There Truganini and Maytepueminer pulled them into the bush and pointed them in the direction of safety at Anderson and Massie’s station. Meanwhile, Peevay and Maulboyheener systematically stripped the hut of food staples, blankets, clothing, an axe, two guns and a supply of buckshot. After setting fire to the hut, the five loaded up their plunder and followed the river towards the coast.

Early that evening, Peevay and Maulboyheener lay concealed in the low coastal heath watching Watson and his son-in-law returning from the mine. When the two men came into range, they fired a volley of shots from several guns, hitting Ginman in the calf and slightly wounding Watson in the foot and elbow. Hobbling towards their hut, the two men saw their home was a smouldering ruin and their wives had vanished. It was well after dark when they reached Anderson and Massie’s station and found their wives unharmed. The next day, Massie supplied Watson with a brace of firearms and two of his workers for a search party.

Peevay and Maulboyheener must have known that Watson would come looking for them, and that he would likely shoot them on sight, yet they lingered at the Powlett River mouth for another four days.

Blood on the beach

Staying low, with the heath to provide cover, the five kept careful watch for Watson’s search party. From a high point on the sand dunes, they had an excellent view of the flat country to the north and east, the direction they knew danger would come from. They managed to avoid detection until the evening of October 5, when Watson caught a glimpse of Maulboyheener standing on a high dune. Several shots were fired, failing to wound Maulboyheener, although a bullet came close enough to make a neat hole in the coat he was wearing.

Alert to the danger from Watson’s party, Truganini’s group failed to notice six unarmed men approaching from the south, walking along the beach to Watson’s mine in the late afternoon on October 6. The six men had walked overland from the whaling station at Lady’s Bay, on Wilson’s Promontory, more than 50 miles away. Two of the whalers, known as Yankee and Cook, had set out to locate the miners while their companions entered the hut to rest. Minutes later, two shots rang out in quick succession. 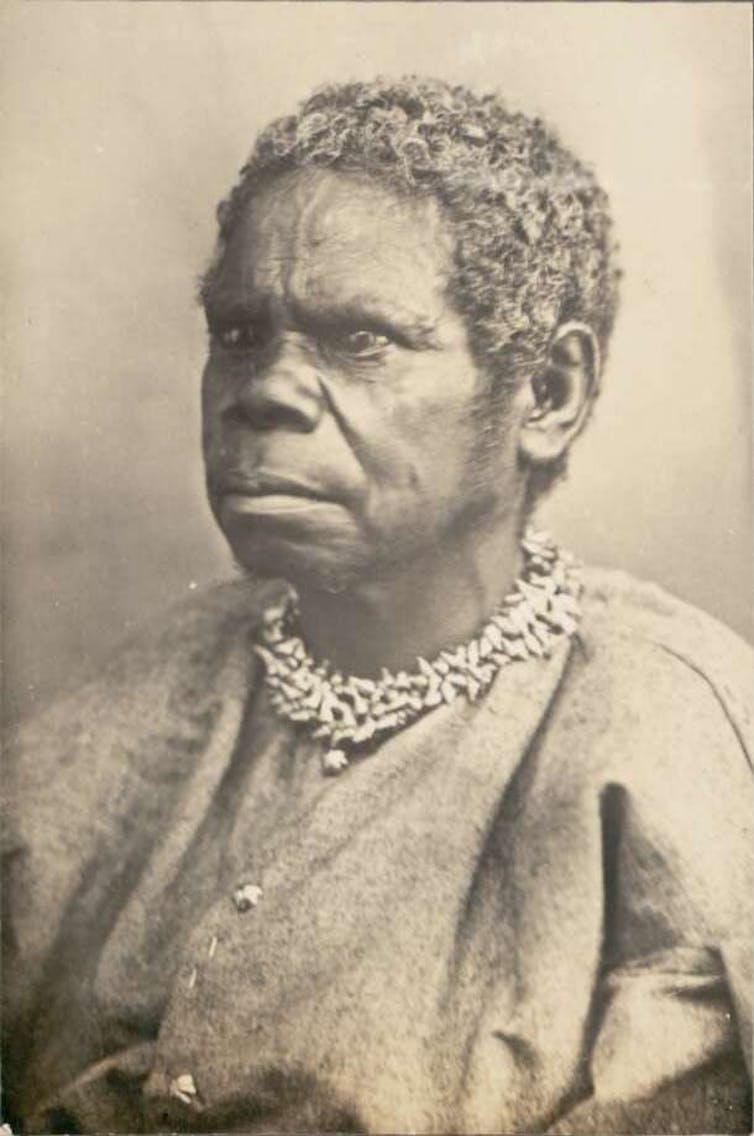 Truganini around 1866. C. A. Wooley/National Library of Australia.

Maulboyheener and Peevay had each fired, first one then the other, in such quick succession there was no time between to reload with powder and shot. Having seen the two men fall, Maulboyheener kept watch from the top of the dune while Peevay, Truganini, Plorenernoopner and Maytepueminer went down to the beach to check the fallen. Lying on the beach were two men they had never seen before: a shot had hit one in the head, killing him instantly, while the other had entered the second man’s side, leaving him grievously wounded and in agony.

The four returned with this terrible information to Maulboyheener, who pulled up a couple of strong tree roots and went alone to the beach to dispatch the wounded stranger with heavy blows to the back of his head. Watching from above, the three women cried in distress.

They were not the only ones watching. Having been woken by the gunshots, two more whalers, Robbins and Evans, stepped outside the hut to look about. They saw a party of four or five people, with what looked like two guns visible on a high dune some 200 yards away. The whalers could not distinguish whether these figures were male or female, but they observed some of the group going down to the beach, leaving a person with a gun watching from above. When they returned, the one who had been watching went down to the beach alone.

Believing they had seen a group of miners hunting birds or kangaroos, Robbins and Evans concluded there was no reason to be alarmed and went back inside to sleep. Waking about an hour later, Evans was disturbed to see his companions Yankee and Cook had not returned. This time he went to search for them. He was a few yards from the hut when Watson’s search party materialised, with their guns aimed right at him. Evans talked quickly and established that none of these men had fired the shots he’d heard earlier.

Alarmed, he enlisted Watson’s party to help search for Yankee and Cook and found their bodies on the beach, their blood staining the sand. Yankee was already cold, with a bullet wound behind his ear. Cook had a deep wound in his side and had been bludgeoned on the back of his head.

‘What could make you do it?’

It was another six weeks before the five were captured before dawn on November 20, in the coastal heath just south of the murder site. The search party was led by Land Commissioner Frederick Armand Powlett, after whom the river was named. It was comprised of 18 soldiers and policemen, reinforced by four settler volunteers with seven Kulin men as trackers.

“What could make you do it?” Powlett demanded. “We thought it was Watson,” Maulboyheener volunteered, and then fell silent.

Truganini and her companions arrived in Melbourne in chains on November 26. They were taken to the watchhouse, where committal proceedings commenced almost straightaway. Statements were taken from the whaler Evans, from Watson and his wife, from Powlett and members of the search party.

When the display of damning evidence concluded, Maulboyheener made a garbled attempt at a defence. Watson had tried to kill him, he explained, and when he saw the whalers he thought it was Watson and had fired his gun.

On December 2, Robinson and the Methodist minister Reverend Joseph Orton went to speak with the accused men. Peevay remained silent, but Maulboyheener gave an explanation for their otherwise inexplicable actions. Both Robinson and Orton separately recorded in their journals how Maulboyheener explained that James Horsfall of Ballymarang station had told them Watson had in fact killed their friend Lacklay. The men were sentenced and publicly hanged on January 20, 1842.

Edited extract from Truganini: journey through the apocalypse by Cassandra Pybus, published by Allen & Unwin.