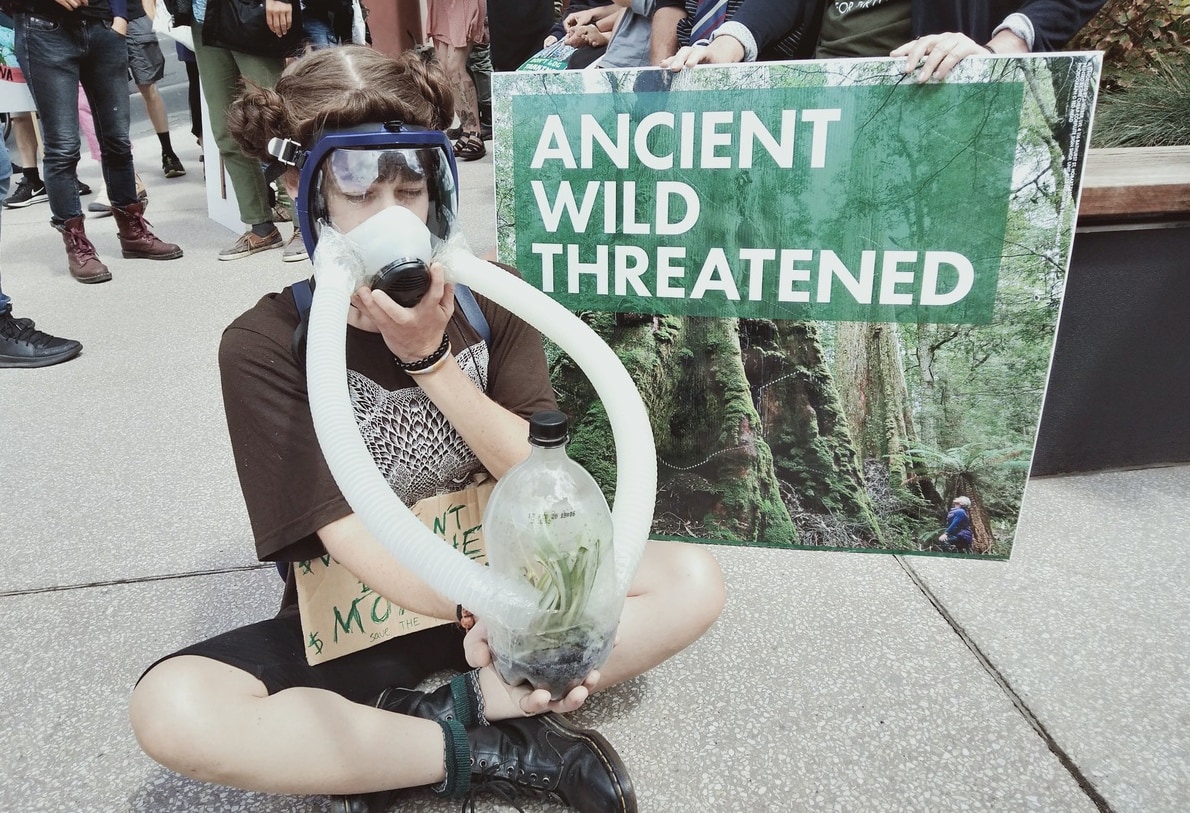 A noisy demonstration has called for the Premier to intervene to stop logging in the Tarkine.

The call came as nine protestors have been arrested in the Que River forest over the last three days. Charges laid against people attempting to halt the forestry operation include trespass and obstructing police. 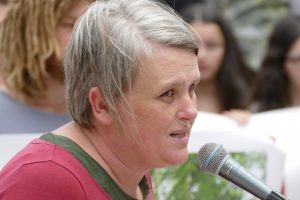 “We want to see the logging of this Tarkine forest stop, and so do all these hundreds of people here with us today,” said Jenny Weber of the Bob Brown Foundation. The Que River has coupes where Sustainable Timber Tasmania say they intend to harvest about 100 special species trees in an almost 54-hectare area of the forest.

The action in Hobart took place on the forecourt in front of the Executive Building. “It’s the intention to stand up for these forests, right in front the Premier’s office, to bring the issue right to him,” Weber said. Her suggestion was that the Premier announce a moratorium on logging in the Tarkine and help the industry to find alternatives.

“Lets go to the Tarkine,” she said in extending an invitation to Premier Peter Gutwein. “Let’s go and visit these ancient rainforests, and then let’s talk about immediate protection of the Tarkine and native forests across Tasmania.”

Weber said she did not trust logging company Britton Timbers and that climate science had moved on since the 2011 Forests Agreement. “The best way to respond to the climate emergency is intact forests being kept intact.”

She said that supporters were ‘rolling in’ to the area because they want the area protected.

In a joint statement, the Premier Gutwein and Guy Barnett, Minister for Resources, said that the permanent timber production land in the Que River area has previously been utilised for selective harvest, and was set aside for timber production as agreed by Labor and the Greens.

“Claims by the Greens that a 60 tree specialty-timber harvest from an area of our permanent timber production forests is akin to mass destruction is extraordinarily disingenuous, given it was Bob Brown himself who backed the provision of agreed areas for specialty timbers,” they said.

They characterised the current government as ‘committed to supporting our sustainable forestry industry’ in comparison to the ‘anti-jobs agenda’ of the Greens. 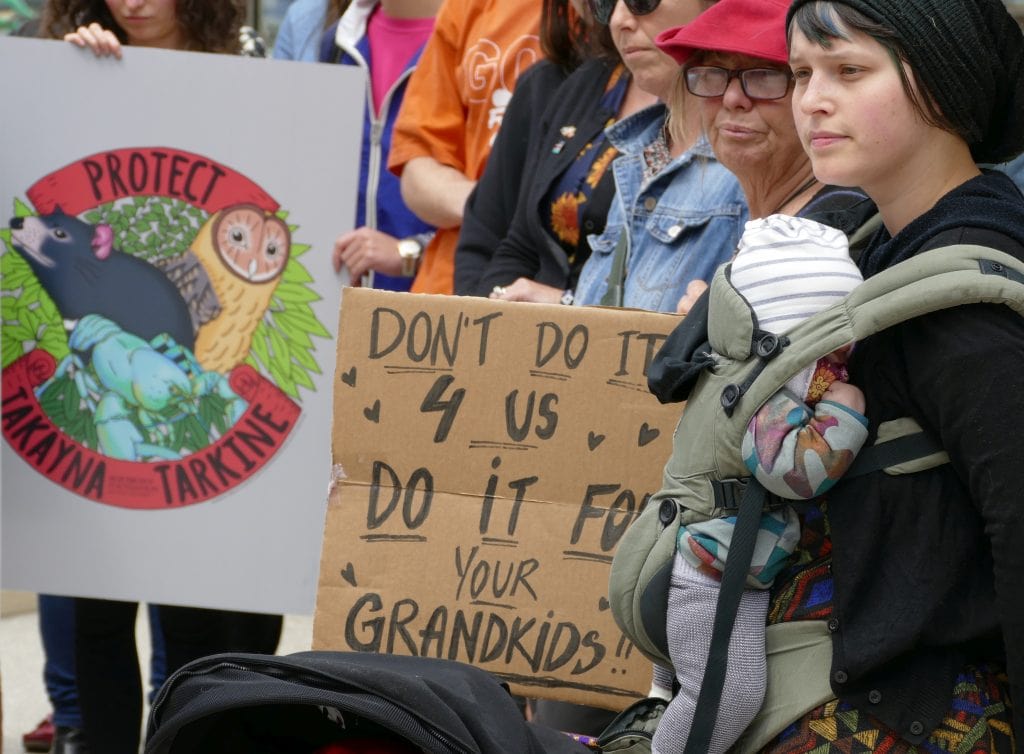 Greens’ Leader Cassy O’Connor echoed the calls for the Premier to take a stand.

“Premier Gutwein is faced with a choice between appeasing a destructive industry and listening to climate scientists and young people,” she said.

She described the takayna / Tarkine issue as a test for the Premier as newly  (self-) appointed Minister for Climate Change.

“The Intergovernmental Panel on Climate Change (IPCC) is oxygen clear in its assessment that deforestation must end if we’re to slow down global heating. It is wholly unnecessary to destroy native forests for timber and woodchips when Sustainable Timber Tasmania’s own data shows we have a huge plantation estate becoming available.”

She said old players in forest industries were a ‘mendicant faction’ and successive governments have let them get away with unsustainable practices.

“If he (the Premier) is serious about climate change, he needs to step in and protect Takayna’s unique, carbon-rich forests,” O’Connor concluded.

The peaceful demonstration lasted approximately 40 minutes and did not impede entry to the Executive Building. 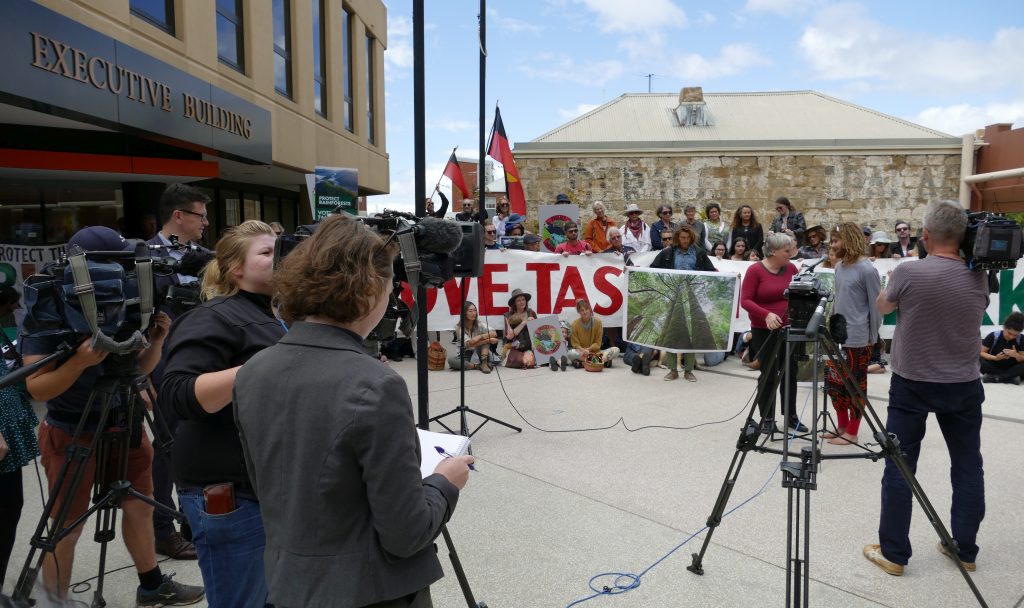