Glenorchy Council has resolved to enter into negotiations to sell the Derwent Entertainment Centre (DEC) and Wilkinsons Point to the Tasmanian government. The decision was made at the Council meeting held on Mon 23 December.

The rationale supplied was “to enable development of an iconic waterfront sports, retail and entertainment precinct and to realise a Tasmanian NBL Team (sic).”

In a media statement the Council expressed a view of the sale as “a positive for both the Glenorchy and Tasmanian communities.” The view was not attributed. The deal allows “a significant State entertainment facility to remain in public ownership. This means community events can continue to be supported by the DEC.”

The sale will purportedly facilitate the development of Wilkinsons Point. Council did not provide any evidence for projections of potential investment and employment quoted in the announcement.

The Council intends to retain the foreshore at Wilkinsons Point including the GASP infrastructure and adequate access.
It is expected that further details will be finalised in the coming weeks with announcements to be made in the coming months.

The Council did not elaborate on any requirement to spend proceeds of the sale on improvements to the facility and area, as mooted recently. 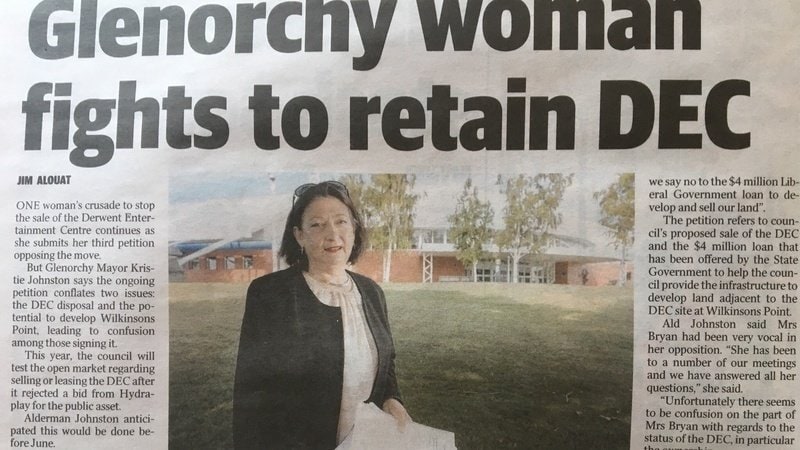 There has been some community opposition to the proposed sale with several petitions being circulated. Campaigner Janice Bryan of Montrose said she everyone should be very disappointed by the decision. “The community has not been informed of anything around this,” she claimed. “The asset should not be disposed of in this way. Glenorchy signed a binding agreement in 1987 that it would remain an entertainment centre.”

Columnist Greg Barns warned in The Mercury earlier this week of “hype, rhetoric and overblown claims…so it is with the mooted national league basketball team and the redevelopment of the Derwent Entertainment Centre.” Barns called for the Tasmanian taxpayer be given an opportunity to examine all the contractual and other documents which form the agreements between the respective parties.

A number of questions put by Tasmanian Times to the Glenorchy Council were unanswered. These questions related to the actual land area designated for sale, a target sale price, the specific state government entity involved and whether the Council was continuing to negotiate with the NBL franchise proponents. The Senior Communications Advisor stated that “we have no further information” (we wish to provide).