Moonah has a new radio station…at least for the next few weeks. And if that’s not enough fun for you, it’s being broadcast from a battered ute sitting in the courtyard of the Moonah Arts Centre.

Moonah Community Radio is a temporary community radio station at MAC, produced by radio queens Sisters Akousmatica. The broadcast is available online via Mixlr and on 97.1FM. 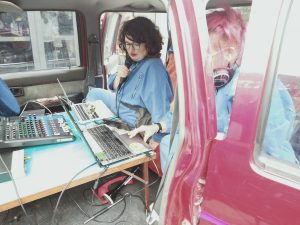