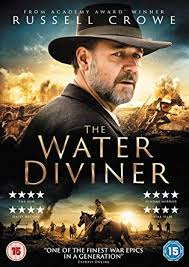 The Water Diviner was released in 2014. It stars Russell Crowe (who also directed the film), Olga Kurylenko, and Yılmaz Erdoğan. It tells the story of Joshua Connor, an Australian farmer, who, in 1919, travels from Australia to Turkey to find his three sons, who failed to return home after they left to fight in World War One in 1914.

In a real letter from the Imperial War Graves Unit in Gallipoli, there’s a sentence that says: “One old chap managed to get here from Australia looking for his son’s grave”. The writers of the film’s screenplay took inspiration from this.

The themes of The Water Diviner (family; love; hope; grief; home) are universal. They’re themes that exist in all our lives. But while they help viewers relate to the characters and the events that are happening, there’s a general lack of depth throughout the film. This is perhaps because it’s Russell Crowe’s directorial debut, and he made some rookie mistakes while making the film. I think more time should’ve been spent developing the relationships between the characters. But Crowe and the other actors deliver great performances, and the cinematography is spectacular. There are certain scenes that are filled with raw emotion as well.

The novelisation of the film, also released in 2014, provides much more depth. It expands on the characters’ backstories, and is filled with detailed descriptions of the locations Connor visits and passes through. I was better able to relate to the characters and events by reading the novel rather than watching the film.

The novel was written by one of the writers of the screenplay and his wife. It’s their first novel, and a very good first novel at that. I think it’s very well-written, and it’s clear from the descriptions of the characters and locations that they did their research.

But I believe Joshua and Ayshe (the proprietor of the hotel Joshua stays at in Turkey) gradually falling in love with each other should’ve been left out of both the film and the novel. I don’t think it needed to be there. Instead, Joshua should’ve spent time grieving for his wife, who took her own life just before he left for Turkey. Having him develop romantic feelings for another woman right after his wife’s death isn’t believable to me.

Overall, I think the film, despite its flaws, is a must-watch. The novel, on the other hand, is superior to the film, but it’s still bagged down by the story’s flaws.