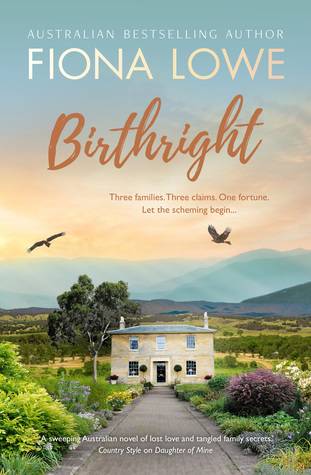 Fiona Lowe’s last novel ‘Daughter of Mine’ had a Tasmanian connection. It involved a storyline of a mother giving up her child and her subsequent search that led her to the Botanical Gardens in Hobart. Fiona certainly has a love for Tassie, citing Mt Field and Freycinet as particular favourites. She also loves some places closer to home in Victoria, like Mt Buller, Mount Hotham and Falls Creek, the later which is featured on the cover of her new novel ‘Birthright’.

Like her first novel, ‘Birthright’ is very much the story of family dynamics, friction between siblings and sometimes bitter battles as children attempt to endear themselves to their sometimes narcissistic mother in the hope of gaining an inheritance.

One child Sarah is doing well with a successful food company but is distracted by marital problems, meanwhile another child Cameron has managed to have his mother pay for his daughter’s school and extra-curricular activities.

The third child Elly has been estranged from the family, partly because of, to the family’s eyes, her lifestyle, choosing a father for her child which she chooses to raise alone. Ellie however, had good reason for her distance, forced to move away many years ago due to a disturbing event that happened to her. On her return, Sarah becomes aware of the horror Ellie has been through and she is more compassionate to her sister as Ellie finds the strength through a new relationship, to trust again.

Ellie is not the only one with secrets. Margaret has kept a secret about her husband from her children and Margaret holds her own secret which indirectly, has impacted on Ellie.

Fiona has written a novel that explores family dynamics and that most families have their imperfections.

‘Birthright’ is out now published by Harper Collins.