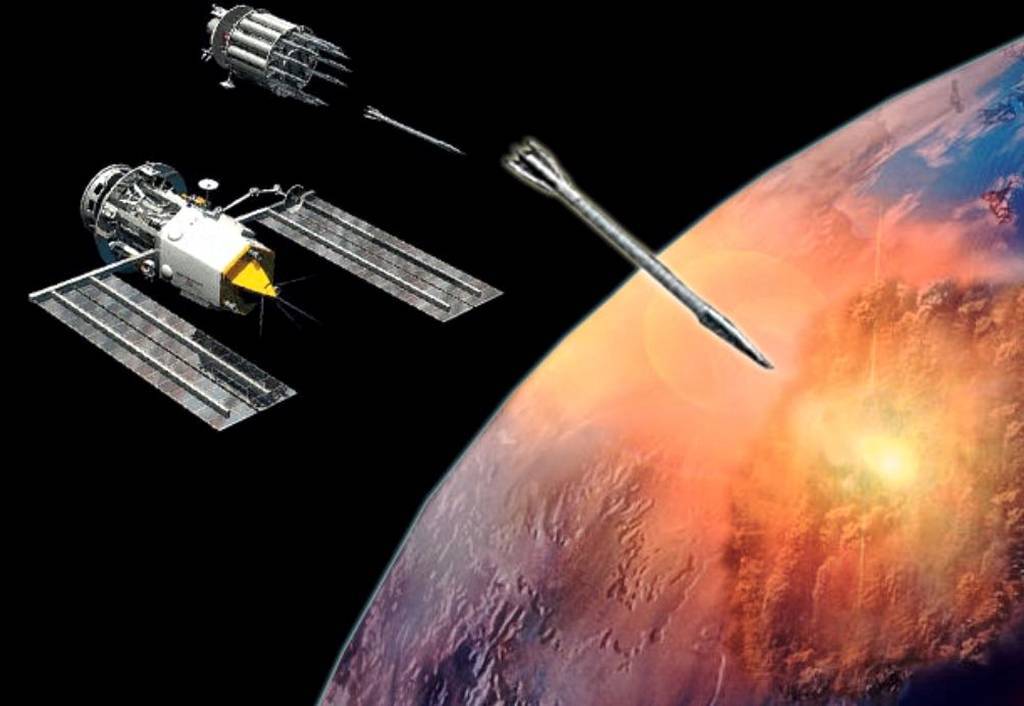 Could space development be blocked by the fear on Earth of being hit by an object from space that has the power of a small nuclear bomb?

The threat of asteroids is well appreciated, even to the size of the monster that sent the dinosaurs into extinction 66 million years ago.

Robert Heinlein explored the use of Moon rocks to fight a war with the Earth in his novel ~ The Moon is a Harsh Mistress.

Would one nation on Earth wait around for another nation in space to gain the ability to drop Moon rocks on their terrestrial cities, or asteroids, or metal rods?

A 2018 Pentagon report on China’s military intentions included “kinetic-kill missiles” as being on their wish list. [1]

This may not seem like such a huge problem at present, because the metal rods in question would be the size of a telegraph pole, would be costly to send into space, and efforts to do so may be monitored.

The problem of kinetic weapons takes on a deadly nature as a weapon of mass-destruction, when nations, or private companies, begin mining asteroids and the Moon.

Rather than launching metal rods from Earth, those rods of death could be made in space from mined materials, and in time, could become more numerous than ICBMs on Earth.

The great appeal of metal rods, is that they need no explosive material in them to work, drawing all their power from the kinetic energy of falling to Earth, and releasing that energy on impact, and with no radiation fallout.

Even without a human presence in space, automated and robot run factories and mining operations could run an assembly line to manufacture endless numbers of such weapons, and the factory could be hidden away on the dark side of the Moon.

Once on their way to a target, kinetic weapons travel so fast, they cannot be stopped.

How could a solid metal telegraph pole, falling to Earth at a very high velocity, be stopped?

The fear of such weapons may lead to great tension between space nations.

Hopes of founding a nation in space, as with Asgardia, may be grounded through fear by nations on Earth.

Is there a working solution to this problem?

Could peace be put to work?

A declaration of peace in space, and transparency of activity, could be the simple answer.

Considering the power of the Sun is a virtually infinite energy-well in space, and there is no lack of raw materials across the Solar System, there is plenty of space and income generating opportunities in space for all nations.

In space, everyone can be a winner, creating a stellar economy with no limits to growth among the stars.

A stellar economy could be designed to ensure that there is no unemployment, poverty, or homelessness, and that every citizen has a life-path, including a career, work, income, and a home.

Ensuring that all citizens of Earth will have a fair share of the wealth generated in space, could prove to be a powerful voice for peace on Earth.

To leap over the present and real threat of kinetic weapons being located in space, all nations on Earth could be invited to collaborate in space development, and work together to harvest the power of the Sun, mine resources, establish space factories, and build orbital space cities that offer an Earth gravity via rotation. [2]

In simple terms, once mining and manufacture is sustainable in space, and powered by the energy of the Sun, there is no further cost involved in space development, opening the way to unlimited production in space factories, and construction of space settlements, which could be located anywhere around the Solar System.

To avoid endless production lines of death in space, if every space nation worked together, and could see what every other space nation was doing, there would be no opportunity to harness space for the weapons of war to threaten cities on Earth, or in space.

The need for peace and transparency in space, could also lead to peace on Earth.

With no limit to expansion in space, there would be no need for nations to be in conflict on Earth.

If the nations will not consider peace and transparency in space, the outcome could be war in space that blocks space development, and worse.

Any conflict in space may also trigger the long feared space junk cascade, which could destroy all satellites and space stations, leaving a maelstrom of high velocity debris that blocks access to space for hundreds of years. [3]

It is believed that a chip in the observation window of the International Space Station was caused by a flake of paint, hitting at high velocity. [4]

In the vacuum of space, there is no drag on any object to slow it down.

If, or when, that space junk cascade happens, space debris flying in at high velocity may also destroy planes and make air travel too dangerous.

Without satellites, without space exploration, and even without planes, humankind would be plunged into a rather dark and miserable future.

The loss of military satellites may also trigger conflicts on Earth, which could all too easily slide into nuclear madness.

Investing in peace and transparency in space, may therefore prove to be the key to human survival.

With peace in space, and also on Earth, we could look toward an amazing and creative future among the stars.

It would be far better for creativity to displace conflict in space, than for conflict to displace humans in the Universe.

If space is the key to peace, we can wonder about that, and how soon we can get there.

“Seventh, China’s military ambitions extend to space: it wishes to acquire “counterspace capabilities, including kinetic-kill missiles, ground-based lasers, and orbiting space robots, as well as to expand space surveillance capabilities that can monitor objects across the globe and in space and enable counterspace actions.””

ABOUT KIM PEART ~
After following the Space Race to the Moon during high school years, Kim engaged in the space vision in 1976, with proposals by the Princeton physics professor, Gerard K. O’Neill, to build orbital space habitats. In 2011 he founded Space Pioneers, and serves as director. In September 2017 Kim was in Adelaide for the five day International Astronautical Congress, where an Australian Space Agency was launched on the first day. This year Kim will be travelling to Washington, D.C., for the 2019 International Astronautical Congress, where Space Pioneers will have a booth in the Exhibitions Hall, just along from NASA. Kim recently wrote a document detailing the Space Pioneers vision, called The Message, which includes a photo essay of Space Pioneers’ work to develop ways to use the virtual worlds in space development, and also build a global space community. NASA develops virtual worlds for use in deep space missions, and bases, such as on the Moon, where we can expect Australian astronomers to be star-gazing in the not too distant future. The Message ~