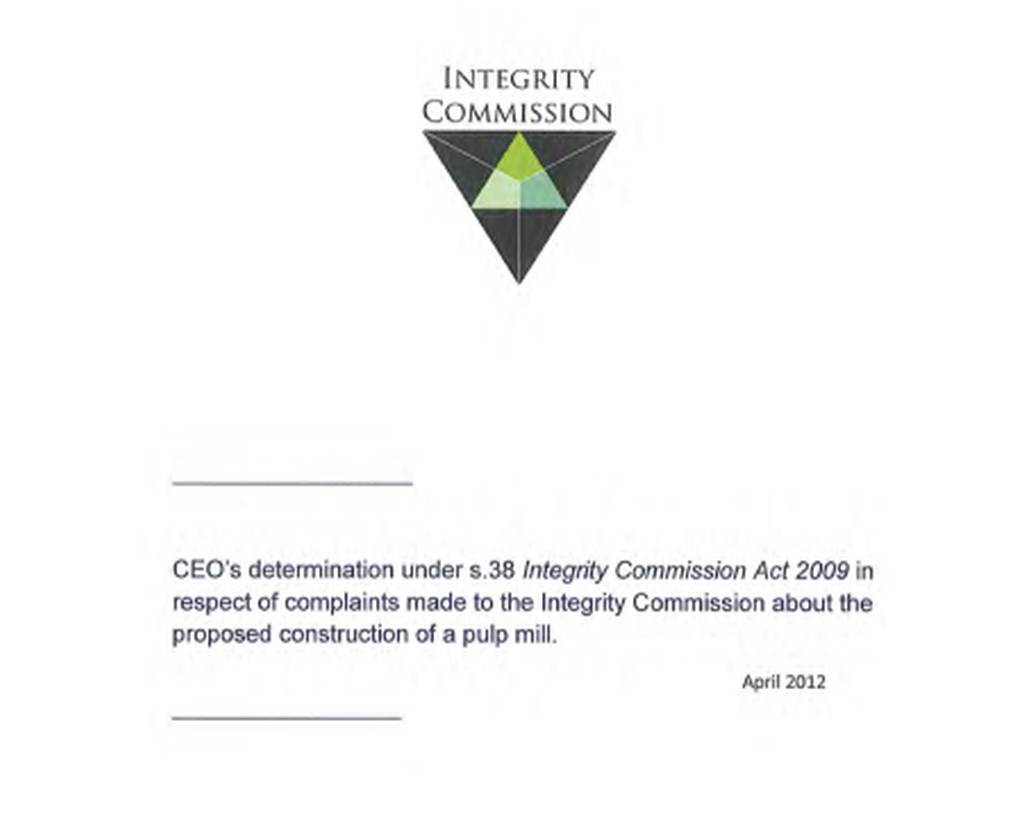 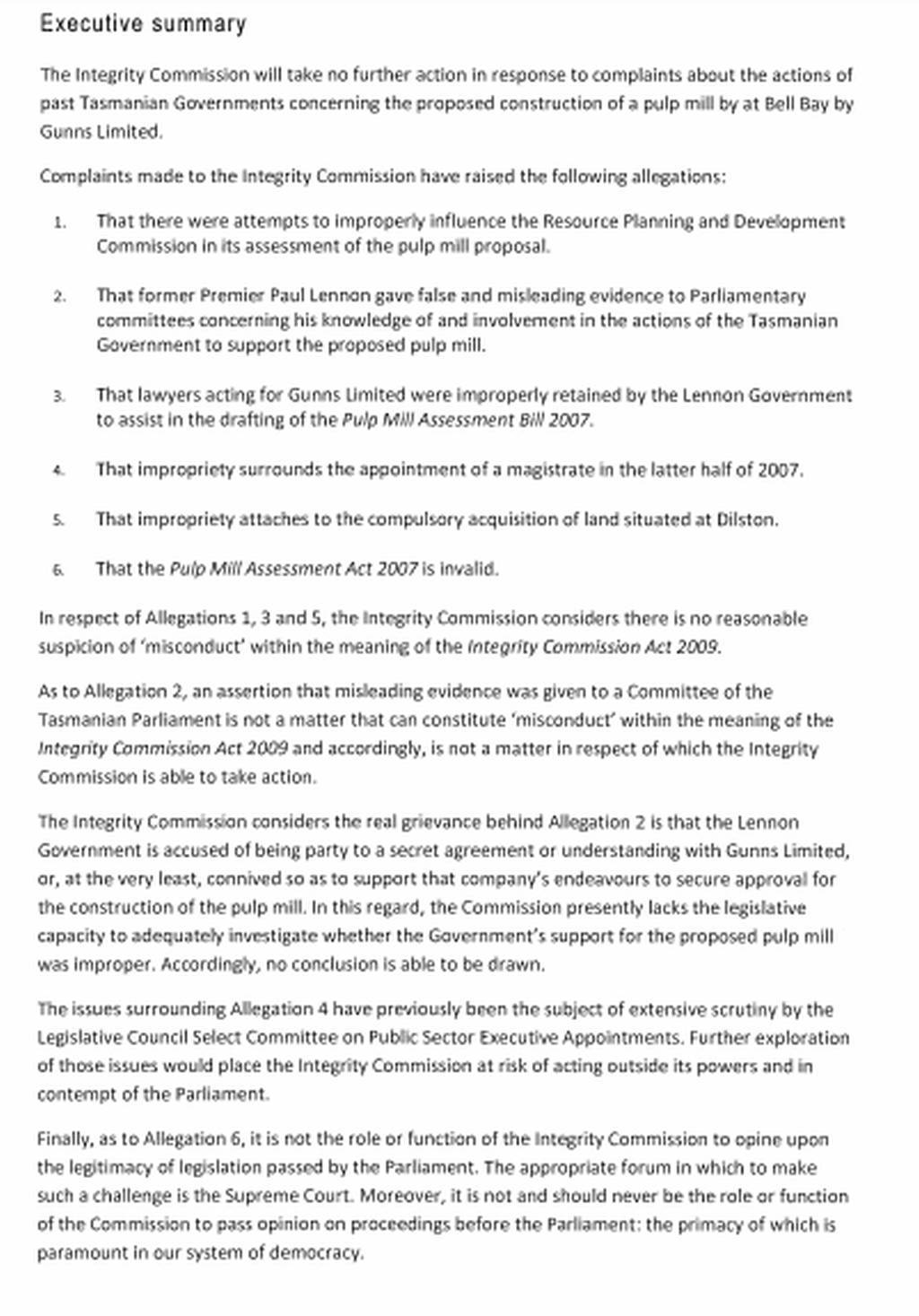 The powers that be in Tasmania have had their attention drawn to the deficiencies within the Tasmanian Integrity Commission and have done absolutely nothing about them.

The Commission takes no further position on whether it should, or should not, have the powers and resourcing to investigate systemic or institutionalised corruption. Ultimately it is for the Government of the day and the Tasmanian community as a whole to debate the issue, and to subsequently ensure that the Commission has the appropriate legislation and resources to achieve the objectives of the Integrity Commission Act.”

In other words the Act as created protects those that govern and rule in Tasmania from prosecution or for that matter investigation in all matters relating to corruption.

This was I suggest done with both purpose and intent when the Act was drafted by colluding Pollies be they Liberal or Labor to protect their own skin if they had the misfortune to be found out when acting corruptly.

It has resulted in the protection of those involved in corrupt acts relating to the Pulp Mill.

Their cases were dismissed as being outside the remit of the Act and therefore incapable of investigation. How can this be so?

In October 2014, the Tasmanian Integrity Commission released a report highlighting what it believed to be a significant weakness in the legislative regime under which it operates—that is, the lack of a ‘misconduct in public office’ offence in the Tasmanian criminal code.

Those that govern us in Tasmania are not interested in being caught out by an Integrity Commission and the Liberal Party under SCO MO will be no different.

They will recreate a Tasmanian Lite Corruption Commission given half the chance.

We are dealing with bad people who only act out of self- interest and we must not forget it.

With this in mind I would like to think the proposed new Federal Act will embrace this scenario as detailed in Hansard:

The following important speech  by Senator Whish – Wilson regarding the need for a Federal ICAC was made in the Senate  Tuesday, 20 June 2017. This matter is now coming to a head as the Liberals move to take the high moral ground in an effort to win an election,

We do not need window dressing we need proper legislation with real teeth.

I would like to think that under any new legislation this case of blatant corruption over due process will be the first cab off the Tasmanian rank.

Now to my adjournment speech that I gave last week. I would like to put a little case study together and refer directly to an article in the Tasmanian Times I referred to—in the last paragraph. The article is by Mr John Hawkins from Chudleigh, and you can download it on www.tasmaniantimes.com.au. The article is termed ‘Why …?’ and was written on 20 April 2017. In this article, John Hawkins outlines that on 27 January 2006, Tasmanian senator Eric Abetz became the federal Minister for Forestry in the John Howard Liberal government. Hawkins then states:

On the 16th March 2006, some 6 weeks later, Abetz lunched with Ian Blanden, CEO of Gunns Plantation Schemes, and discussed the Gunns Pulp mill, MIS plantations and the 12 month pre-payment rule with no sunset provision.

‘These matters’, at the time were, ‘vital to the future solvency of both Gunns’s business’ and many in the MIS forestry plantation industry. Hawkins notes:

This conversation was documented by the Chairman of Gunns Ltd John Gay in a letter to Abetz dated 29 March 2006 on Gunns Ltd company letterhead and sent to the Minister. (Document 1).

Hawkins asks: why? He then asks:

A large political donation made outside the electoral cycle is unusual. It was, I suggest, made with the sole aim of gaining the ear of the Minister for Forests, one Senator Eric Abetz.

He then goes on to say:

Abetz was in a position to protect and promote the highly-profitable Ponzi Nitens Woodlot Managed Investment Scheme … that were at this time keeping Gunns Ltd solvent. The demise of these schemes through ATO action caused their promoters to finally call in the liquidators.

I went into this in significant detail in the first half of this speech.

At the time, Senator Abetz was negotiating with Minister Peter Dutton, then Minister for Revenue and Assistant Treasurer, on changes to managed investment schemes. I just note that the $50,000 donation to the Liberal Party was authorised by Mr John Gay, the CEO at the time, who was subsequently convicted of insider trading but who was then chairman of Gunns Ltd. Mr Hawkins further states:

By 22 June at the latest … Abetz reports to Gay—

This refers to document 3, a letter from Senator Abetz to Mr Gay. Mr Hawkins continues:

Unaware of this $50,000 … donation, I wrote to the Financial Review expressing my concerns.

Abetz then sent two goons to my front door to threaten me. I informed them that the days of the Third Reich and jackboots were over and that they should return to their master and tell him that I would pursue him to the grave.

This is a public document on a public website and available for anyone who wants to read it.

Mr Hawkins claims that these political donations, which were made to the Liberal Party—as I outlined last week—and also to the Labor Party, were unduly influencing policy, which later turned out to be a total catastrophe for so many investors around this country, not to mention rural communities. I would note for anyone interested to read document 7, which is Mr Hawkins’ letter to Mr Abetz, where he says: ‘I am not saying anything about personal corruption. I am just saying that it looks really bad that you took donations of $120,000 after you became forestry minister and after you changed MIS policy which favoured these companies. His letter states:

I have no problem with corporate gifts to political parties during election campaigns, but when you back a winner after the race and the bet is accepted this is easily misconstrued and can have sinister connotations.

Your thoughts would oblige.

This is very important, as I stated last week, because the current matter of public interest is significant around political donations. It is not just a national issue; it very much applies to my home state of Tasmania. There is legitimate concern in the community that not everyone has the same opportunity to lobby decision-makers or to donate to political parties, and that those with the deepest pockets and the most power and connection are better able to influence policy making. The secretive way most lobbyists and donors currently operate means that the public cannot be confident that decisions are being made in the public interest and on merit, after considering a broad range of views. The Greens have before this chamber three private senators’ bills for an independent ICAC, an integrity commission and donation lobbying reform. It is time that we actually got on with it. (Time expired)

John Hawkins born and educated in England. He has lived in Tasmania for 13 years. He is the author of “Australian Silver 1800–1900” and “Thomas Cole and Victorian Clockmaking” and “The Hawkins Zoomorphic Collection” as well as “The Al Tajir Collection of Silver and Gold” and nearly 100 articles on the Australian Decorative Arts. He is a Past President and Life Member of The Australian Art & Antique Dealers Association. John has lived in Australia for 50 years and is 75 this year. In two of the world’s longest endurance marathons and in the only teams to ever complete these two events, he drove his four-in-hand team from Melbourne to Sydney in 1985 and from Sydney to Brisbane in 1988.