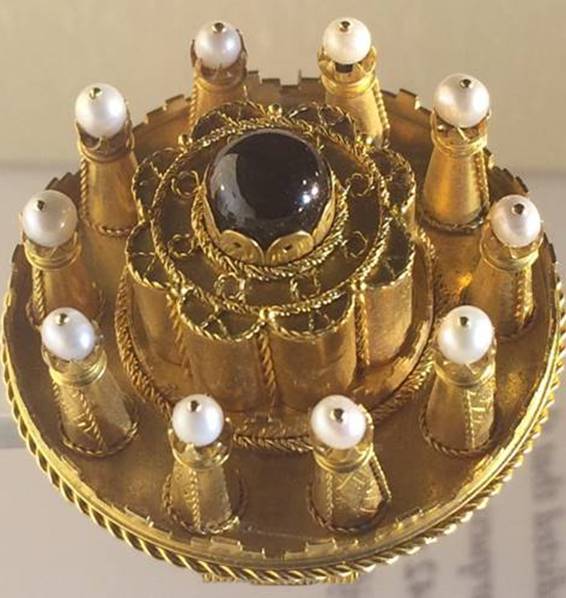 “Whence the broach of burning gold
That clasps the Chieftain’s mantle-fold,
Wrought and chased with rare device,
Studded fair with gems of price,.”

Second canto The Lord of Isles, a poem by Sir Walter Scott (1815)

A circular gold plaid broach presented by Prince Albert Saxe-Coburg and Gotha to Queen Victoria, engraved on the reverse ‘From Albert/Nov 21 1842’, the date of the second birthday of their first-born child, ‘Victoria’ the ‘Princess Royal’.

Centred with a garnet, it is surrounded by ten ‘turrets’ each set with a Scottish freshwater pearl. The brooch was given by the Prince to the Queen on 10th February 1843, exactly two years after their daughter had been christened. The entry in the Queen’s journal of that day reads:

My beloved Albert gave me a lovely brooch, which is so original in design, & which I am delighted with.

The form was inspired by the celebrated Brooch of Lorne, a silver turreted disc brooch allegedly taken in battle from Robert the Bruce (Robert I of Scotland) at the battle of Dalrigh in 1307.

This jewel was shown to Queen Victoria by the head of the MacDougall clan on 10th September 1842 during a visit to Perthshire.

During her stay at Drummond Castle, the Queen wrote in her journal:

Capt: McDougal, who steered, & is the head of the McDougal’s showed us the real brooch of Lorne, which was taken by his ancestor from Robert Bruce, in a battle. They sang 2 Gaelic songs, so wild & singular, the language, so guttural, — sometimes a little resembling German.

The Brooch of Lorne, originally serving to secure a cloak or plaid of a lady, was at this date considered as part of a complete set of male ‘Highland Garb’.

It is possibly contemporary with two further West Highland examples of similar composition, one known as the Ugadale brooch, and a third the inspiration for this brooch, the Lochbuie brooch now in the British Museum. All three have a reliquary beneath their centre charmstone and were originally worn by women.

Only the Maclaine Brooch of Lochbuie brooch is ten-turreted, the other two examples bearing eight turrets.

The three jewels were exhibited together in the British Museum’s exhibition ‘Shakespeare Staging the World’ in 2012.

Queen Victoria’s purchase of Balmoral in 1848, and the subsequent wearing of Highland dress by the Royal family in Scotland, instigated a widespread fashion for plaid brooches of which the Albert is the finest, earliest, and best documented surviving 19th century example. 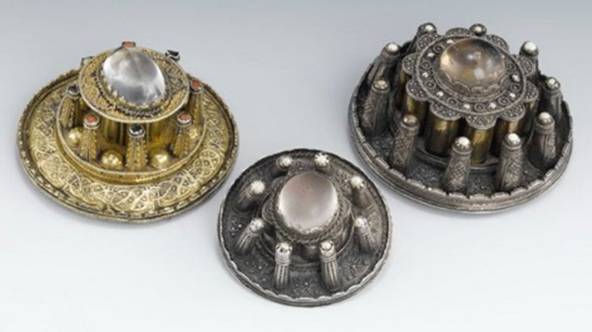 A comparison indicates that the Lorne and Lochbuie brooches are by the same hand. Ugadale is more complex and probably 19th century. 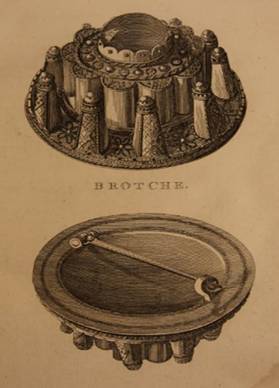 The underside view depicts a twisted wire filigree band and a single filigree diamond fret decoration to the tower as seen on the Royal gold broach. 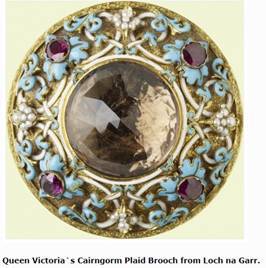 Prince Albert and Queen Victoria on their last day of visit to Balmoral in September 1848 decided they wanted to climb the highest peak, known Loch na garr. The weather was inclement with heavy mists, the Queen rode a pony while Prince Albert walked, before they reached the summit, the Queen’s advisors insisted she go no further but Prince Albert was determined to make it to the top, which he did and while up there, he found this cairngorm. Cairngorm is a form of quartz, often found in the ‘The Cairngorms’ but it also occurs randomly around Scotland. When they returned to London the Prince had the stone cut and set in gold in the style of a Celtic plaid brooch with a wide gold frame decorated with enamel, seed pearls & garnets. He presented the brooch to Queen Victoria on 21st November 1848 as a souvenir of their trip, as well as to mark their daughter Victoria’s 8th birthday. It is engraved on the reverse ‘Loch na Garr’ 27th September 1848. Later Queen Victoria left this brooch as an heirloom of the crown. 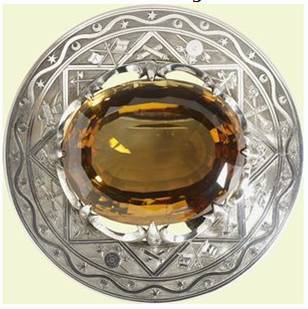 This brooch and another one in a similar style were bought in Dublin in August 1849 by Prince Albert for Queen Victoria. The brooch is silver and modelled on an antique Irish brooch, a variant of the Ogham Brooch a 9th century piece from Ballyspellan engraved with Celtic knotwork. The cabochon garnets are a C19 enrichment, the original having silver beads. Prince Albert presented this brooch to Queen Victoria for Christmas 1849 and she later designated it as an Heirloom of the Crown. The Royal Collection. 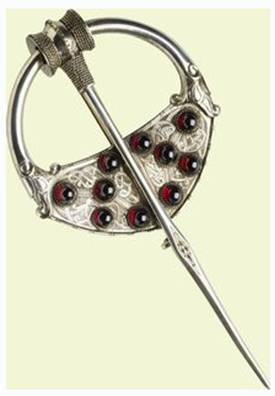 Other royal presents relate to their first – born children; the Princess Royal and the Prince of Wales gifted by Prince Albert to Queen Victoria

Between the demise of Rundell Bridge & Co as the Crown Jewellers and the appointment of R. & S. Garrard as Crown Jewellers in 1843 there was a window of opportunity for the Queens new German husband to exert his influence over the creation of Royal jewels.

The firm of Kitching and Abud temporarily filled the gap on their appointment as Jewellers to the Queen from 1837 and they continued to work for the Prince until at least 1845.

Prince Albert used this firm to create the sapphire and diamond coronet recently sold by Hawkins and Hawkins to the V&A. 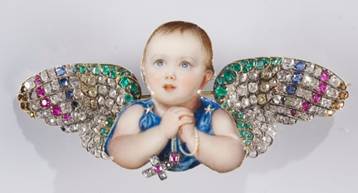 The birth of their first child Victoria, the Princess Royal saw the creation by Prince Albert, through his interest and knowledge of art and history, of the Winged Cherubim Brooch, based on the cherubs in Raphael’s Sistine Madonna in Dresden. This brooch given to the Queen in December 1841 is recorded in her Journal as being ‘entirely his own idea and taste’. 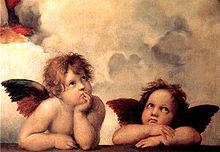 A prominent element within the Raphael painting are the winged cherubims (Angels with two wings). In 1913 Gustav Kobbé declared that “no cherub or group of cherubs is so famous as the two that lean on the altar top indicated at the very bottom of this picture. According to a 1912 article in Fra Magazine, when Raphael was painting the Madonna the children of his model would come in to watch. Struck by their posture he added them to the painting exactly as he saw them.

Another story, recounted in St. Nicholas Magazine, of 1912 says that Raphael was inspired by two children he encountered on the street when he saw them ‘looking wistfully into the window of a baker’s shop’.

On receiving the brooch Queen Victoria declared “The workmanship and design are exquisite and dear Albert was so pleased at my delight it having being entirely his own idea and taste”. A miniature painting of the child by Ross, from a copy of one by William Essex was cut up and enamelled on gold, then bejewelled wings were mounted on the shoulders, made from diamonds, sapphires, emeralds, rubies, and topazes. In her hand she is clutching a string of pearls from which hangs a real diamond and ruby cross. Sometime after Prince Alberts death. Queen Victoria gave this brooch to her daughter, The Princess Royal. Later when Empress of Germany, she explained the brooch’s history “Papa gave it to Mama and she always wore it on my birthday”. Included with her note is a little drawing and instructions as to its disposal: “This brooch was given to me by my beloved Mama at Windsor, she had worn it a great deal. I should like it left to the Crown of England”. Hence making the brooch an Heirloom of the Crown. The Royal Collection. 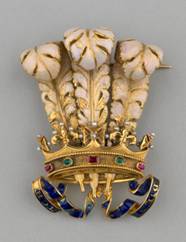 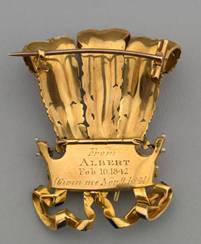 Prince Albert had this brooch made as a gift to the Queen to celebrate the birth of Edward the Prince of Wales on 9th November 1841. The Prince of Wales coronet is set with rubies and emeralds around the base with round pearls on the the points, in the crosses and on the fleur de lys. Out of the crown are three gold feathers, enamelled in white and below the crown is a blue enamelled ribbon with the Prince of Wales motto “Ich Dien”. The all gold back of the brooch is engraved From/ ALBERT /Feb 10th 1842, the day Prince Albert gifted the brooch. The brooch now on the Royal Collection, was left by Queen Victoria as an Heirloom of the Crown. 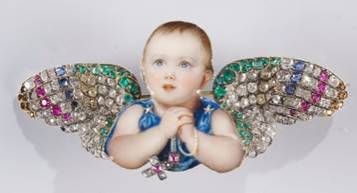 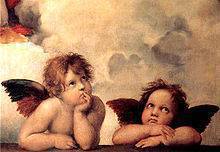