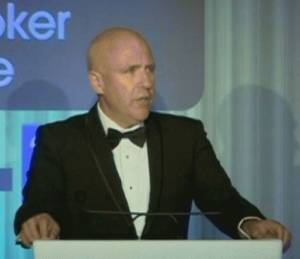 *Pic: The moment Richard Flanagan won the 2014 Booker prize … Read all about it HERE and HERE

In the full transcript of his speech to the Garma festival, the author says the country can make itself stronger by saying yes to the Uluru statement …

When my father died at the age of 98 he had largely divested himself of possessions. Among what little remained was an old desk in which he had collected various writings precious to him over the years: poems, sayings, quotes, a few pieces he had written, some correspondence. Among them my elder sister found a letter written by one of my father’s cousins many years before. In it she told my father that his mother, my grandmother, was of Aboriginal descent, and that in her family she had been brought up to never mention this fact outside of the home.

My father loved discussing interesting letters with his family. He never discussed this letter. Yet he kept it. The story of covering up Indigenous pasts was a common one in Tasmania, where such behaviour was for some a form of survival. There is no documentation to prove my father’s cousin’s story is true, but that doesn’t make it untrue. It leaves the story as an unanswerable question mark over my family.

The theme of this year’s Garma festival is truth telling. My father’s story is about the questions truth raises, and where the truth takes us. I don’t tell this story to claim I am an Indigenous. I have too much respect for Indigenous people to make such a claim.

And yet, if it were correct, it would explain so much that is inexplicable about my father. It would make sense of his beliefs in reincarnation as wombats and wallabies, beliefs strangely at odds with those of an ostensible Catholic born in 1914, as were his strong, almost obsessive feeling for his ancestors and for the land of the island’s north-east.

It would make some sense of my father’s odd, wry acceptance of the two times he suffered the indignity of being refused service in bars as a “half-caste” when we went on a family camping trip to Western Australia in the 70s. It was, I later learned, not the first time. In a PoW camp in Japan an English PoW refused to work with him on the grounds he would not lower himself to work with a “half breed”.

Our family, like so many other Australian families, has numerous Indigenous connections. I have Indigenous cousins. My brother’s first grandson is Indigenous. But the questions remain hanging over us, as they remain over all Australians.

Who are we? Where do we come from? Where are we going?

I have flown the great length of our vast nation to speak to you, from the snow and rainforest and rivers of the island of the Palawa in the far south, to here, the country of the Yolngu in the far north-east, a country almost mythical for its music, its art, its leadership. Five thousand kilometres I travelled, twice the distance of London to Moscow.

And as I boarded flight after flight, making my way slowly northwards, I wondered what joins us over such a vast expanse, what connects wintry worlds with tropical? What finally joins us as people into this idea that we call Australia?

And yet, in recent years, that story has grown increasingly threadbare as the poverty of its original conception has been revealed as too thin to hold, as the warp and weft of our national myths have under strain torn apart, only to be covered up with rougher patches crudely stitched into the growing holes: war memorials, Captain Cook statues. It was, as they say, a bad day when the first blackfella discovered Captain Cook.

Australia has achieved many great things as a state. But it will fail as a nation if it cannot find a way of admitting our Indigenous people, and with them, our continent’s extraordinary patrimony: 60,000 years of civilisation. When the first corals began to form of what we now know as the Great Barrier Reef that civilisation was already 50,000 years old. They had known unimaginable changes of climate, ecology and zoology. We stand as the inheritors of a people whose languages, cultures and Dreamings are founded in that experience of deep time unknown to humanity anywhere else in the world …

Read the rest of this brilliant article, The Guardian, HERE