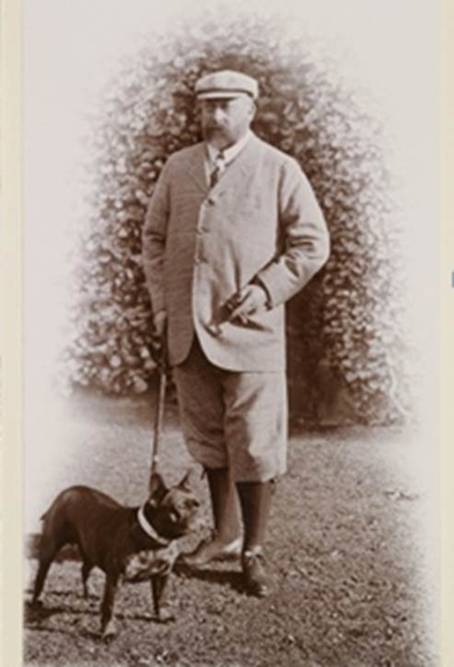 The future King Edward VII married the Danish Princess Alexandra in 1863, three years later the future Tsar Alexander III married, her sister, Princess Dagmar. The first bulldog owned by either sister seems to have been the English fawn/cream dog with cropped rose-ears belonging to the Tsar or more probably his wife seen above with her sister during a visit to her childhood home in Denmark. Edward VII and his wife were to create a new fashion with their ownership of a newly created breed of dog; the bat eared French Bulldog before 1900. Both great dog lovers, owners and breeders their kennels at Sandringham were important and extensive. Vassalika one of a pair of breeding Borzoi given to the couple by her sister the Empress of Russia was modelled in wax and later cast in silver for the Queen by Frodman-Cluzel who was sent from Russia by Faberge to model the Sandringham Commission.

In 1901 on a visit to Sandringham Sarah Tooley, a writer at the Lady’s Realm, notes;

The final dogs on view were the King’s French bulldogs, a fox terrier named Swift, a ‘little black pug’, and the Prince of Wales’ dog, Heather.

Of these dogs, at this date, King Edward’s Peter, a brindle French bat-eared bulldog without a docked tail is the most well-known.

Queen Alexandra also had a brindle French bat-eared bulldog, presumably from the same litter and source as Peter, and named Paul.

Another French bulldog owned by English king and queen was a pied French Bulldog with bat-ears. A painted miniature of this dog is interesting, as it documents the kennel name at Sandringham. It could be from the Royal Kennels that Prince Felix Yusupov obtained Punch.

King Edward VII’s initial idea for the ‘Sandringham Commission’ of hardstone animals was for Fabergé to immortalise his favourite dogs and racehorses, a commission that eventually extended to other animals on the Sandringham Estate. None of the bulldogs are known to have been replicated to the standard of his then favourite dog Caesar, arguably the most important subject of the commission, and indeed, when the King unveiled the wax models Fabergé’s team had prepared on the Norfolk Estate, Caesar was by his side.

This superb miniature statuette of the King’s Norfolk wire fox terrier bred by the Duchess of Newcastle was modelled in St. Petersburg. Caesar has a gold and enamelled collar inscribed “I belong to the King”, a third Fabergé dog, mounted with a gold and enamel collar as a portrait of a specific dog. Caesar walked on a lead, held by a Highlander, behind the coffin of his master the King in his funeral cortege and is immortalised in stone, sitting at the feet of the King, on his tomb in St. Georges Chapel, Windsor.

Carved from chalcedony, the image was purchased for £35 on 29 November 1910 from the London branch of Fabergé, and not by the King but by the Hon. Mrs Greville who gave the model to Queen Alexandra. I suggest the price was greatly reduced as the original customer, the King, and possibly through ill health, had been prevented from collecting the statuette before his death on the 6 May 1910, and this was deemed by all concerned to be a suitable solution.

King Edward VII had commissioned Fabergé to create the statuette of Caesar in December 1907, together with a portrait of his son’s favourite dog, Sandringham Lucy, after the unveiling of the animals in wax by Fabergé’s sculptors in the Dairy at Sandringham. It took Fabergé until October 1909 to finish the first of these two portrait commissions. Sandringham Lucy, which was purchased from Fabergé on the 15 October 1909 by the Prince of Wales, later King George V, at a cost of £102.

These specific dog portraits of Caesar and Sandringham Lucy were carved in-house at Fabergé by either Kulikov or Peter Derbyshev. The latter appears to have been conscripted and he died soon after the outbreak of the war in 1914. They are in a totally different league to other figurines in the Royal Collection, many of which were carved in Ider–Oberstein and sold by Fabergé London as potential presents to the British Royal family.

Sandringham Lucy. The property of the Prince of Wales. RCIN 40442

The two commissioned statuettes Caesar and Sandringham Lucy join Custer and Cody as the ultimate in animal portraits specifically commissioned for their discerning owners. Their life-like stance, accurate choice of stone for rendition of colour and the standard of execution have never been bettered in miniature animal sculpture. Carved out of one stone, they leave no room for error. It should be noted that a multi-stoned figure allows for mistakes to be corrected should damage occur or the colour change during the carving by the fitting of a new section.

King George V also purchased a model of an English Bulldog from Fabergé’s London branch, stock no 19470 on 7 November 1910, Bulldog brown agate white opaq… enl collar. £38. It seems unlikely that King Edward VII ordered this model as part of the Sandringham Commission as he is believed to have owned French Bulldogs only.

This, a poorly realised carving of an English Bulldog, is on a larger scale than the majority of the Sandringham animal carvings. This larger scale should have dictated a higher-than-average cost price than the £38 charged, and so must be compared with the known second hand price of £90 for the Grand Duke Alexei’s Custer on the 21 November 1916 and the £102 pounds for Sandringham Lucy, both specific colour matched animal portraits made in St. Petersburg.

I suggest that we see here the London branch of the Fabergé firm buying lesser quality models from Germany to satisfy demand. This would account for a duplicate in obsidian in the Virginia Museum of Fine Arts also sold by Fabergé in London, probably as per the account of 14 December 1916 to Mrs W. B. Leeds Bulldog obsidian, collar in gold and white opq. enamel, Stock Number 23475, 68 pounds…. cost price 342 roubles. (Information supplied by Christel McCanless whose Fabergé site is the best and most important source for original research into objects by Fabergé ).

The museum should look for the faint, scratched stock number to confirm this matter.

If the English Bulldog was ordered by Edward VII it maybe that the standard of carving was the reason for non-collection or payment in his lifetime, a factor that may have forced the firm to change the source of its production to St. Petersburg for the two portrait figures that took such a long time to produce.

King George V presented RCIN 40408 to his wife, Mary of Teck, in 1910, along with several other bulldogs purchased from Fabergé’s London branch. While the statuette was an addition to her existing collection of Fabergé animals, it continues a subset collection of semi-precious stone French Bulldogs, of various unrelated colours, of which there are six in the current Royal Collection, all of indifferent quality. These animals are illustrated in Faberge’s Animals by Caroline De Guitaut where no distinction is made over the quality of the carving or the importance of the ears.

This collection of statuettes is from a number of different stones including translucent, pale green bowenite, nephrite and obsidian, with rubies or olivines for eyes. A couple have a gem-set gold collar bearing a tag with various inscriptions, including ‘I Prix’ in French.

Many are very similar in size, style and pose. They are clearly not portraits, and were probably a standard item made for stock in Ider – Oberstein for Fabergé as a popular royal gift from friends of the family to the sovereign or his wife.

The two Danish sisters Dagmar and Alexandra in happier times as they holiday at their childhood home Denmark’s Fredensborg palace circa 1875. RCIN 2926643

Dagmar (later the Empress Maria Feodorovna) with her English Bulldog with cropped ears. This dog appears again in the photographic portrait of her two children in Part II. This superb photograph provides us with the earliest bulldog link between the two Imperial Courts be they French or English.

© Introduction and Parts I to V rests with John Hawkins, ‘Bentley’ Mole Creek Road, Chudleigh, Tasmania.
First published as a series in five parts between 7 June 2018 and 12 July 2018 on Tasmanian Times.