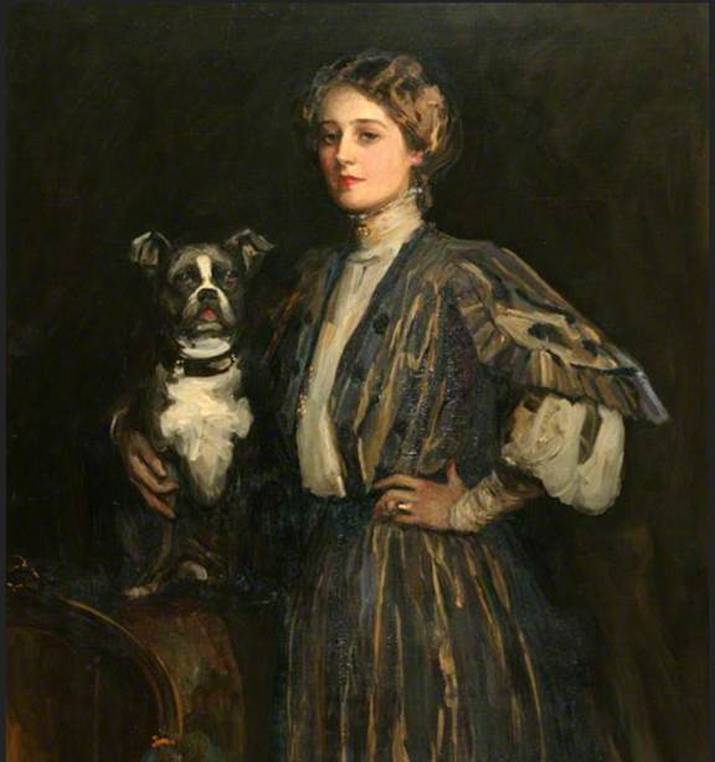 *Pic: L’Entente Cordiale. (Sir) John Lavery (1856-1941). This portrait is believed to be of Violet Manners, Marchioness of Granby and later Duchess of Rutland, with her English-bred, rose or drop-eared bulldog. The painting was purchased by the Manchester Art Gallery from Thomas Agnew and Sons at their Independent British Art Exhibition of 1906. The Entente Cordiale was an agreement signed on the 8th April 1904 between Britain and France in an effort to improve Anglo-French relations. (Illustration courtesy of the Manchester Art Gallery).

L’Entente Cordiale. (Sir) John Lavery (1856-1941). This portrait is believed to be of Violet Manners, Marchioness of Granby and later Duchess of Rutland, with her English-bred, rose or drop-eared bulldog. The painting was purchased by the Manchester Art Gallery from Thomas Agnew and Sons at their Independent British Art Exhibition of 1906. The Entente Cordiale was an agreement signed on the 8th April 1904 between Britain and France in an effort to improve Anglo-French relations. (Illustration courtesy of the Manchester Art Gallery).

An understanding of the history of the breeding of the bulldog, its popularity and its ear types, is important when considering the creation of Faberge bulldog miniature sculptures. The Duchess of Rutland’s dog is a fine example of a small English bulldog with a strong wide chest and typical ‘rose’ or drop-ears.

In Paris, by the last decade of the 19th century, a smaller French bulldog was being bred to type with either ‘tulip’ or ‘bat’ ears, thereby establishing a new breed weighing no more than 20 lbs, the Bouledogue Francais. At the beginning of the 20th century these smaller French dogs became highly fashionable and sought after, particularly by society ladies both in London and New York.

Country Life, through its column Kennel Notes, confirmed this interest, and the fashion, by publishing on 29 April 1899 the first definitive article on the history of the Toy Bulldog, as this new French breed was known in England:

The Toy Bulldog at the present time bids fair to become the most fashionable and popular of all dogs in England and, as an offshoot of the national breed of Britain, he is certainly entitled to the position which it appears probable he will shortly occupy …

Some thirty five years ago the small-sized or light-weight bulldog was common in this country so that dogs of the breed that scaled over 28 lb. were not encouraged at shows such as Birmingham. Then by some freak of fashion, the Toy Bulldog became all the rage in Paris with the result that the celebrated Bill George of Canine Castle, Kensal New Town, the most eminent dog dealer of his or any other day, received carte blanche commissions from French customers to procure those lightweight bulldogs, and by this means England was denuded of all her best specimens.

The French breeders deserve all credit for having sustained the breed when English breeders had completely lost sight of it, and although opinions may differ regarding the question of ears, the Parisian taste is entirely in favour of the upright “bat” ear as shown in the accompanying illustration. In France the “bat” ears are much preferred to the rose shape in which the tips lay back so that the interior of the ears and the burr are fully exposed. This assertion is borne out when a comparison is drawn between the prizes offered at the forthcoming Paris Dog Show… two special prizes of 2,000 fr. for bat-eared specimens, and two of the value of 500 fr. apiece for rose-eared …

The Country Life article illustrates and comments on four specimen French bulldogs then owned by the Duchess of Sutherland:

The accompanying illustrations represent some extremely choice specimens of the French or bat-eared variety, the property of Her Grace the Duchess of Sutherland. Of these, the brindle pied Zozo is Her Grace’s special favourite, and he accompanies her everywhere with his affection for his noble mistress and his intelligence causing him to be a pet wherever he goes. Coquin is a dark brindle pied, and will be seen to be unusually large in the skull for his weight, whilst his perfect bat-ears must cause him to be accepted as an unusually fine specimen of the French variety …

Coquin, a bat-eared French bulldog, the property of the Duchess of Sutherland, An unusually fine specimen of the French variety

In 1885, the first of the French breed was brought to New York in order to set up an American-based breeding program. The dogs were then owned by society ladies such as Rockefeller and Morgan.

The breed was first publicly displayed at the New York Westminster Kennel Club Dog Show in 1896. The following year, with even more entries, the judging of the breed would go on to have future ramifications over type for the judge in question, a Mr. Sven Feltstein, who only chose winners with:

“Rose-ears” ears that folded at the tip, as with the standard for English Bulldogs.

The first of this new French bulldog breed arrived in England in 1893 creating uproar among the English bulldog breeders as the French imports did not meet the breed standards, and they wished to prevent the larger rose-eared English stock cross-breeding with the French. As a result the Kennel Club only recognised them as a subset of the English bulldog, rather than as an entirely new breed.

On 10 July 1902, at the house of Frederick W. Cousens, the leading English Toy Bulldog breeder, a meeting was held to set up a breed club to seek individual recognition for the French breed. The adopted breed standard was to be the same as that already in use in America, France, Germany and Austria.

Robert Williams Daniel, American insurance broker and banker, photographed before returning on the maiden voyage of the Titanic with his champion, bat-eared, French bulldog, Gamin de Pycombe, wearing a fashionable badger bristle collar to keep his ears up. Daniel survived the sinking while the unfortunate dog perished, with Daniel later claiming on his insurance.

In 1905, the Kennel Club changed its policy and recognised the breed separately from the heavier and more substantial English variety, and to be known as the Bouledogue Francais.

Daniel’s Bouledogue Francais, Gamin de Pycombe, was bred by Cousens and sired by his Charlemagne of Amersham, the first British pied champion French bulldog. This dog was the grandson of the Paris bred Napoleon Buonaparte, who may in turn have been related to Prince Yusupov’s Gugusse.

The Russians, particularly the Romanovs, had been importing larger English type ‘rose’ or drop-eared bulldogs since the early 1880s, and on arrival they would crop the dogs’ ears, removing the folds. The three dogs owned by the Tsar and his sons, the future Tsar Alexander III and the Grand Duke Vladimir, were thick-set cream English bulldogs with cropped rose-ears, all probably purchased in France.

In the first decade of the 20th century, these cream/fawn and the newly bred French bulldogs with tulip-ears, were uncommon anywhere in the world.

In 1901, Prince Yusupov, together with his mother, visited Paris for the Great Exhibition. There they purchased, in the Rue de la Paix, the family’s first cream/fawn rose or drop-eared English bulldog, Gugusse. As the fashion for smaller French tulip or bat-eared dogs took hold in Europe and elsewhere, Gugusse was replaced in the Prince’s affection by the more fashionable tulip-eared French bulldog, Punch. Both Prince Felix Yusupov and the Grand Duke Alexei, a third bulldog-owning Romanov brother, soon acquired carefully selected smaller cream/fawn French bulldogs with tulip-ears that could not be easily cropped, but whose coats had faded to a pale, almost white, colour.

It is from his tulip-eared French toy bulldog, Punch, that Yusupov bred his puppies, and it is these dogs that instigated the Faberge bulldog statuettes which can be dated by their ears. These are the principal subject of this series now published in Tasmanian Times, and four more parts will mark the centenary of the murder of the Romanov family in July 2018.