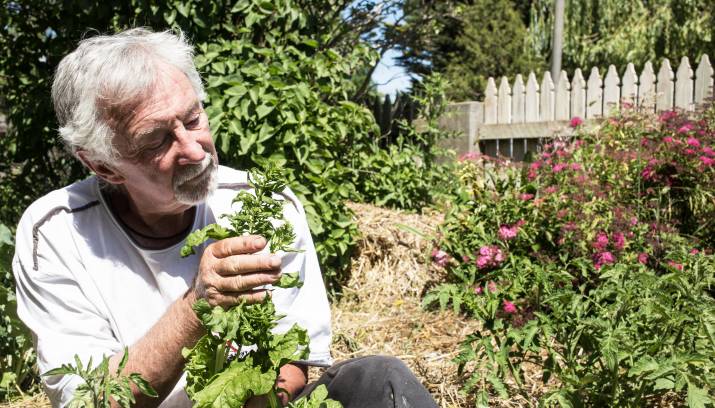 *Pic: Me … and my supposedly sinister silver beet plant.

The thin edge of the wedge has arrived in Whitemore, Tasmania.

I got a letter in the mail the other day from the international seed company, Bejo, asking me not to save my own vegetable seeds – specifically beetroot and silver beet.

What the shit? Bejo say that they are growing beetroots for seed somewhere in Tasmania – they say not where.

Apparently these plants produce pollen which can spread by wind for up to 10 km and the seeds that I save in my garden (I currently have one plant being saved for seed) could stuff things up for them by cross-pollinating with their plants.

It seems that I could possibly, single-handedly with my one plant, destroy an industry worth millions. Well best of luck with that one. I am currently trying to word a letter that tells Bejo to basically go and get stuffed.

I don’t know much about Bejo but they seem to have a whiff of Monsanto about them. Apparently Bejo are part of the Dutch company Bejo Zaden.

There also seems to be some information that their head office is actually in USA … so it is hard to tell. They are a private company and they don’t seem to list their directors or who actually owns the operation (or if they do I can’t find it).

They claim to be the third biggest vegetable seed company in the world and are active in 30 different countries. According to our ABC rural news department they are moving into Tasmania in a big way because of climate change.

They ask “that you please cut off, at ground level, any plants which are presently flowering in your garden”. Ah, well actually, no, I don’t intend to.

They didn’t offer to supply me with free vegetable seed by way of compensation and I would also greatly appreciate it they stopped spraying their crops with insecticides that could adversely affect my bees.

We were never consulted on this, just being requested to fall into line for the sake of the profits of an extraordinarily wealthy multi-national company – I don’t think so.

It is actually a bit hard to tell if Bejo are goodies or baddies because they seem to employ some extraordinarily capable spin doctors – as does Monsanto.

They continually throw in impressive (but meaningless) motherhood statements like “we stay close to nature” and “exploring nature never stops”. They also seem to be using the power of association by trying to ride on the back of the organic movement by producing some organic seeds. They don’t say how much.

So far I have only come up with one line for my letter of reply, “you are possibly a villain masquerading as one of the good guys”. I may substitute bully for villain – haven’t decided yet. It’s a start.

Steven French is a retired farmer, writer, photographer and publisher. He lives on a farm at Whitemore where his family (seven generations) have been since 1865. Steven’s 2010 book, Hand Made in Tasmania, was on the state’s best seller list for several weeks and his short story, Arthur, won the People’s Choice Award at the 2008 Tasmanian Living Writers Week. Steven is a former publisher/editor of Tasmanian Life Magazine and more recently the Editor of Tasmania Plus Magazine. Currently he is editor of Australian Sheep Magazine.

• Michael Anderson in Comments: In the US, where I live, it has taken the form of expensive lawsuits aimed at private citizens (farmers or just regular Joes) who grow heirloom crops and/or save seeds. The culprits are Dow, Monsanto, and Archer-Daniels-Midland. You can fully expect your politicians to take their side as these multinationals are bribing them hand over fist. Money talks and b———t walks. Their GMO plants can’t grow without petroleum-derived chemicals to keep them alive, but they can make your plants sterile. They – Don’t – Care.