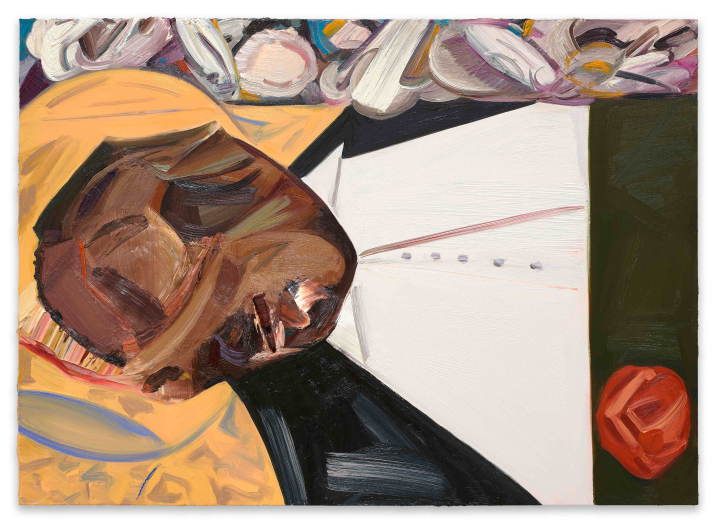 *Pic: Image from here, where there is a history of the controversy …

“You’re the problem, not the art” – according to WSJ contributor Terry Teachout, an American critic, biographer, librettist, author, playwright, and blogger. He is the drama critic of The Wall Street Journal, the critic-at-large of Commentary, and the author of Wikipedia.

“Two months ago, protesters disrupted a performance of Julius Caesar in New York’s Central Park in which the title character was dressed up to look like Donald Trump. When Caesar-Trump was stabbed to death . . . one of them, an alt-right agitator named Laura Loomer, leapt on to the stage and yelled “This is violence against Donald Trump” while her partner shot video of the protest. Both were hustled out by security officers as the audience booed, and the performance quickly resumed.

“What was most noteworthy about this escapade, however, was that it happened at all.

“It used to be easy to draw crowds by protesting against publicly-funded blasphemy or obscenity. That’s what happened when the National Endowment for the Arts [NEA], the American arts funding agency, gave Andres Serrano, the maker of Piss Christ, a $5000 grant. But such protests dried up after the NEA stopped making direct grants to artists, and now the once-hot culture wars of the 1980s and 90s are a thing of the distant past.

“Today’s right-of-centre activists rarely take any interest in the fine arts, preferring to save their fire for political matters. As for the Julius Caesar protest, there was no groundswell of support for it: most high-profile conservatives took note of Eustis’s anti-Trump production only to say how much they disliked its premise, though a few also expressed disapproval of Loomer’s failed attempt to shut down the show.

“Could it be that the populist anger that put Trump in the White House will trigger a 21st-century culture war? It’s possible. But to ask that question is to overlook the fact such a war is already being waged. The difference is that it’s a civil war, one that’s taking place not on the right [nor between Right and Left] but on the left.

“Consider what happened to Dana Schutz, a white artist of impeccably [left-] liberal views who was represented in this year’s Whitney Biennial in New York by a painting [depicting] in a non-realistic, wholly respectful manner the disfigured body of Emmett Till, a black teenager lynched in Mississippi in 1955 by southern racists. Protesters tried to have the painting removed from the show and one . . ., went so far as to demand it be destroyed, arguing that ‘it is not acceptable for a white person to transmute black suffering into profit and fun’.

“The Whitney, rightly, refused to co-operate, but the auto-da-fe [google it to see why it is such a well-chosen reference] continued last month when Boston’s Institute of Contemporary Art mounted an exhibition of Schutz’s work, inspiring a group of black artists to demand that the ICA ‘pull the show’ . . . Since Schutz had created a piece of what the protesters called ‘racist iconography’, the ICA thus had no right to exhibit any of her work. It’s a wonder they didn’t also suggest that she be flogged in Boston Common. [And, world-wide, there are scores of professional floggers who’d be available.]

“This may sound crazy, but it’s all too typical of the latest trend in political activism, which is to attempt to silence artists who fail to pass the increasingly rigid ideological litmus tests of the ‘woke’ [link – https://www.merriam-webster.com/words-at-play/woke-meaning-origin] progressive^ left. And since most artists are politically well to the left of centre, it necessarily means left-wing artists are trying to silence other left-wing artists for not being far enough to the left.

“Ideologues have always eaten their own. Four publishers turned down George Orwell’s ‘Animal Farm’ because they were afraid of antagonising the Stalinist sympathisers whom it satirised. [Think of Catholics v Protestants, Sunni v Shiites, Stalinists v Trotskyites, and scores more.] But the coming of Facebook and Twitter, which facilitate epidemics of instant outrage, has fostered a new cyber-culture of kneejerk offence that grows more virulent by the day, one whose participants are no longer content to attack well-known conservative campus speakers such as Charles Murray and Heather Mac Donald. Now they’re going after [fellow] liberal artists as well. What happened to Schutz can happen to anyone who dares to differ — even when they’re on the same side of the fence as their attackers. ~

“Fortunately for those who cling to the belief that there can be no freedom without free speech, resistance to the new ideological thuggery may be on the rise. Eighty prominent visual artists . . . have pushed back against Schutz’s oppressors with an open letter in which they declare ‘we wholeheartedly support cultural institutions like the ICA Boston who refuse to bow to forces in favour of censorship or quelling dialogue. It is also of the utmost importance to us that artists not perpetrate upon each other the same kind of intolerance and tyranny that we criticise in others’.* Eustis put it more pithily in a statement issued after Loomer tried to shut down [Shakespeare’s] ‘Julius Caesar’: ‘Free speech for all, but let’s not stop the show’.

“Whatever your politics, those are words for free men and women to live by. If you think artists should be silenced merely because their art happens to offend you — no matter who you are or what you find offensive — you’re the problem, not the art.”

^ prefer the more specific ‘progressivists’ and ‘progressivism’ myself, because they convey the ideological connotations

* if the increasingly vicious slandering and irrational demonising of opponents of SSM doesn’t spring to mind, maybe “you’re the problem”, too.