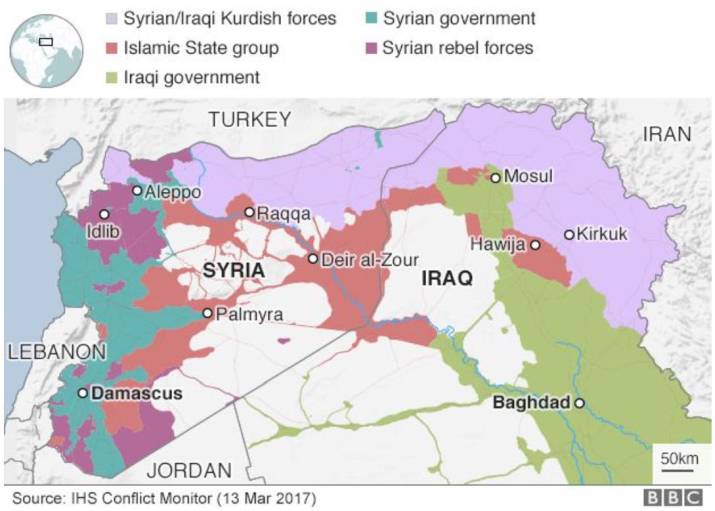 Does all the way with President Trump in the Syrian civil war, mean that Australia is now committing war crimes in an illegal invasion?

It may be one thing to fight the Islamic State in Syria, without regard to the recognised government of Syria, but it is quite another to be on the side that attacks Syria.

HOW DID THIS BEGIN?

What began as a call for liberty in the Arab Spring uprisings, quickly tumbled into a civil war in Syria, that has now spread its wings of death across three nations.

Could there be a more complete melting pot of global conflict, with so many nations now directly or indirectly involved, it is hard to see how such a conflict will not run out of control and spread to more nations.

Who is doing what?

SYRIA ~ The Syrian government remains the official government of Syria and is fighting rebels and the later arisen Islamic State to win back control of the nation’s territory. Syria has direct support from Hezbollah in Lebanon, Russia, Iran and China.

SYRIAN REBELS ~ There are many rebel groups in Syria fighting to change the government, but are now bogged down in an endless conflict, and at times fighting among themselves.

RUSSIA ~ As an ally of Syria, Russia is engaged in supporting the official government of Syria with advice, arms and action, including air strikes.

TURKEY ~ Turkey is the recipient of a great many refugees from Syria, many of whom have sought to reach Europe, and many have perished in the sea on the way. Turkey is also actively involved in the conflict, with forces on the ground in the north of Syria, in part to prevent Kurdish forces from extending along all of their southern border.

KURDS ~ The Kurds have been seeking a homeland in the north of Iraq, and with the Syrian civil war, have spread across the north of Syria where there are ethnic Kurds. The Kurds are engaged against the Islamic State, but when, this conflict is ended, there is an open question on whether the Iraqi government will accept a new Kurdish nation in their north, or will seek to take back the north of Iraq. Turkey is engaged in an on-going conflict with the Kurds in Turkey, and may also object to a Kurdish state across their southern border, and take military action. Should, or when, Syria dominates the military field, if the intention is to reclaim all of Syrian territory, this may also lead to conflict with the Kurds.

HEZBOLLAH ~ Based in Lebanon, the Hezbollah Shiite forces entered conflict in Syria in support of the Syrian government. They are from time to time attacked in Syria by Israel, who fear that weapons are being taken into Lebanon, which will later be used to fight Israel.

UNITED STATES ~ The United States have been in support of the Kurds and the moderate Syrian rebels. The US is also in support of Iraq in the fight against the Islamic State. US special forces are active on the ground in Syria, training the moderate rebels to fight the Syrian government, and the Islamic State. The US has also been sending fighter planes to bomb any perceived enemy, in support of the moderate rebels, as well as against Islamic State targets. If the United States was not involved in Syria, the civil war may have been over some time ago, but US dreams of regime change live long and hard. Should US forces on the ground in Syria be seen as a form of invasion, as they are not there at the invitation of the Syrian government. With boots on the ground in Syria, the US is running the risk of getting drawn into a ground war, with unknown consequences.

AUSTRALIA ~ As an ally of the United States, Australia has been flying bombing raids in Syria under the direction of the United States. The legality of Australia’s action may be questioned, which President Putin of Russia has, declaring to Prime Minister Turnbull in September 2016, “I’m fighting for the legitimate Government of Syria,” Mr Putin added, “Who are you fighting for?” [1] “It was, Australian sources conceded, a very good question.”

IRAN ~ Iran is engaged on the ground in Syria, in support of the Syrian government, fighting rebels and the Islamic State. Fighting US supported rebels also means that Syria, Hezbollah, Russia and Iran are also indirectly engaged in conflict with the United States. The long history of animosity between Iran and the United States could easily see conflict break out, with no known direction or end.

ISLAMIC STATE ~ Radical islamic fighters have been able to set up their own state in Syria, and spread the conflict into Iraq, including taking Mosel, where despite a long campaign by Iraq with US support, they have not yet been defeated. Islamic State militants recently opened a new front, in the Philippines, where they are fighting Philippine and US forces in the city of Malawi. Should this new front gain more support from militants in the region, we can but wonder how far the fires from the civil war in Syria will rage in South East Asia.

CHINA ~ China is training Syrian forces in China, and participating in the rebuilding of Syria.

OTHERS ~ Many other nations have been engaged in the Syrian civil war, whether supporting Syrian rebels, or running with the United States to bomb Islamic State targets. Many individuals from around the world have been drawn to the fighting in Syria with the rebels, and the Islamic State.

Considering how many nations are involved, the Syrian civil war is like a global conflict in a nutshell.

And the nut is cracked, with conflict leaking into Iraq and the Philippines.

There is no knowing how far such a war will go, or what will trigger the spreading of the flames.

The United States recently shot down a Syrian government fighter plane, which triggered an angry response from Russia, and threats against US forces operating “illegally” in Syria.

Following the American shooting down of a Syrian government fighter plane, Australia has suspended bombing raids over Syria, now resumed.

Iranian forces in support of the Syrian government and fighting the Islamic State, are now in close proximity to moderate rebel forces supported by US special forces.

It is the American insertion of their strength into the Syrian civil war, in support of moderate rebels, who now stand no chance of winning, that has resulted in the downing of a Syrian government fighter plane, and also two Iranian drones, and other strikes against Syria.

The Iranian, Russian and Syrian government forces are also in conflict with the moderate rebels, as they all fight the Islamic State.

Iran has a strategic intention of opening a land route across Iraq and Syria to the Mediterranean Sea.

The United States, in support of moderate rebels, has now parked itself in the way of Iranian intentions.

Iran was subject to a terrorist attack recently, claimed by the Islamic State.

In revenge, Iran sent rockets from Iran to bomb Islamic State targets in Syria, which may have also been a warning to the United States, and Australia.

Thomas Gibbons-Neff described the kind of manouvres going on around United States special forces at present. ~ “Despite the U.S. airstrikes, Iranian-backed militias have continued to encroach toward the U.S.-supported forces at Tanf. At one point in the last week, a column of pro-Syrian government militias skirted the periphery of the deconfliction area and managed to reach the Iraqi border. The move drove a de facto wedge between Tanf and the Euphrates River Valley, subsequently hampering the possibility of any future U.S.-led offensives against the Islamic State there.” [2]

Paul McGeough comments ~ “Julien Barnes-Dacey, an analyst with the European Council on Foreign Relations, worries that the new US administration has not learnt the lessons of its predecessors in Iraq. Barnes-Dacey writes: “A fight against Iranian proxies in eastern Syria is likely doomed to failure and would distract attention away from other important areas of the country. A US-supported push into eastern Syria will almost certainly end in failure given the regime and Iran’s commitment to securing the area.” Then he gets really worried: “It also runs the risk of provoking a broader US-Iranian conflagration that would significantly set back any efforts to defeat [IS] and secure some form of peace not just in Syria, but also in neighbouring Iraq.”” [3]

The Russian action in Ukraine, or the strife with North Korea, may in fact be mild problems, compared to the Syrian civil war.

A clash between the United States and Iran may go much further than might be imagined, just as a new Islamic State front has opened in the Philippines.

There is a growing ring of anger with the West, running from Russia in the west, around Iran and China and Russia again in the east.

We can but wonder if US action in Syria will be the spark that lights the fire along this ring of anger.

If that fire is lit, the only peace may be if America steps back.

Considering how two major nuclear powers, one minor nuclear power, and many of their allies are within this ring of anger, hemmed in by 400 US military bases, any fire breaking out would have far-reaching consequences.

How can peace be won beyond such a melting pot of war, with so many nations tossing in new ingredients and stirring the brew?

Is Australia committing war crimes in an illegal invasion of Syria?

The ABC News Online reported ~ “Russian Deputy Foreign Minister Sergei Ryabkov, in comments to Russian news agencies, compared the downing of the Syrian jet to “helping the terrorists that the US is fighting against. What is this, if not an act of aggression?” Mr Ryabkov asked. The plane was shot down was near Tabqa, a Syrian town in an area that has been a week-long focus of fighting against IS militants by the SDF as they surround the city of Raqqa and attempt to retake it. [4]

Ariel Zilber writing in the daily mail reports ~ “A Democratic senator says the US military’s recent strikes against Syrian government targets are ‘completely illegal,’ it was reported on Wednesday. Tim Kaine, the Democratic senator from Virginia, told Sirius XM on Wednesday that the Trump administration must receive authorization from Congress before targeting forces loyal to President Bashar al Assad. ‘I think the military action that is being taken against Syrian government assets is completely illegal,’ said Kaine, who was Hillary Clinton’s running mate during the recent election campaign.” [5]

Faisal Itani concludes ~ “It was always fantasy to pretend the U.S. could fight ISIS without being a party to the broader civil war.” [6]

Should the Australian parliament be debating our slide into an invasion of Syria, and committing war crimes as a consequence?

There is a very high risk with two nuclear armed powers coming into conflict in Syria.

A firestorm could all too easily break out between Iran and the United States, drawing in Syrian government forces and potentially, Russian fighter jets.

Once anger is unleashed, the Syrian pot of war could well boil over into a global conflict.

Do we wish to be party to that?

[3] Facing old foes: Could the fall of IS ‘caliphate’ be the start of Iran-US war?
Paul McGeough, 20 June 2017, Sydney Morning Herald
http://www.smh.com.au/world/facing-old-foes-could-the-fall-of-is-caliphate-be-the-start-of-iranus-war-20170620-gwuk1x.html

*Kim Peart is a visual artist and observer of the world who lives in Ross in Tasmania’s Midlands.