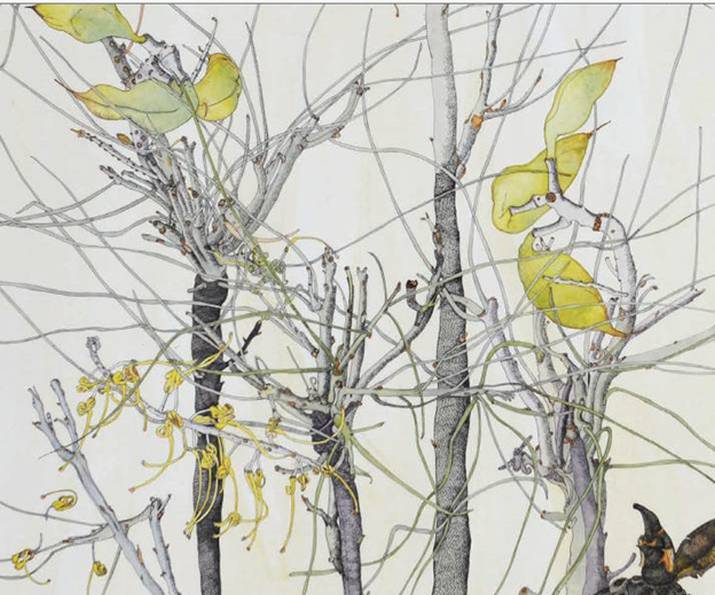 I think the distant deserts and the tropical north hold a special place in the psyche of all Australians – and many of you will have been lucky enough to have visited some of the better known places – Rainbow Valley, Palm Valley, Chambers Pillar or the Painted Desert – and perhaps you may have photographed aspects that entranced you – framing them in your camera lens. How did YOU see these places? And how do your perceptions differ from Robyn’s?

Sidney Nolan gave us some of the earliest artists’ views of the desert. His eyes saw vast aerial panoramas. His focus was on the ancient geological structures – the bare bones of the outback, the space, the void.

Later, John Olsen saw a different desert, not a void, not a dead heart but a place teeming with life and activity, which he represented in bold dashes and squiggles of colourful paint.

In the same vein Robyn too sees the desert as full of detail – she too fleshes out the bare bones of the desert landscape. She brings her keen botanist’s eye, her entomologist’s eye and her appreciation of the long geological history of the land. But she brings far more than the dryness of scientific recording. She invents something of the essence of these places – her lyric lines, her complex rendering of textures and the almost tactile form she brings to the craggy boulders and rocky outcrops she is so entranced by.

She does this with the finest lines, the keenest observation taking pleasure in the detail bringing out something of her deep attachment to these places – something of the joy of sitting quietly and absorbing her surroundings – with something of the romance of intrepid women of another century – the Olive Pinks, the Daisy Bates, the Ellis Rowans.

Some of you might only know the elegant Robyn, you may even think of her as something of a delicate flower – if a rather determined delicate flower, but that’s not the Robyn I know. Robyn the artist in the field … has been known to share her small domed tent with a deadly brown snake without resorting to hysteria. She’s up at first light to complete a complex routine of exercises that seem to involve a lot of leg waving – then breakfast, a huge bowl of grains that would delight any horse – then off ALONE – a small eager figure – heading up a gorge or along a river bed, weighed down with drawing board and art gear, her body totally shrouded in floating white stuff with her fingertips the only skin exposed to the sun.

She presents a terrifying ghostly apparition to any unsuspecting walker who happens across her – as one couple did in Roma Gorge – they didn’t linger! She sits all day long totally focused on her chosen subject, forgetting to eat, reluctant to leave even as the light fades. She may have endured tearing desert winds that whip away the paper, she may have endured heat that sucks all the moisture from the skin – and she most certainly will have endured the torment of a myriad of small and very persistent black flies … and then there’s the ants.

Back in camp around the fire she shares the day’s discoveries – the vibrancy of the colour of a tiny dragonfly, the fold of a petal on a newly found flower or the chatter of the finches as they come in to drink at the waterhole. Then it’s a wash in a precious half bucket of water and into the tent to write up her diary away from the circling moths.

We did have more ‘luxurious’ accommodation at Watarrka where we stayed in a caravan affectionately known as the Silver Bullet – this particular one had been cast off by the Department of Main Roads when they considered it was past its use-by date. When we arrived it had already been colonized by the local rodents …

The result the hard won paintings we see today – so beautifully presented on the spinifex green walls, so well hung, so clean and crisp – thanks to the expertise and efforts of Richard Mulvaney and his museum team.

I usually avoid using adjectives that describe my emotive response to art works, preferring to select words that describe the paintings themselves. Today I have to make an exception. The exhibition is stunning.