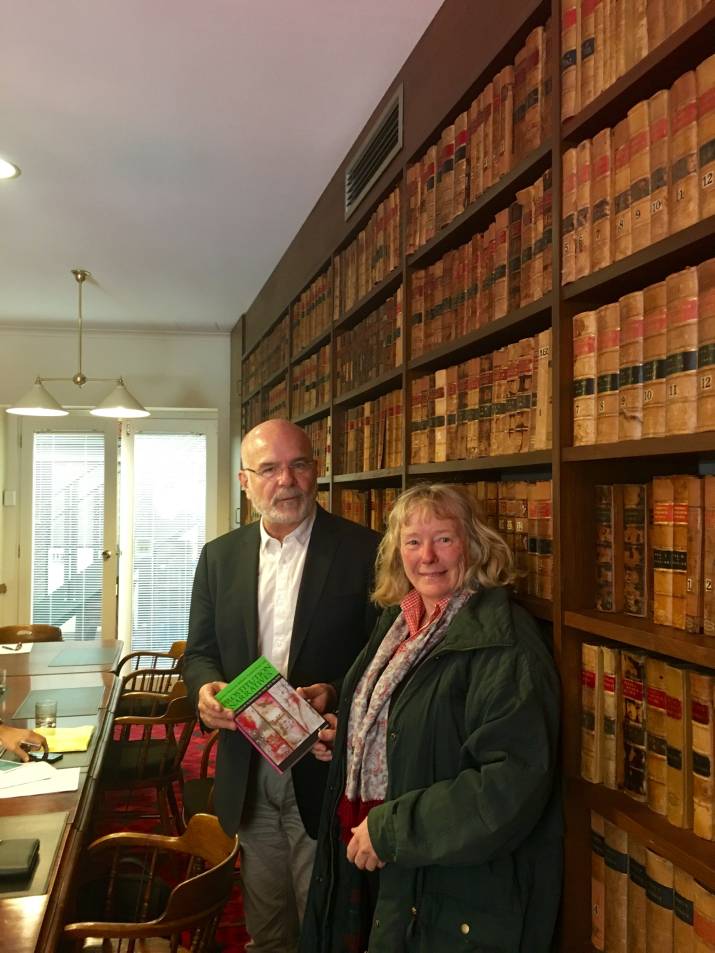 M. Forst is visiting Australia as part of a worldwide investigation into the treatment of human rights defenders in society.

Also in attendance at the above session were representatives from Civil Liberties Australia, Community Legal Centres Tasmania, Australian Lawyers for Human Rights, the Tasmanian Environmental Defenders Office, an intending state government political candidate, a recent board member of the Tasmanian Legal Aid Commission, an honours student in law at the University of Tasmania and a student with an interest in environmental issues.

These attendees focused on Tasmania’s anti-protester laws, the need for a charter of human rights in Tasmania, and the recent proposed changes to the Tasmanian Anti-Discrimination Act, which they say will permit ‘hate speech’ against members of the LGBTQI community. (The irony of this latter assertion is completely lost on those adopting this position.

They roundly criticise religious groups in the most ‘hateful’ terms, and bitterly lament the government’s proposed amendment to the Anti-Discrimination Act that will allow those groups to preach their religion without fear of being constantly subjected to claims of broadcasting ‘hate speech’).

• The abuse and exclusion experienced by those defending the human right of women and girls not to be exploited in the sex trade. The trend towards ‘no-platforming’ of abolitionist academics and activists, particularly at universities, was noted, as were the threats, both personal and online, directed at individual abolitionist and groups working towards an end to prostitution. In an Australian context, M. Forst was advised of the threats and book launch disruptions associated with the recent release of Prostitution Narratives – a selection of prostitution survivor stories. M. Forst was offered, and accepted, a copy of Prostitution Narratives.

• The failure of Amnesty International to consult with, and acknowledge the experiences of, prostitution survivors when formulating their current policy on prostitution, which is to advocate for decriminalisation of prostitution in all jurisdictions worldwide.

• The failure of Amnesty International to also acknowledge that blanket legalisation/decriminalisation of the sex trade in Germany, the Netherlands, New Zealand and NSW, Australia has led to exponential increases in both legal and illegal prostitution, sex trafficking and the involvement of organised crime in prostitution.

• The need for UN Women to give proper weight to the contributions of prostitution survivors and abolitionist activists, academics and writers to their current consultation on prostitution.

• The need for the UN to consider the rights of women as separate to ‘gender identity’ rights. Conflating those rights under the banner of ‘persons who identify as female’ allows governments and society in general to dismiss any perceived clash between the rights of biological women and those who ‘identify as women’ as irrelevant, non-existent or trivial.

The UN must acknowledge that, in certain very significant circumstances, the rights of biological women may be at odds with those of transgender women. Such acknowledgment would give biological women the means to prosecute those rights without fear of being ignored, at best, or vilified and abused for exercising their supposed ‘cis-woman’ privilege.

The UN recognises the phenomenon of a ‘clash of rights’ in other circumstances – for example the clash between the ‘culture’ of female genital mutilation and the right of women to be free from torture. The rights of women are clearly given preference by the UN in these situations.

The right to express a ‘gender identity’ should be considered a cultural right and the potential for dissonance with the rights of women should be formally recognised.

• The reluctance of Tasmanian authorities – the government, the police, the courts and statutory bodies such as the Integrity Commission – to give credence to, and investigate complaints against public offices, and public officers, particularly insofar as they relate to human rights violations.

• The policy of the local press to largely ignore the work of human rights activists in Tasmania.

• The difficulties facing human rights activists seeking impartial legal advice in Tasmania. Whistleblowers, in particular, are generally advised to consult with legal practitioners outside the state.

M. Forst and his assistant listened carefully to the contributions of all attendees, and asked questions for clarification when necessary. It was surprising that very few civil society groups took advantage of the opportunity to make their views on the role of human rights activists in Tasmania known to the UN Special Rapporteur.

*Isla MacGregor has worked with several National and Tasmanian public interest and Whistleblower organisations since 1993. Isla worked closely with many Tasmanian whistleblowers especially during the 1990’s and led the campaign to introduce Public Interest Disclosure Laws in Tasmania. In 2008, Isla contributed to the Tasmanians for Transparency campaign to push for establishment of a proper Anti Corruption watchdog in Tasmania. Isla thinks there is an urgent need to revitalise public interest activism if Tasmanians want to see more accountability and transparency from Public Officials, Governments and the corporate sector.

• Isla MacGregor in Comments: Corruption and public interest disclosure legislation has not resulted in any cultural shift towards protecting public servants’ freedom of speech and their rights to expose threats to human rights, public or environmental health, fraud, serious mismanagement or corruption. Since the Tasmanian Integrity Commission established in 2009 the first Commissioner Murray Kellam, and CEO’s Barbara Etter and Dianne Merryful resigned and made highly critical statements about the Tasmanian Government: He attacked the Government’s budget cuts to the watchdog and what he described as a “manifestly inadequate” legislative framework. I fear that such complacency and naivety will in the future prove to have given the ‘green light’ to corruption in this State.
Murray Kellam, Tasmanian Integrity Commission …