BUENOS AIRES, home to over 14 million people or over a third of Argentina´s population, is a huge city, probably the biggest I´ve ever visited. It was founded by the Spanish in 1580 to become a vital port and trading point for transporting the riches of Peru and Bolivia to the rest of the world. It is a modern city with a friendly and vivacious population, yet for such a large and frantic city, it feels remarkably laid back. Early this year, Argentina became the first Latin American country, and the second country in the Southern Hemisphere, after South Africa, to legalise same-sex marriage.

There is no shortage of colonial splendor around the city, but the modern developments are equally striking. The huge former industrial port, Puerto Madero, has been revitalized in recent years and is now home to bars and restaurants that look out over the canal and the old sailing ships. They have made a point of leaving many of the old cranes in the area but with a bit of a paint job, which very effectively maintains the historical character whilst complimenting the new personality of the area. One of the nicest things we did was simply wander through a nature reserve on the edge of the city where some guy turns up every week with some huge speakers and all sorts of random people turn up to dance or just watch people dance whilst drinking beer or wine. It´s times like this I am reminded how much of a nanny-state Australia has become regarding outdoor drinking and how everywhere I have been where they are relaxed about it, I have never seen a problem caused by it, other than litter that is.

There are so many different traditional dances and corresponding music across Latin America, but one of the best looking is the Tango. Though now popular from elegant shows to the street, Tango apparently began in the seedy bars of Buenos Aires. We went to a Tango show that included a three course meal, all the wine you could drink and a Tango lesson. Fortunately the lesson came before the wine. The Tango was great, but the most impressive part of the show for me was the traditional dancers from the north. They were like three giant pirates spinning what seemed to be something like a stone on the end of string making it hit the floor in perfect time to make the beat. It’s a hard thing to describe, but was one of those things that seemed impossible, particularly when one of them was also able to trim his moustache with the stones spinning so fast that you couldn´t see them. It made me think about all the crazy things all over the world that humans devote themselves to and perfect, most of them completely unnecessary activities. Thank god they do! 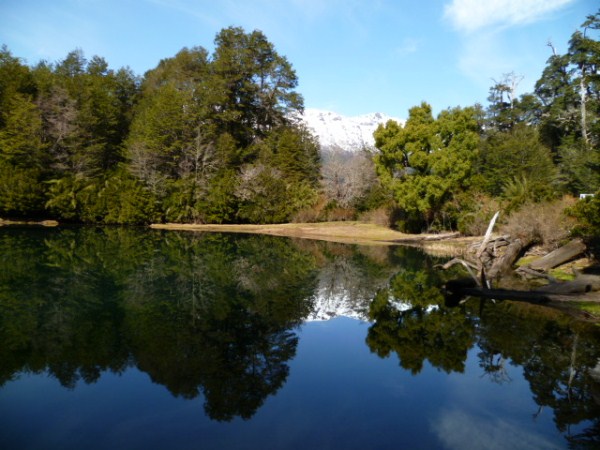 Argentina was for a time one of the world´s richest countries and Buenos Aires was its heart. Huge investment and immigration from Europe hit the country from the late 1800s and it brought massive growth in population and wealth. In the twenties it was one of the ten richest countries in the world with an economy based on exports. However, much of the country was poor, which eventually led to the election of General Juan Peron in 1946. For a time things improved significantly for the poor as he radically changed the political landscape, fostering unionization, urban development, nationalization of strategic industries and improving working conditions. This approach is now known as ´´Peronism´´ in Argentina.

But it is his wife Eva (Evita) who is better known around the world than the former President. She was an icon of the poor and a highly political figure often speaking on behalf of the President. Her death from cancer in 1952 evoked Princess Diana-style public mourning. As our hotel was near the huge city cemetery we took the obligatory wander to see the incredibly ornate and monumental tombs, where the rich of Buenos Aires are buried. Crowds flock here to see the tomb of ´Evita´. Even sixty years after her death, she continues to evoke either love or hatred from Argentines.

Peron started to lose control of the economy, partly due to the end of World War II in which Argentina was neutral and able to profit greatly from the export of goods, especially to Britain. He had also been steadily falling out of favour with the US due to his reforms and in 1955 a violent coup deposed him and he fled to Spain. He made a short-lived comeback in 1973 when further repressive regimes opened the door for him to capitalize on discontent. He took office briefly, then died leaving his third wife to take over, which led to another coup and the awful regime that killed, tortured and disappeared tens of thousands between 1976 and 1983.

San Antonio de Areco is a village of around 10,000 inhabitants, two hours from Buenos Aires where all of the city rush and racket disappears. It evolves around its treed central plaza and out towards the estancias (farms) that surround it. It seemed as if in slow motion after the capital. Many of the shops and restaurants were in a style reminiscent of the early twentieth century. There is the smell of slow cooking meat wafting through the streets from the parrillas and the odd gaucho (cowboy) trotting by on his horse.

We walked along the river that flanks the town followed by the obligatory group of dogs. There are stray dogs everywhere in Latin America. The Argentine strays are much better fed and healthy-looking than those in the poorer countries such as Bolivia. As soon as you show the slightest bit of affection they befriend you and follow you wherever you wander, even waiting the night for you outside your hostel. In the wealthy parts of Buenos Aires you don´t see stray dogs, but rather paid dog walkers struggling through the streets and parks with up to fifteen dogs of all shapes and sizes. As an old mate Leon often said, ´´Fifteen dogs can´t be wrong.´´ 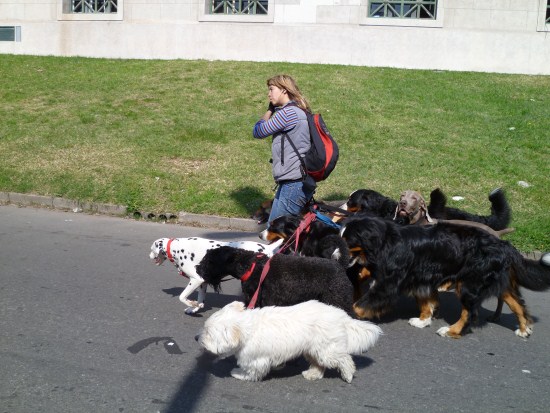 I have become fascinated watching the secret society of stray dogs. They always seem to be up to something, or planning, always appearing to know where they are going and why, even when they suddenly just take off in a group and sprint about five blocks for no apparent reason. They have a complex social network and somehow fighting is very rare, unlike mate-ship. It´s as if there are two societies in each town and city, that of the people and that of the dogs, and they largely go about their business without bothering each other.

Mendoza is a city of almost one million inhabitants in the centre of Argentina´s premier wine and olive producing region. We rented bicycles and spent a day riding about tasting wines, liquors, olive oil and all sorts of local foods. Mendoza was completely destroyed by earthquake in 1861 and today the ruins of a huge Jesuit church are the only remains of the original city.

The Jesuit story in Latin America is an interesting one and they have left a huge legacy in certain parts of the continent. They are generally considered to have been much more humane with the indigenous population of the Americas than the Catholic Church. Indigenous did work for Jesuits, but they were treated much better. The Jesuits actually learnt the indigenous languages and communicated in these rather than their own. This kind of respect and humanity is very rare in colonial histories. It was not considered beneficial to the Spanish Empire or to the Catholic Church, and the Jesuits were expelled from South America in 1767.

The weekend we were in Mendoza happened to be the Bicentenary of Chilean independence, and being quite near the border, Mendoza was full of Chileans enjoying their long weekend. In fact the whole main plaza was given up to stalls selling Chilean food and drink and it was nice to see that Argentines seemed to be celebrating as much as their Chilean brothers and sisters. 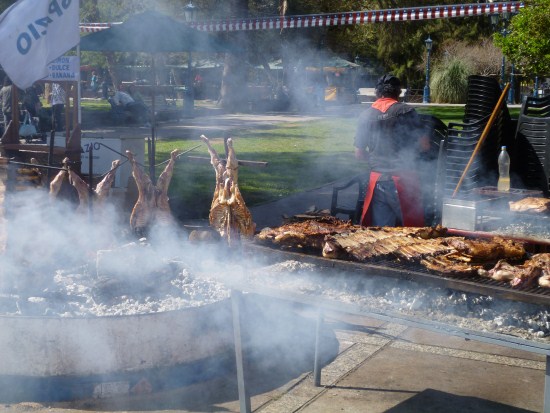 A 16 hour bus from Mendoza took us to Bariloche and a latitude similar to that of Hobart. During the last few hours of the trip we witnessed dramatic environmental changes as the flat dry farming land morphed into blue lakes, dark green forests and extravagantly-shaped mountains, often capped by snow. We were also impressed that the bus company served us wine during our dinner.

Bariloche was a good base to visit several places within a couple hundred kilometre radius and travelling as four made renting a car economical. It´s beautiful in every direction from Bariloche, and for me each of the journeys were more rewarding than the villages at the end of them. The villages were nice, in particular San Martin de Los Andes, but the lakes and mountains and forests were breathtaking, particularly after so much time in the dry barren landscapes of Bolivia, southern Peru and northern Argentina.

Our first trip was to Villa La Angostura, which is about an hour from Bariloche, west toward the border with Chile. It is situated at the end of the same huge lake that glitters through valleys all the way to Bariloche. The village was so tourist orientated it didn´t really seem real. There seemed to be nothing there that wasn´t catering to tourists, but it did have the most beautiful setting amongst thick beech forest. 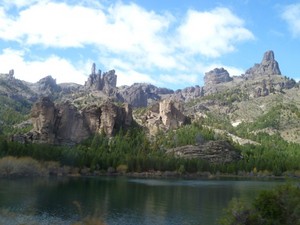 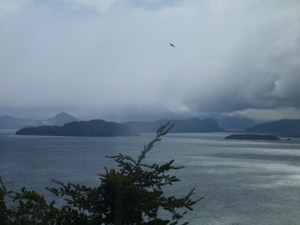 The next day we headed for El Bolson, known as a hippie retreat and a great place for boutique beer. Again set in the mountains the village had its own thing going on and was more than simply a tourist resort. There is a regular artisanal market selling everything from hash pipes made out of eagle talons to dog food. There are nice walks up the hills in the pine forests but the lasting memory will remain the chocolate beer and the chili beer.

After trying to cross the border into Chile only to be turned away due to the hire car not having international papers we pointed the Volkswagen onto the one road we´d been told not to take by the rental agency, the Seven Lakes road to San Martin de los Andes. The 200 kilometres of road were basically being re-built. After about 20 kilometres of mud, huge rocks and repeatedly scraping the underside of the car we thought about turning back. After about 50 kilometres it started to make more sense to keep going as we knew there was another route back to Bariloche from San Martin. 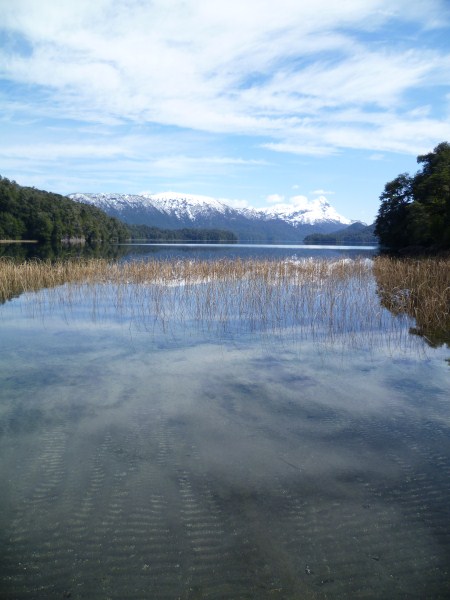 One of the Seven Lakes

I had fresh imaginary images of the road having recently re-read The Motorcycle Diaries to coincide with travelling in Guevara´s native land. He and his mate bounced along this road staying with park rangers mostly and described the scenery of deep green beech forests meeting crystal clear lakes that often present perfect reflections. The real images surpassed the imaginary and as a young man said, ´´when the road is finished it will be one of the world´s great drives.´´

San Martin was the nicest of the villages in the region, nestled in gentle mountains on the beach-like shore of its own huge shining lake.

It was time to say goodbye to the folks and head further south into Patagonia proper and ultimately right down to Tierra del Fuego. On our few kilometre walk to the bus station we passed an independence monument, which was covered in graffiti in support of autonomy for the indigenous Mapuche people of the area and condemning their genocide. There were around ten largish dogs lying on all sides of the monument. I couldn´t help wondering if they were just relaxing together as they appeared, or if this time they were planning something big. 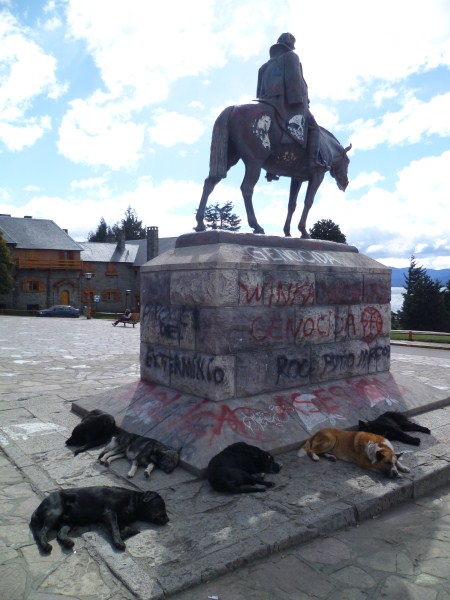