AN HOUR long ferry from the port of Buenos Aires took us to the little town of Colonia del Sacramento, in Uruguay. Until visiting the country, I associated it with steak, leather, the home land of Eduardo Galeano, and since the World Cup, Diego Forlan. Uruguay has South America´s most European descendent population as well as its smallest, with a little over three million inhabitants, half of which live in the capital, Montevideo. In area too, it is the smallest Latin American country at about twice the size of Tasmania. It is situated on the Atlantic coast of South America, nestled between Argentina and Brazil. Uruguay officially came into being as a nation when, in 1825, the British mediated an agreement between Brazil and Argentina for its creation, effectively creating a buffer country to end trade disruption because of frequent fighting between the two South American giants.

However, the region always had its own identity and was fiercely defended against the Spanish by its native people, known as the Charrúa Indians. They held on to control of their land longer than most, though this was partly due to the Spanish focus on pillaging what is now Peru and Bolivia. They were a much more sparsely populated people and a less developed society than the likes of the Incas to the west.

From 1810 Jose Artigas, who famously said, ´´let the tyrants tremble,´´ led the independence struggles in the region, known at the time as Banda Oriental. He ended up dying and exiled in Paraguay, but today his remains are buried under the mausoleum in Plaza Independencia, in the centre of Montevideo. The mausoleum is a haunting place. As you descend the steps under the main square and a large independence monument, you enter a large dimly lit room walled by huge concrete letters spelling out the names of various battles for independence. But what sticks with you, are the two soldiers standing on each side of a large urn, perfectly still but for the occasional blink. The solemn and silent soldiers can´t help but evoke thoughts of war and the sacrifice, and misery it has brought to so many places. 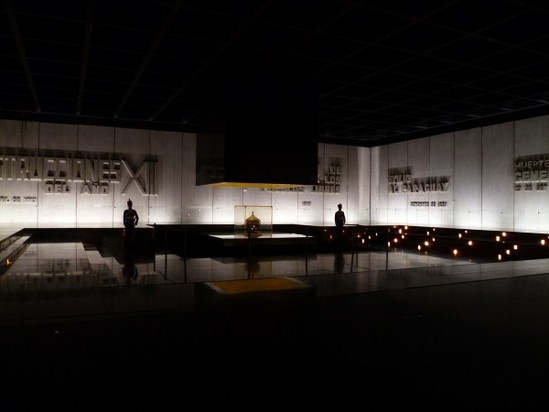 Even before the creation of Brazil and Argentina, in the early 19th Century, the region that is now Uruguay was subject to a tug-of-war between the Spanish and the Portuguese. Colonia del Sacramento was originally founded by the Portuguese partly to claim the cattle producing region to the north and partly as a smuggling port to and from Buenos Aires, which was a vital Spanish port for taking all the riches from Peru and Bolivia to Europe. It changed hands many times between the Portuguese and the Spanish, until the Spanish finally expelled the Portuguese and their British allies in 1777. Today Colonia del Sacramento is a very chilled little town of colonial buildings (both Spanish and Portuguese) on a little point. A wander about is like stepping back in time, partly because of the numbers of old cars adorning the city, some of which seem to be merely street ornaments.

Travelling from Argentina to Uruguay actually feels a little like switching from Spain to Portugal, but not due to buildings or past influence. Just like Portugal in comparison to Spain, Uruguay feels similar to Argentina, but a little poorer. The buildings are less well kept and everything looks a little run down, albeit in a colorful and charming way.

Colonia del Sacramento was where we indulged on our first ´meat fest´ that Argentina and Uruguay are so famous for. A parrilla para dos (barbeque for two, in Australian) landed on the table, on a mini-barbeque with hot coals under it. One large chorizo, one large morcilla (black pudding), pretty much a whole chicken, lots of parts of cow and grilled tripe. It was sickeningly good, and though I thought it would never need be done again, it had had to be done out of respect for Uruguay. 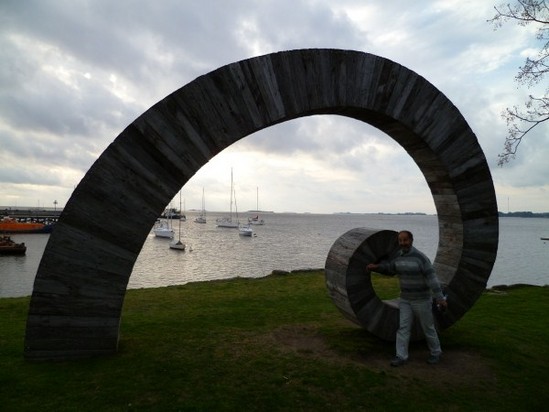 In 1723 the Portuguese began building Montevideo, further to the east, provoking the Spanish to attack and take it over. They quickly turned it into a fort using the labour of over a thousand Guarani (indigenous people from the area that is today Paraguay) and offered privileged trading rights to attract Spanish settlers, which turned it into the port city it is today. The British briefly conquered Montevideo, for eight months in the early 19th Century, which created a more diverse European population in the city.

The first hundred years of nationhood produced turbulent times and around twenty revolutions, but the country remained productive producing leather, beef, wool and sealskins, and trading in gold, silver and slaves. Free and compulsory education was introduced in 1877 making Uruguay one of the continent´s most literate, inclusive and skilled countries.

In the early twentieth century the British had so much economic control of the country due to their investments there, that President Herrera y Obes declared, ´´I feel like the General Manager of a company whose board is in London.´´ Increased government control of banking, ports, electricity and lending gradually reduced the flow of profits overseas, allowed the government to invest in social reforms and began the creation of a large middle class, which does not exist in most Latin American countries. Large austere buildings, such as that of the Port Authority and Customs building, still stand as testament to the British influence in Montevideo. 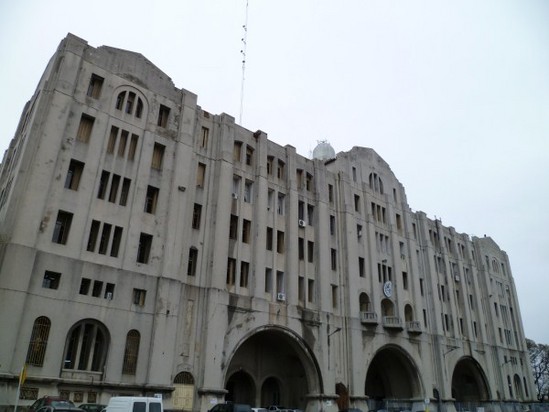 The demand for wool and tinned meat during the two world wars was kind to the Uruguayan economy and its stability caused it to be known as the Switzerland of South America. Refugees from the two wars also increased the diversity of it European-based population.

The first World Cup was held in Uruguay in 1930, which they won and then repeated victory at the second event. Their continued success, such as reaching the semi-finals this year, is astounding given their tiny population.

At the beginning of World War II the technically neutral country of Uruguay became involved. Their strong trade links with Britain, particularly the supply of beef and leather, became a target of the Germans. The German ship, Graf Spee, had been sinking British shipping in the South Atlantic until it was intercepted off the Uruguayan coast by British war ships. The ship was damaged causing Captain Hans Langsdorff to make for the neutral port of Montevideo for repairs, despite there being a safe harbor with strong pro-German sentiment a few miles up the River Plate, in Buenos Aires.

Langsdorff underestimated the close connection between Uruguay and Britain, though technically neutral Uruguay was discreetly supportive of the British cause. The British minister in Montevideo pulled some strings and Langsdorff was left with three choices: abandon ship and allow its technology into British hands; face a British attack as soon as leaving port; or, scuttle the ship.

He chose the third option, sending his crew to Buenos Aires, taking the ship offshore and sinking it. He went to Buenos Aires to make sure his crew were safe and looked after, went to his hotel, wrote some letters, draped the ensign of the Graf Spee on the floor and shot himself. Survivors of the crew still live in Buenos Aires. 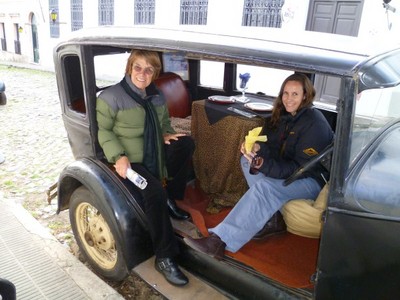 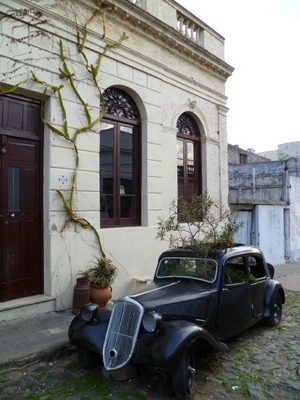 We weren´t blessed with nice weather in Uruguay, in fact we hadn´t been assaulted by wind, rain and cold like it delivered during the whole trip. However, it did give us the encouragement to visit several museums and galleries. One of the most interesting was the museum of Carnaval. Carnaval is celebrated in Montevideo with the same kind of gusto as it is in Brazil. Huge elaborate street processions of music, dance and amazing costumes take place every year. The processions incorporate much of the traditions brought to the region by African slaves.

The second half of the 20th Century saw economic decline in Uruguay as Britain ceased to monopolise trade and the US began to exert more influence on economy, trade, politics and military. The continent-wide social revolution movement of the sixties was expressed in Uruguay with the Tupamaro movement. It was effectively middle class desire for justice and equality, but with a more radical element. The government backlash led to a 12 year military dictatorship, denial of accepted freedoms, exiles and disappearances. Like Argentina, Uruguay still seeks justice in the aftermath of the dictatorship over 20 years on.

A walk along Montevideo´s beach reveals one grand old building. It is now the headquarters of MERCOSUR, which is a Common Market, established in 1991 between Argentina, Brazil, Uruguay and Paraguay. Bolivia, Chile, Colombia, Ecuador and Peru are associate members, and Venezuela has applied. As time passes it will be interesting to see if MERCOSUR can gather enough unity and strength to one day allow Latin America negotiate eye to eye with the US and alter conditions more in favour of its own people. 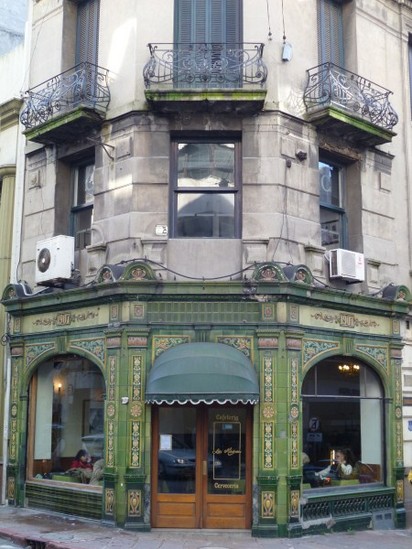 One of Montevideo´s inviting cafes

Under the current Frente Amplio (Broad Front) government, the Uruguayan economy and social conditions have improved again. Frente Amplio is a socialist coalition, which when elected in 2004, broke a century-long two party dominance of Uruguayan politics.

Being a Tasmanian, I was interested to read in a tourist book on Uruguay that the ´´most controversial development´´ in the country was a pulp mill in Fray Bentos. The book states that the pulp mill, ´´is considered, by Argentina, to be a source of pollution of the River Uruguay,´´ which is their shared border. Nine million acres have been declared suitable for pine and eucalypt plantations. I find this particularly interesting due to the different approach to honesty, which may or may not, be cultural. I cannot imagine many booklets for tourists to Tasmania mentioning the pulp mill, let alone being upfront about criticism of it.

I sat pondering how all the pulp mill mess back home in Tassie was shaping up as the ferry cut through the waves heading back to Buenos Aires and the beginning of heading to Southern Argentina. 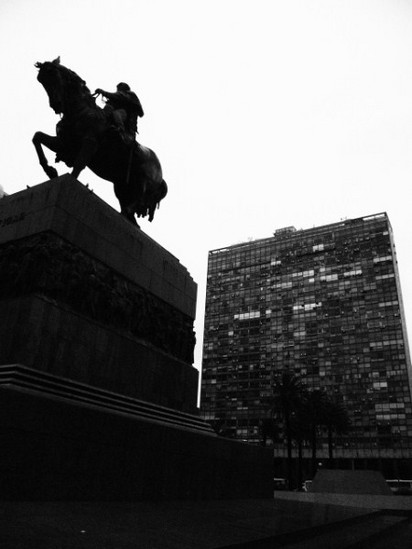