CUZCO is nestled in a valley of red brown hills, which are dotted with camouflaged mud brick houses that are the colour of the surrounding dirt that they have been made with. As such, mud brick houses change colour with the geology. It is easily the most ´touristy´ place we have been in Latin America and it forces you to think about whether or not the city´s people really benefit from the heart of the city being over-run by tourism. Most of the locals are still very poor and live in the outskirts of the city, the parts that tourists either don´t see or pass through by bus. From our experience most successful restaurants, tour companies and accommodation places are owned and generally run by Europeans and North Americans.

Part of the cause of this problem is the IMF and the US have pushed many of these countries into adopting the neo-liberal economic model for ´development´, which opens them up to foreign investment. The problem with this is very few locals can compete, as they can´t even dream of having the initial investment to open a business, yet for a wealthy westerner to do so over here is absurdly cheap.

Even though most tourists would never admit it, another problem is that many of them would rather stay in accommodation similar to that of home and eat in restaurants that feel familiar to them. This means that places like Cuzco are full of foreign-owned restaurants where people pay four to ten times the cost of a local meal for the kind of food they eat at home. The easiest way to be sure you are eating and spending locally is to dine at the market, every village has one. Though it can be a lottery, as you sit surrounded by locals and wondering where all the gringos have gone, you know you are eating what the locals eat and more importantly that your money is staying where it is needed.

A lot of the lower jobs such as cleaners, security and service go to the locals and they get paid around a dollar an hour. But servile work and meager pay isn´t quite the local benefit you´d like to see for the modern-day Incas whose sacred city has been conquered by wealthy foreigners. Though not for a second pretending we are any better than any of the other tourists here, tourism of this kind and this scale often feels like another form of colonial take-over as the profits continue to flow elsewhere. We do try to give our money to the locally owned businesses, but sometimes it´s near impossible.

All this said Cuzco is still a fascinating, beautiful and fun city. It was the centre of the Incan empire. Though the Conquistadores tried to erase the Incan city and build a Spanish one on top of it, Incan architecture and design is still everywhere, albeit often underneath the colonial. The so called ´last Inca´ had two sons, one controlled the north of the empire and the other the south. By around 1530 they were engaged in a civil war against each other. This was the perfect situation for the Spanish who arrived a few years later and managed to get the northern Incas to help them defeat the southern and take Cuzco before betraying the northerners as well.

Colonial architecture sits atop that of the Incas

Considering the Incas were only around about 300 years they left a huge mark on this part of South America and on human history. The most impressive remains are Saqsaywaman. The Incan leader of the time planned and designed Cuzco to be shaped like a puma, with Saqsaywaman the head, even including zigzagging walls that represent the teeth.

The teeth of the puma, Saqsaywaman – Cuzco

Legend has it that the Incas originated in the area of Lake Titicaca, some believe on the Lake´s Isla del Sol (Island of the Sun) within what is now Bolivia. Titicaca means mother-lake in Quechua (one of the languages spoken by the Incans). These original Incas went in search of the earth´s navel and found it where Cuzco now sits.

Three animals are of huge importance in Inca culture. The condor is considered a messenger and a transporter of souls to heaven. This bird that can be found at over 6000m represents the heavens. The puma represents the earth and power. The serpent represents wisdom and the underworld.

We began the five day, 74 kilometre Salkantay Trek to Machu Picchu, which follows an old Incan trade route on which they would have walked and used llamas to transport goods. Fortunately for us and the llamas they now use mules, courtesy of the horses and donkeys introduced by the Spanish. The trek passed mountains of over 6300 metres and their disappearing glaciers. Our guide Niko showed us where the main glacier used to end when he began guiding ten years ago, which was frightening. He and his fellow guides are very concerned about climate change seeing first-hand the speed of change it can invoke. A mountain that was permanently covered in snow less than twenty years ago is now barren brown rock. The lack of snow melt further down is changing the lower lying areas too.

Images of the trek

The highest point we got to on the trek was about 4600 metres going over a ridge below the glacier of Mount Salkantay and above a bright green lake. Mountains were sacred to the Incas and viewed as protectors. It´s not hard to see why when you´re in this area, you get that feeling of solace and awe that even as a non-Christian I get when standing within the splendor of an old cathedral. The Incas left offerings such as coca leaves, animal bones or a rock from elsewhere to the mountains in places such as this ridge, in return for protection.

The first day was quite difficult as we climbed about 1200 metres and dropped about 1000 again before camp. In addition, the altitude makes your lungs feel like they´re only half open. The hardest day though was the fourth, though this was self-induced. After hiking for about five hours on the third day I partook in a two and a half hour game of football, tourists versus locals. The ground was very lumpy and on a huge gradient. Of course the tourists ended up going uphill for about three quarters of the game and we were demolished 7 – 2. After this game and several beers that are impossible to pour without a massive head due to the altitude, I was very stiff for the 23 kilometres to Aguas Calientes on the fourth day.

Reaching Aguas Calientes was great as it meant hot showers and a bed. It also meant the next morning we would finally be at Machu Picchu after about 20 years of wanting to visit it. We had to start walking at 3:30 am to make the steep climb to the gates early enough to ensure we were one of the first 400, meaning we could access and climb Huayna Picchu, the famous mountain behind Machu Picchu in all the pictures. We made it to the gates by 4:30, climbing the steps by torch light.

It was rewarding doing a long walk to get to Machu Picchu, particularly the steep steps on early on the final morning, partly because the route was so beautiful but also because long treks were of such importance to the Incas. Long journeys by feet were required of priests and kings, and Machu Picchu itself was the end of many Incan pilgrimages. Finally laying eyes on the remains of this sacred and so long lost city was quite overwhelming. We were in as soon as the gates opened at 6 am and as such got to see the sun rise from behind surrounding mountains and illuminate the stone city.

Fortunately the Spanish never found Machu Picchu and as such it hasn´t been destroyed or built over. When the Incas finally lost Cuzco to the Spanish in around 1540 a messenger was sent to Machu Picchu instructing the inhabitants to abandon the city and form a new capital in the jungle area of Vilcabamba. The new capital never really happened, but they did stop the Spanish finding their sacred city.

The city was ´found´ again in 1911 by Hiram Bingham, though he did find a few families living within. It is believed that the city was built between 1450 and 1540 and was unfinished. The site of the city was chosen due to being a natural sanctuary protected by huge mountains on every side and due to the energy within the granite of which the mountain and its city are made. Most of the artifacts found in the city are at Yale University. Peru wants them back but Yale says there are no decent museums in Peru to house them.

Having a full day at Machu Picchu allowed us to climb Huayna Picchu and to walk to the old Inca Bridge nearby, as well as thoroughly explore the city. It´s a place that despite the hype blows all expectations and truly feels sacred both in a natural and human sense.

Now we were heading south to Bolivia stopping for a couple nights in Puno on the northern shore of Lake Titicaca on-route. We caught Puno at an interesting time as it was the week of national celebrations of independence and because southern Peru had been declared in a state of emergency due to abnormally cold weather. Hundreds of highland villagers have died due to extreme cold. 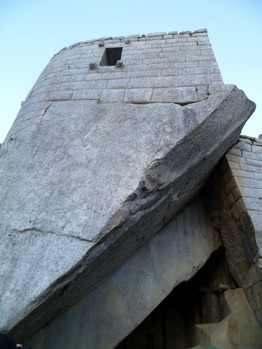 Urban centre of Machu Picchu and nearby temple to Pachamama