IT HAS been a strange and difficult few weeks dealing with the loss of my oldest friend Leon from afar. We´ve lost a special one, to a river, to nature. Still fragile and pensive we made it to Peru, thankful for the warm welcome the country´s given us. A few days in to Peru another grieving friend, who watched Leon disappear, recommended solace be found in the natural world. The night after receiving that advice I awoke from a dream in which I was writing the words ´´take time to sit with Mother Nature, let her embrace you, converse with her. Let your family of millions surround you.´´

Fond memories flooding and with these words echoing in my head we began walking to Gocta Falls in northern Peru, at 771m, one of the highest in the world. A little after 6am, not long after leaving a tiny sleeping village where we had breakfast of fried plantains, egg, bread and coffee, we headed into the deep green valley and it began to rain. Every cool drop from above that graced my body, a little wet reminder of life.

I have always thought of rivers as both a calming and exhilarating force, a life force, the veins and arteries of Mother Earth. As this river plummeted hundreds of metres before us I stood without words or language, but flooded with feeling. There is a spirit in nature, be it something, or everything, and who we have lost she has found. And in her sacred unspoilt places she lets us be with those people. 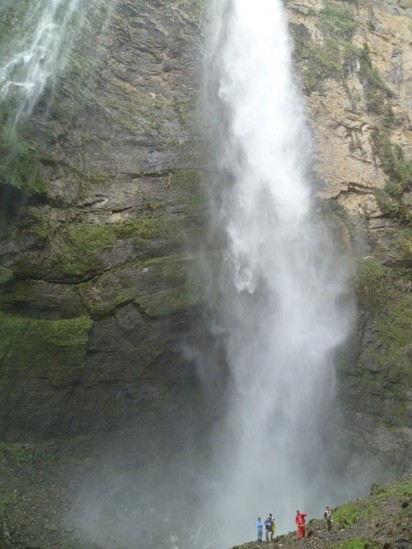 Stepping back a few days – we left San Ignacio in the far north in another Corolla on route to Chachapoyas. We shared the trip with several people. A couple of workmen, a local school girl and a lady with a bag of guinea pigs destined to be fattened up for the dinner table. The sixteen year old girl explained to us that in Peru the ´coming of age´ birthday is like Australia for boys, 18 years, but for girls it is their 15th birthday.

Three separate car trips and a three-wheeled moto later we made it to Chachapoyas, heart land of the Chachapoyas people who have lived in the area since pre-Inca times. It´s a pleasant little colonial town surrounded by mountains, rivers, waterfalls and ruins of various cultures. As we got further from the border we passed from the lush light green rice paddies of the river plains to the dark green coffee plantations. Rice paddies were not something we were expecting in Peru. 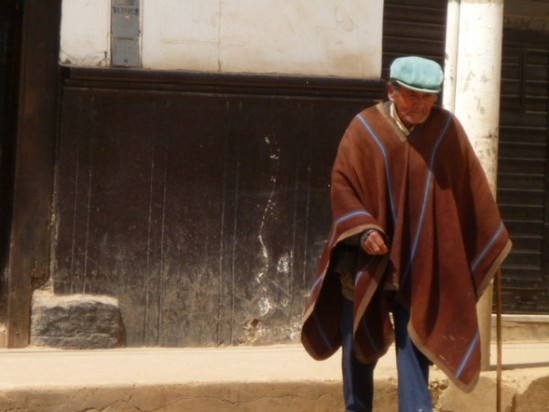 We spent a day at Kuelap a huge hilltop pre-Inca fortress 3000 metres above sea level. The site consists of three huge rings of stone walls, up to 20 metres in height, which once enclosed over four hundred buildings. The village is about 600 by 110 metres and was occupied from the sixth century AD until the Incas conquered the Chachapoyas shortly before the Spanish conquered the area in the mid sixteenth century. Most of the structures are cylindrical and predominantly ruined, which is thought to be due to the Incas burning the village when they conquered the area. An interesting component of the design of the dwelling is that they all have a small internal walled section for guinea pigs, an important food for many centuries. We had half a guinea pig each for lunch, sliced right down the middle. It was over-cooked and pretty tough.

The entrance to Kuelap starts about three metres wide gradually narrowing to less than one and flanked by a wall of almost 20 metres in height. Most scholars believe it was defensive, though some believe it symbolised a massive vulva. One can only hope. 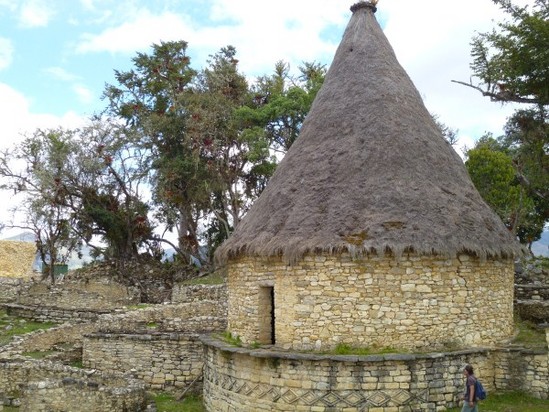 We then headed south towards Nasca with a 24 hour bus to Lima and then another eight to Nasca. The changes in scenery couldn´t have been more dramatic as we shifted from lush green mountains to sandy desert. The desert to the south of Lima was dotted with thousands of tiny thatched houses that made it look like an African refugee camp.

As I stared out the window thinking how fortunate I am to have been born where I was born my mind strayed in to the grotesque world of global economics. I doubt anyone could travel independently with eyes open in Latin America and believe in the neo-liberal free market economic model. To argue it is fair is to argue a fight between a heavy weight boxer and a disabled child is fair. Fairness doesn´t survive where there is a gross imbalance of power. The beneficiaries of this system are those with economic and political power, a highly concentrated minority. It´s simply the term we use to describe the continued exploitation and disempowerment of the world´s poor and to ensure the profits garnered from human and natural resources continue to pass into the hands of the world´s wealthy. It is neo-liberal principles that stop wealth going where it is needed. It´s a system that promotes both external and internal colonialism, creating a social hierarchy often still based on race.

Fortunately I was soon distracted by the huge sand dunes and Pisco vineyards. Pisco is a kind of white grape brandy. Pisco Sour is a common drink is the region made with Pisco, egg white, sugar and lemon juice. After 32 hours on consecutive buses we made it to the dusty little desert town of Nasca and celebrated with a Pisco Sour. 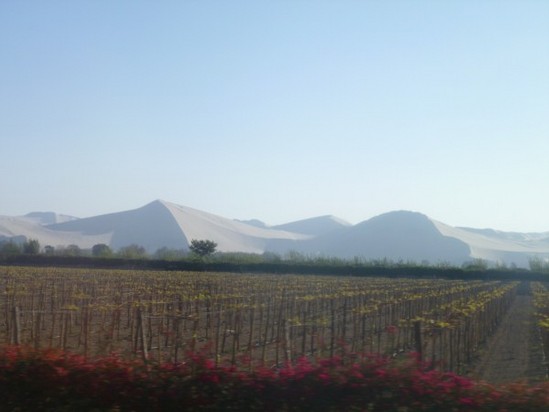 Pisco vineyard and the desert of coastal southern Peru

Flying over the Nasca Lines was something else. Why these people made huge precise figures in the desert that they would not have been able to see fills you with wonderment. How they managed to make them so precise is also intriguing. The figures, which include a monkey, humming bird, owl man, spider and geometrical figures amongst hundreds of others can only really be viewed from the air. The owl man is also known as the astronaut as he looks like a little space man, further fueling theories that the Nasca people must have had extra-terrestrial assistance.

We were lucky as the people that were meant to by flying with us didn´t turn up, so we got to go in a four seat plane, just two pilots and us. The plane was like a Fiat 128 with wings. It had similar little bucket seats and about as much space inside. I hope it was more reliable. The tiny plane did figure of eights over all the major desert symbols and though I had pins and needles in my whole body from the experience it was well worth it. The symbols were basically unknown until a researcher flew over the area in the 1930s. 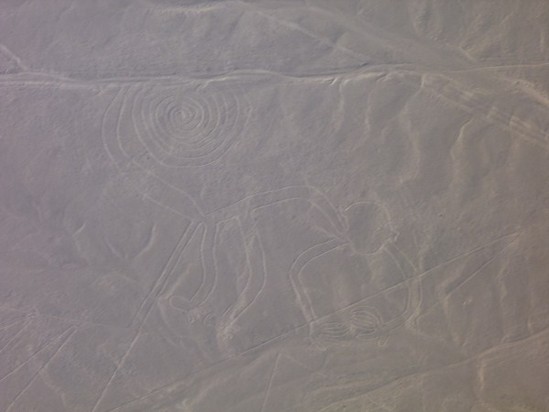 Huge Nasca monkey from the air

Nearly all the advertising billboards we´ve seen in Central and South America feature beautiful tall white people. In Australia we often lament on the negative impacts to self esteem and confidence when all advertising shows us is skinny beautiful women and bronze buffed men. It makes you wonder what effect this imaging has on a people who have different skin colour, shape and race, not to mention the different stratosphere of wealth generally portrayed in the advertisements. Advertising is one of the least democratic components of the modern world. We are all exposed to hundreds of advertising messages a day but have very little say in which messages we are exposed to. We can choose what to listen to or what to read, but advertising follows us everywhere and is rarely out of sight.

The 15 hour bus trip from Nasca to Cusco was a nightmare. A family of about seven had squeezed into four seats to save money and two of the boys vomited basically the entire trip, much of which was spat into the isle. Behind us were a group of ladies who gossiped loudly all night. Then there were the movies, which were painfully loud and fluctuated between cheese and torture. Our soundtrack to Cusco was vomiting, gossiping and torture. I have never been happier to get off a bus. We made it to a hostal and even the coca tea didn´t keep us awake. 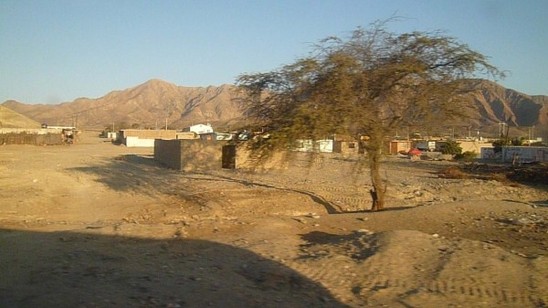 Meanwhile, once in the ether there is no telling where you might end up: