NEXT we headed on an overnight bus to Puerto Ordaz in the east, which is basically the industrial heart of Venezuela. It is a huge, like Bell Bay multiplied by a hundred. Even though it didn’t drop under 30 degrees during our time in Venezuela the long distance buses keep an internal temperature of around minus 30. We arrived at the station at about 8 am only to find the buses we had booked to drive us around for two days unavailable due to strikes over annual bonuses. Anna was happy that we had to catch a taxi to our first destination mainly because the taxi driver was playing some prime 80s tunes mixed to a catchy techno beat and thus the car became a party for a short time.

We visited a ceramic brick factory that has been reclaimed by the workers. It is a couple months away from resuming production after sabotage by the owners. The motivation of the workers to make the factory work as a cooperative in partnership with the government was impressive.

On the way back to the hotel we visited an area of vacant land claimed by several hundred landless families. They were having their weekly community meetings when we arrived unannounced and as such we didn’t have very long talking with them. The area of land had been private land. When they moved in the owner appeared and starting trying to charge them rent, which no one paid. The owner then complained to the authorities, who investigated the case and found the owner hadn’t been paying land tax for over a decade and decided the land therefore wasn’t his. The land now belongs to the community. 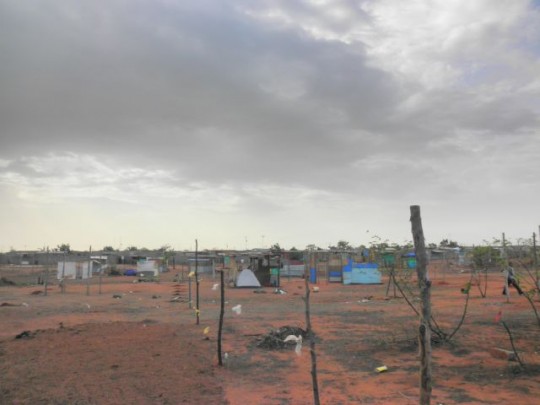 The living conditions are very basic, some are still living in tents, but the community is new and is organising. As they organise they are able to improve the area and gain governmental assistance. We saw a similar community nearby that was older where the government has now built the residents proper dwellings and installed services. This is the aim for the new community. All the people we spoke to were passionate Chavez supporters who believe for the first time their interests are a concern of their government and their leader.

Just outside Puerto Ordaz is a huge nature reserve, which contains several large waterfalls, beautiful forest and wild monkeys. The water that feeds the waterfalls comes from a huge hydroelectric scheme that supplies a whopping 68 per cent of Venezuela’s electricity. Severe drought over the past year or so is causing electricity shortages throughout the country. 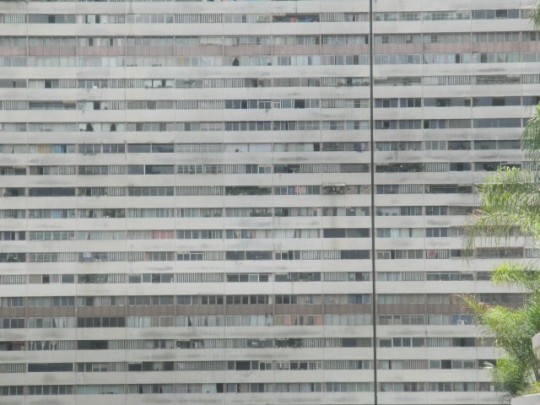 Back in Caracas we wandered about ‘Barrio Veinte Tres de Enero’ (Neighbourhood January 23) with a community leader and spoke to locals about their organisation through community councils and the general progress in the area. This area has been well organised as a community since long before Chavez and was an important area in past uprisings.

The 56 buildings that make up the Barrio were built in the fifties to house the army under the dictatorship of Marcos Perez Jimenez. In 1959 there was a general uprising against the Jimenez, partly organised by a naval admiral but also by many left-wing organisations and the Communist party of Venezuela (PCV). Jimenez was overthrown and apparently fled the country in such a hurry he left suitcases full of Treasury money on the runway. He lived out his days in luxury in Spain.

With the overthrow of Jimenez poor people invaded these new buildings as construction had just finished. The locals say that the keys were all hanging on a wall so each family grabbed a key and kept trying doors until the key worked. The name of the barrio was initially ‘12th December,’ marking the date construction of the buildings finished. However, the community renamed it ‘23 January’ to celebrate the date of the overthrow of the dictator, Perez Jimenez.

On May Day we marched and partied with several hundred thousand others for several kilometres through the heart of Caracas. The atmosphere was amazing, as the river of red t-shirts flooded through the city overflowing with song, goodwill and hope. There were rumours that Chavez was coming, but it turned out he was in another country at a conference at the time.

On the last morning of the organised part of the trip we had a talk by, and discussions with, Eva Golinger who has written several books on Venezuela, particularly US interference. Eva is a Venezuelan-American attorney who has spent years obtaining top-secret documents from the CIA, State Department and other departments under the Freedom of Information Act. The documents leave no doubt regarding US support for the 2002 coup against Chavez and their continuing financial and logistical support for various anti-Chavez movements and media outlets. Her books include the The Chavez Code and Bush versus Chavez.

It was fascinating and depressing to hear factual accounts of the depth of US involvement in Venezuela and other countries in the region. I left the discussion almost without hope for Latin America, with the feeling that if any government tries to act for its own people, to improve the life of its poor or to regulate multinationals socially and environmentally, they would likely only last a few years before the US managed to orchestrate their downfall. This is exactly what has happened in almost every Latin American country over the last century, for example in Nicaragua, Guatemala, El Salvador, Colombia, Brazil and the list goes on. Yet, this is why Venezuela is so interesting. It has survived the interference longer than is historically normal.

In the afternoon we took a detoxification from depressing information and caught the cable car up Pico el Avila. Caracas flows along a deep valley with mountains of approximately 2000m in height. This is one of those mountains, covered in dense dark green forest, which must afford the city some oxygen amongst the carbon monoxide. Seeing over the other side was a pleasant surprise, it slopes steeply downward past small indigenous agricultural plots to the turquoise ocean, which I hadn’t realised we were so close to.

With a few days left we bussed up and down tiny winding roads to Colonia Tovar, which is, of all things, a German village in the middle of Venezuela. It was founded in the early 19th century and it was only in the 1940’s that Spanish became the official language and marriage outside the community was permitted. It was a surreal place and it did feel a bit wrong being in such a place when in Venezuela, but we climbed a nearby mountain and the forest was stunning, like rainforest but with tall palms interspersed through it.

Our time in Venezuela finished with a taxi ride of death. The trip was an hour and a half and was almost entirely on tiny roads with no barriers and ravines hundreds of metres deep off the edge. Our driver seemed to be trying for a record time and we were getting thrown around so much that our seatbelts were locked almost the entire journey. In addition, my bladder was close to bursting point and I couldn’t remember how to say piss in Spanish and for some reason was embarrassed to use the word urinate. I guess I just imagined someone in Australia saying, “Excuse me, I need to urinate.” After several painful minutes I solved the internal crisis, managing to find the words for “I need a tree to go behind.”

I arrived in Venezuela with a fair amount of cynicism but with a desire to hear the other side of the story, that is to say the Pro-Chavez, pro-revolution, pro-socialism side. I leave Venezuela unsure if the Bolivarian experiment can work, though impressed by what I have seen of it. Hoping the experiment will be allowed to plot its own course by the US, Europe and large corporate interests in particular, is pointless. Venezuela will not be left alone. I only hope they fail in their interference and in the process awaken more citizens of the world to the true motivations behind trying to stop a democratic nation’s shift to a more socialist society.

The world should watch Venezuela with interest, and in my opinion, with hope. Simply because the capitalist liberal-democracy that dominates our world promotes inequality and is unsustainable. If another way is or isn’t possible it may become a life-line or a lesson to all of us. 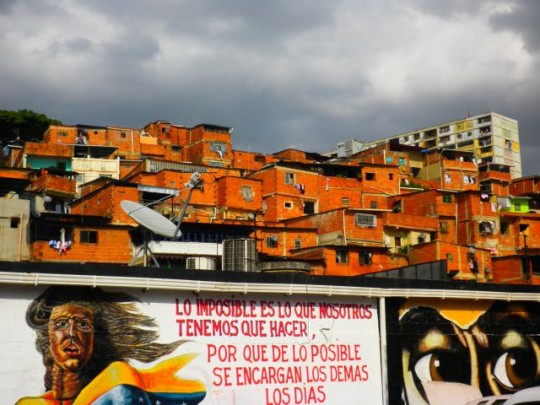 Graffiti in ‘Barrio Veinte Tres – “The impossible is what we must do, because others and time will do the possible.”