FOR decades before the failed Chavez-led coup in 1992 Venezuela had a false democracy. The false democracy was a two party system where the two parties were virtually identical and had an agreement to switch power each election (every five years). The agreement was known as the ‘Punto Fijo Pact’. This period followed one of several long dictatorships.

The seed for revolution had been planted long before Chavez. Venezuela is a rich country, yet most of its people are poor. There is a huge gap between rich and poor. This is the strength of Chavez as he appears to represent the poor majority, in action as well as word. It would be rare to find a rich Venezuelan who supports Chavez as those who hold the wealth rarely want it redistributed.

It has been in the interests of many internal power brokers and of the US for Venezuela to be completely oil dependent, which it now is. This dependency ensures a steady flow of oil to the US and a need to import US goods (Venezuela is the most ‘Americanised’ country I have been to, there are US goods everywhere). The riches of the oil boom effectively killed off agriculture and other industries. 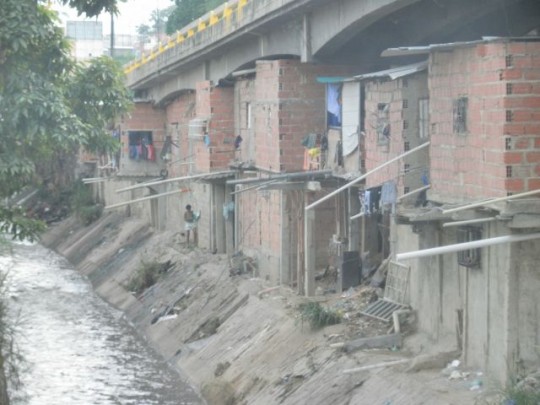 ‘Homemade’ homes under a highway in Caracas

Chavez was leading part of a growing group within the army, known as the Bolivarian Revolutionary Movement (MBR 200) who were disgusted by the corruption and abuse in the army and the government. The 200 part of the name is due to the year the group formed being the 200th anniversary of the birth of Simon Bolivar. In 1989 an IMF neo-liberal privatisation package caused an uprising known as “Caracazo” after the poor suburb it started in. The package resulted in significantly greater costs for the poor, including the doubling of fuel prices overnight. Presidential candidate Perez campaigned on the promise of not agreeing to the package and won. His first action as President was to ratify the package. This caused massive protests and Perez responded by ordering random massacres in the poor barrios. Constitutional rights were suspended on an indefinite basis, human rights abuses became the norm and thousands were killed.

The MBR 200 group within the army refused to participate in the massacres. It is worth noting that the Perez era was described by the US as a “model democracy” even during the violent crack downs and the polls that showed 84 per cent of the population were against the government.

These events increased the urgency for the MBR 200 group within the army, that and the fact that they believed they were close to being found out. Chavez led a coup with MBR 200 against Perez, failed and was imprisoned. Chavez was allowed to speak to the media to call off the coup and he did something almost unheard of in Venezuelan history. Basically he said, “I did it, this is why I did it, I failed and I take full responsibility for my actions.” People liked his honesty. He also told his followers to lay down their weapons and that they would not win this way and then said the two words that became the two words that would be repeated throughout the barrios as a transmission of hope for change, “por ahora” (for now). He said, “We have failed, for now.”

The fuse Chavez lit with the words “por ahora” ignited hope particularly within Venezuela’s poorer communities which continued to burn during his two years in prison. He was eventually released due to public pressure. After his release he quietly spent about four years travelling to basically every village in the country and talking to people in relatively impromptu meetings. Grassroots support for Chavez grew rapidly and much to the surprise of the opposition Chavez won the election in 1998. The elections saw many who had never bothered to vote before turn out to have their say.

A US-backed coup to overthrow Chavez in 2002 succeeded for two days before civilian and army support for Chavez had him back in the presidency. There is constant plotting against Chavez, but his empowerment of the disempowered seems to be keeping him in government. His support for community councils and participatory democracy has involved thousands who were never politically represented before. Voting is up significantly with stalls for electoral enrolment in every metro station and in many other public places, complete with electronic finger-printing.

The Chavez revolution is an experiment that is constantly evolving. It is establishing structures which every year become less top-down. The end goal is a socialist participatory democracy. Who knows if it will work or if internal or external forces will allow us to see if it can, but for now it is undoubtedly improving life for the majority of Venezuelans and its progress should be of interest to people everywhere. 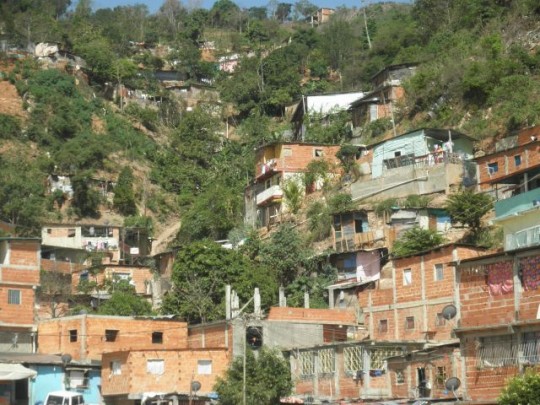 Low density barrios on the outskirts of Caracas

Our fourth day in Caracas was the day we tested the medical system of Venezuela from the inside. Anna awoke with a brutal tooth ache and a molar that had all but turned black. It seemed it may be something serious. We had heard that Chavez had introduced free health care for all, but what would it be like. I have to admit I was thinking “oh fuck, of all the places to have a medical emergency, why did it have to be Caracas?”

We found out where the closest ‘Barrio Adentro’ was and fortunately it was at the university in walking distance. ‘Barrio Adentro’ means something like ‘within the neighbourhood’ and is the system of having free health clinics in every area to ensure everyone has access to medical help. Many of the doctors are Cuban, as Venezuela has a shortage of doctors (well a shortage who are willing to live and work in the poor areas anyway). Cuba and Venezuela have a deal where they swap oil for doctors.

We wandered in and found the dental section where they took our names and told us it would not be a long wait. After about five minutes a dentist came in to the waiting room and gave a 20 minute Powerpoint presentation on dental problems and appropriate care. From the presentation we both thought the problem may be an abscess under the tooth. Five minutes later we were called in and discovered we had diagnosed it correctly. After x-rays, drilling and much analysis the dentist decided it was a very bad abscess that extended below the tooth and we would be best with a specialist. The two hours of help was free and we were referred to a specialist based at the Red Cross building in the city centre.

19th Century painting in a park in Altamira, a wealthy suburb of Caracas

At the specialists we saw another dentist but unfortunately the specialist himself wasn’t there. They decided it was too bad and we should return to see the specialist the following day. So Anna spent the night with more hole than tooth and we returned the next day. To our dismay the specialist was seriously ill. We were referred to a private clinic a couple hundred yards away where we were seen instantly by a brilliant dentist called Isabel, and so began six sessions of drilling, cleaning, root-canalling and rebuilding.

I am glad to say it all ended well and we feel very grateful that a couple foreigners should be treated so well and that what could have turned out as a ‘fly home situation’ ended up fine.

We have met a few people now who are anti-Chavez, including the dentist Isabel. She describes him as “crazy man.” However, the only reason we have been given so far as to why he is so bad is that it is very difficult to get hold of US Dollars in Venezuela at the moment making overseas travel very difficult due to the low value of the Bolivar.

The next day on our way to a meeting at BanMujer we passed a large vacant site in the city centre that is to be developed but not for another year or so. As such, the government is paying a small cooperative of unemployed the minimum wage to grow vegetables on the site to be sold cheaply at the edge of the site. It struck me as a great use of a couple hectares of temporarily useless land. It got me thinking about the Myer site in Hobart.

BanMujer is a women’s bank established by the Chavez government. It provides low interest loans (lower than current inflation) to women in extreme poverty. In fact the official interest rate is 19% and the BanMujer rate is 6%. Small groups or families can receive loans of 5000 bolivars ($1,250) and cooperatives up to 50,000 bolivars ($12,500). Approximately 50 per cent of the loans go to small scale agricultural projects. Recipients four years to pay off the loan and if they do so they are automatically entitled to another loan 50 per cent larger. Projects and bank staff can involve men, but they must be run by women. For example, a cooperative must have two women for every man and decisions must be taken by women.

Bank staff undertake assessments of the proposals of potential recipients and of reasons why recipients have not made their payments. If they find that payments have not been made due to external factors rather than the negligence of the recipient(s) an assistance plan is provided.

The bank provided other benefits in addition to a financial leg-up. Project candidates have to do their own economic feasibility studies (with guidance) and the bank provides training and education, in areas such as running cooperatives, accounting, women’s health, sexual education and women’s medicine. 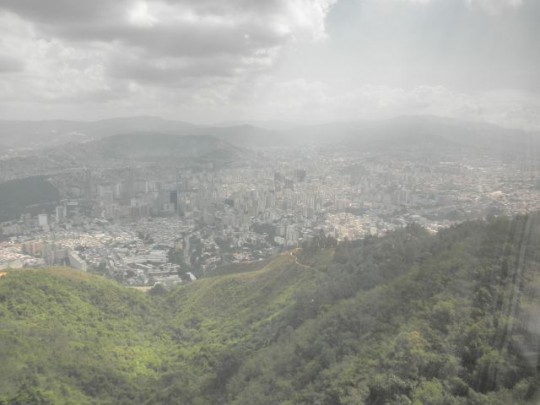 Due to another couple hours at the dentist we arrived late for the meeting at the Indigenous Parliament of Latin America with one of Venezuela’s three representatives Yuis Aray. We were there long enough to catch some interesting points. She believes that the Chavez government has greatly improved the recognition of the country’s indigenous peoples, thought to be only a few per cent at most unlike Ecuador, Peru or Bolivia to the south, which have high percentages of indigenous. She explained that in the past few years, history and school book have stopped referring to the indigenous in the past tense and now more appropriately use the present. How strange it must have been reading about your people as if they no longer existed. 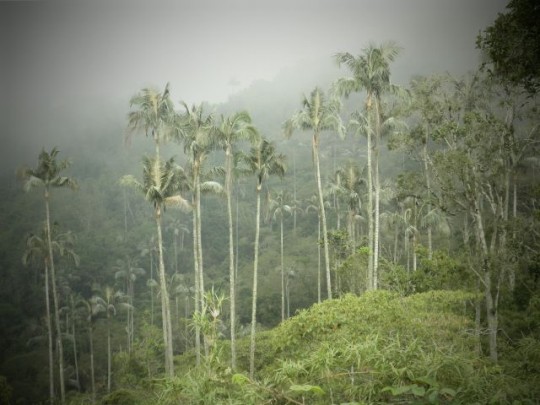 Forest about an hour east of Caracas