IT IS important to begin these impressions of Venezuela by explaining that our time in this country, in which we have been lucky enough to get beneath the surface, has confirmed suspicions that 90 per cent of what we hear about Venezuela in Australia is utter nonsense. It’s not in the paper it is on the wall – the US is at war with Venezuela, the country with the world’s largest oil reserves and the fourth largest of natural gas. The US has had control of these resources since their discovery over a hundred years ago via hand-picked dictatorships and false democracies. They have lost control of this country, thanks, not to Chavez, but to the poor majority he inspires.

However, US strategy is clear, and thinking back to Australian media and the information we receive about Venezuela, I fear they are winning. It’s a simple yet sophisticated strategy used against many countries to justify interference or attack. Since the failed US-backed coup against the democratically elected President Chavez in April of 2002, the US have switched to Plan B, which is a campaign to swing global public opinion, through its influence over international media, against the Chavez government to justify overthrowing it. It’s working.

Of course this strategy is in combination with funding opposition groups and supporting disruption. Many locals believe there are US-trained Colombian para-militants carrying out random killings in the country to help create a feeling of insecurity under Chavez rule. The media tactics are clever and need no truth. For example, un-named US officials will release a statement that Venezuela is supporting FARC rebels in Colombia, which receives headline treatment on the news. A few days later a quiet press release is issued stating that actually they have no evidence of this, and of course the second release is deemed ‘un-newsworthy’ and the public are none the wiser.

City monument that represents continuous revolution, black and red have always represented the struggle of the poor.

A good example of this slanted international reporting is when Chavez moved to change the constitution to allow Presidents to sit more than one term. It was reported as the power hungry dictator not willing to let go of power and was international news. Yet, Colombia tried to do the same and it didn’t make mainstream news. It is also worth noting that most countries, including Australia, have a system where their leader can sit as many term as they like as long as they are democratically elected. It was barely reported at all that the Chavez government actually proposed a more democratic system than we have by including the provision that as soon as a president is half way through their term anyone can call a referendum to expel them if they collect signatures of 20 per cent of the electorate. This provision has already been used unsuccessfully by the opposition.

In the first few weeks of 2005 more than 50 articles were published in major US newspapers and programs shown on TV in the US about Venezuela, more than 85 per cent of the consulted “experts” quoted in these articles were connected to institutions or publications of the opposition (1).
The USA also sanctioned Venezuela for not sufficiently supporting their war in Iraq in the form that no US companies could sell arms or military technology to Venezuela. As such, Venezuela has been forced to look to other countries for military development, something the US now uses to argue that Venezuela is becoming a rogue state. 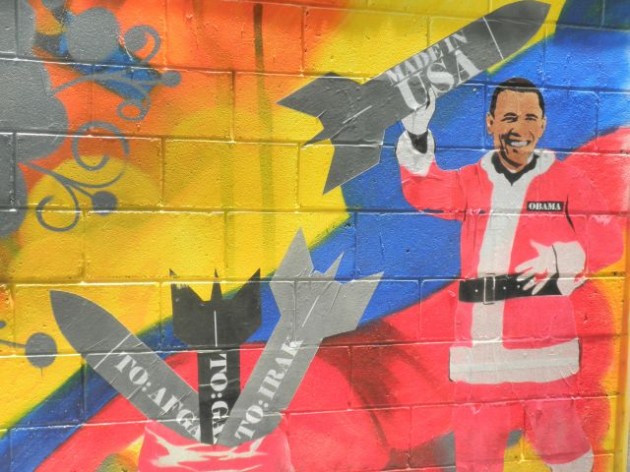 Graffiti showing how many here feel about the USA

The US is also surrounding Venezuela militarily, increasing its presence in Brazil, Peru and the Caribbean, and establishing seven new bases in Colombia. Many fear that Colombia is becoming ‘an Israel of South America,’ a place from which to wage war and control the area. Things have worsened under the Obama presidency, which is not to blame Obama. US international policy is State policy, not party policy, it matters little which party is governing. Strategy may change but policy doesn’t. History shows policy hasn’t changed for a couple centuries, a relative moderate like Kennedy was in office when Cuba was invaded as was Carter when the US waged war on the poor of Central America for a decade.

The only hope is that they have left it too late and the Chavez government is too popular, that enough people around the world realise most US international policy is based on lies and imperialist interests. If global media undergoes a revolution of its own and begins to search for truth before headlines and advertising dollars, then this could offer a lifeline also.

So anyway, I began my time here with a head full of negative impressions and cynicism about the ‘revolution’ led by Chavez. I had also been told that Caracas is “the scariest place on earth” and from another it was “officially the worst city I’ve ever been to.” I was expecting to find Caracas interesting, but not to like it. 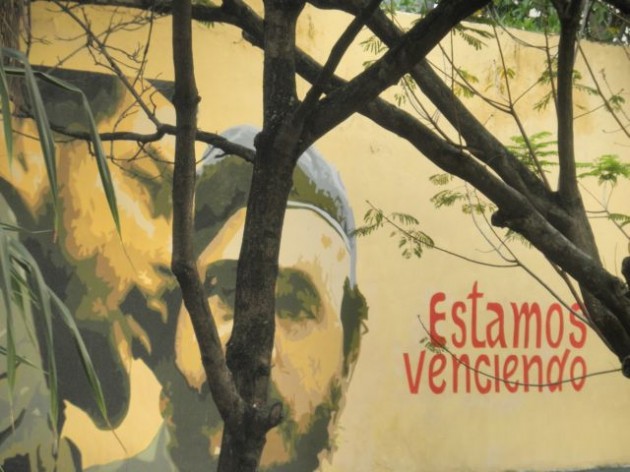 Graffiti – Che and Castro ‘We are winning’

The drive from the airport was spectacular, as we left the coast and wound up the steep valleys where the deep green dense jungle meets the multi-coloured barrios (slums) that somehow cling to the slopes like lichen to a cliff I was reminded of pictures I had seen in magazines. The hillside barrios are so densely built and effectively home-made that they look as though if one dwelling toppled thousands would go with it. In fact, a few years ago a landslide buried 20,000 people in this area and left hundreds of thousands homeless. The barrios grow organically as people find some vacant land and begin to populate it. Often these people are immigrants from countries such as Peru, Bolivia and Colombia seeking a better life. Of Venezuela’s 26 million inhabitants, four million are Colombians.

We had signed up for a ten day study tour organised by the Australia – Venezuela Solidarity Network, not because we are members, but because we saw it as an excellent way to learn as much as possible about the country in a short amount of time.

We met up with the rest of the group, there were about fifteen of us. I was pleasantly surprised by the diversity of the group, which included representatives of various Australian unions including the CFMEU and the MUA, a lawyer from Montreal, an Amnesty International employee, a high school teacher and a student and writer from Texas. On the first night we also met an interesting French couple, the 82 year old Luis and his wife Anne. Luis is a veteran of the French resistance in WWII and led a column of guerrillas under ‘Che’ in the Cuban revolution. They also lived in San Salvador for four years during the Salvadoran civil war, working in the French embassy before it was abolished and sheltering children orphaned by the war.

Day two began with a lecture from Marcelo, a senior academic at the Central University in Caracas, on the history of Venezuela from the first known human inhabitation thousands of years ago, through the Spanish conquest up to the present. The afternoon consisted of a free tour of the centre of Caracas complete with about 20 actors and 10 guides. The free tours are part of Venezuela’s bicentenary celebrations. This year marks 200 years since Simon Bolivar liberated Venezuela from Spanish rule. The tour was brilliant every time we walked 100 yards to another site there were actors waiting to portray the story. The tour ended on the bridge that saw protesters shot during the 2002 coup. Local media edited film of protesters who were shooting at opposition snipers, to make appear as though they were shooting at those who were actually victims of the snipers. Of course these were the images CNN and Fox showed the world. The next ‘Postcard to TT’ will explain more about the 2002 coup, the rise to power of Chavez and what the revolution actually means. 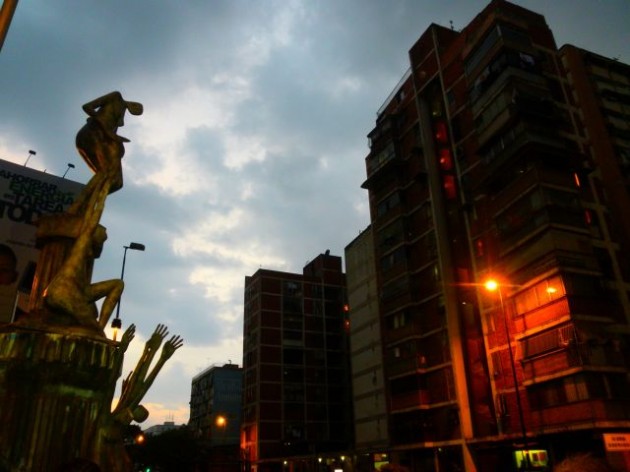 Night falls on monument to those killed during the 2002 coup

The next day we enjoyed a free classical concert of music from the 19th century related to the country’s independence. We saw Hotel Alba, which was the Hilton but has now been taken over by its workers. There are beautiful murals everywhere in Caracas telling all sorts of stories. In the afternoon we had a talk from an expert on the Venezuelan labour movement, including union movements, co-operatives and the reclamation of factories by workers.

A few things that stand out walking about Caracas are that utilisation of any free space, including under over-passes where I have seen public chess playing areas that have many tables complete with pieces. There are also stalls everywhere selling books. These book stalls often include small publications of individual national laws and the constitution. Clothes shops also appear different as the mannequins are of all shapes and sizes, as opposed to back home in Australia where they tend to all be verging on anorexic. 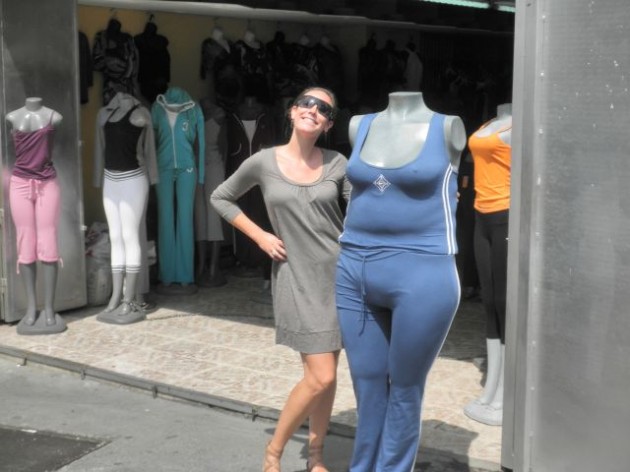 Three days in and I love Caracas. It has a brilliant buzz, it is different to any other city I have seen, there is colour everywhere and we haven’t had even the slightest negative experience…