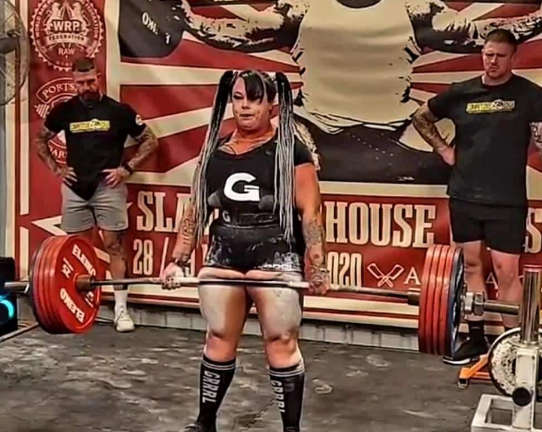 Tasmania’s champion powerlifter, Jess McCullum, will make her bid for the women’s deadlift world record on Sunday, 11 September, in Sydney.

Years of training, preparation and sacrifice will culminate in a few seconds of extreme effort to break the deadlift record at the aptly named ‘Breakthrough Battleground’ competition.

“I’ve finished my peak training sessions and from now until Sunday it’s about fuelling up and eating good protein and carbs.”

McCullum successfully deadlifted 280Kg at a competition in June, beating her own Australian female record of 272.5kg, which puts her just 9kg away from the world record of 289kg.

“I’m usually quite a calm person ahead of big comps but with me being so close to breaking the world record I’ve actually been quite nervous, the most nervous I’ve ever been ahead of a big comp,” she said.

McCullum’s journey to the world record attempt has not been easy. She manages epilepsy, the responsibilities parenting, works as a security guard, and recently had to train through a bout of COVID-19.

The weights McCullum lifts in training are so heavy that for safety reasons she needs three to four spotters who are strong enough to intervene if something goes wrong.

“When I’m lifting the big weights it’s maximum effort and often a few seconds afterwards my vision goes quite blurry for a while,” she said.

“I was doing squats in training the other week and nearly had a bad mishap when I made a mistake with my technique and was stuck with 277.5 kg on my shoulders and couldn’t get back up to the standing position.”

McCullum got hooked on powerlifting six years ago and hasn’t looked back since.

“I love the buzz of lifting there are plenty of highs but of course there are also the lows when you have to manage injuries but overall, I just love it,” she said.

Powerlifting is not a mainstream lucrative sport in Australia so most of McCullum’s competing has been self-funded. She has a number of sponsors that assist with equipment and apparel.