new writers & contributors welcome,
please contact us with your submission
Tasmanian weather
forecasts and warnings
Tasmanian roads –
latest alerts & reports
Donate to Tasmanian Times –
BSB: 807009 Acc: 60178142
Want to have a say?
Send us a letter for publication
no new content for a few days,
site is being migrated 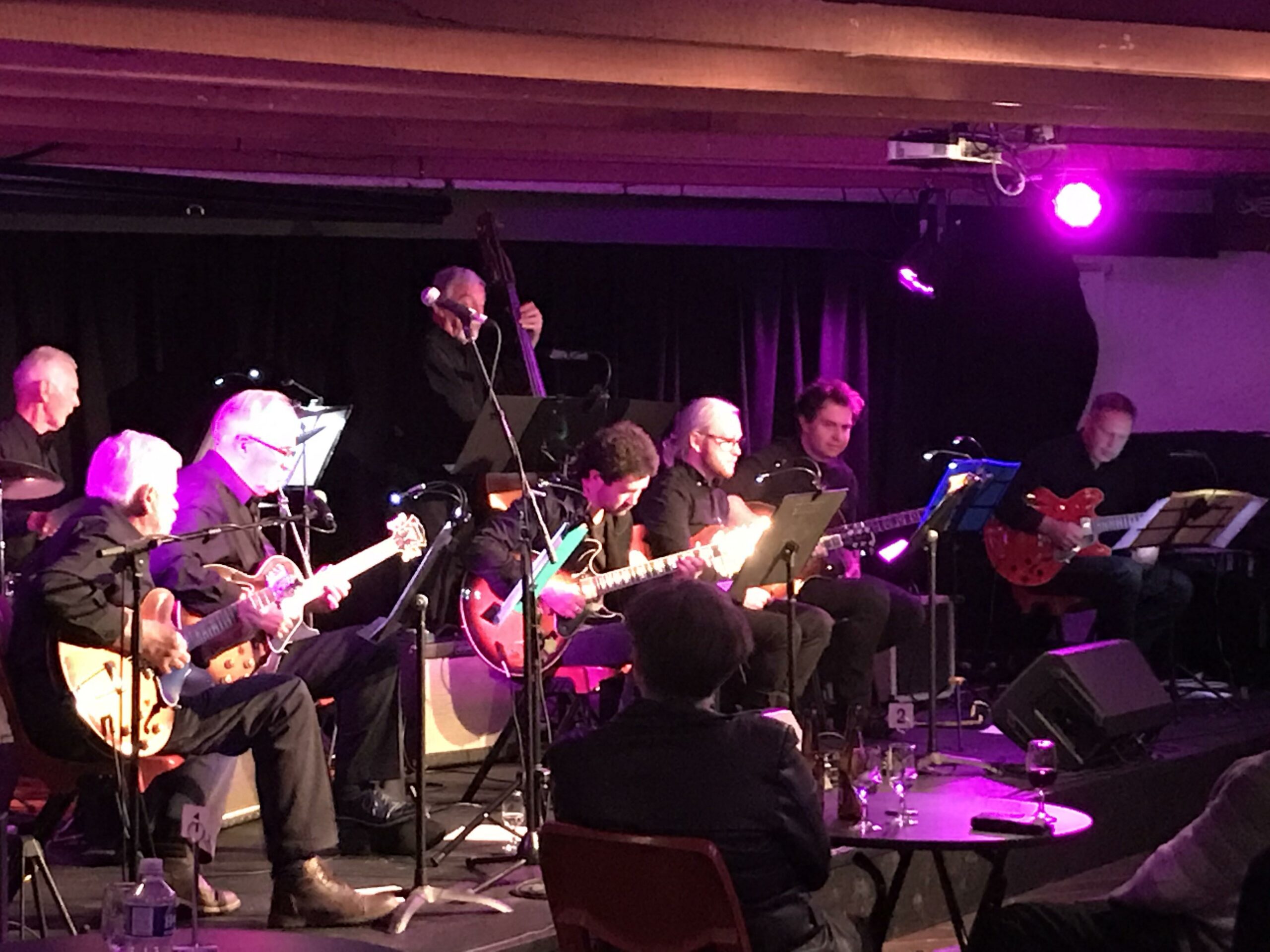 Next month Salamanca Arts Centre will be presenting the second annual Jazzamanca Festival.

The festival will take place at SAC from 5 to 7 November. The inaugural festival was in February-March 2020, just before COVID-19 changed many things for the arts sector.

After the 2020 lockdown finished, SAC have been presenting regular monthly gigs since last September. Organisers say that this has given them “an opportunity to discover the depth and breadth of Tasmanan jazz talent.”

Accordingly, this year’s festival will feature an entirely local line up.

See the full program of the Jazzamanca Festival. 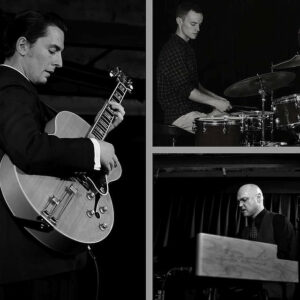 ‘BACK IN THE CHICKEN SHACK’ with THE RANDALL MUIR HAMMOND TRIO

The Randall Muir Trio (aka Rattattat) performs mainly Hammond jazz and Hard Bop from the peak creative decade of last century. The Trio has a strong Jimmy Smith influence obviously, but also draws from many of the players who follow him, namely Jimmy McGriff, Jack McDuff, Shirley Scott and the recently passed Lonnie Smith, to mention a few.
The Randall Muir Hammond Trio features Hobart guitar virtuoso Aaron Entresz and Tom Robb on drumkit.

‘MINGUS AND MORE’ with the NICK NUGENT OCTET

Inspired by the writing of Charles Mingus and following almost a decade of planning, composing, and arranging, Nick has gathered some of the finest musicians from across Tasmania to form the Nugent Octet; presenting a concert of Mingus arrangements and raw, new compositions inspired by – and in tribute to – “the angry man of Jazz”.

‘BLOWIN’ THE BLUES AWAY’ with the KONRAD PARK QUARTET

The Konrad Park Quartet embraces the legacy of John Coltrane, and this new quartet line-up features Kelly Ottaway, Al Dobson and Hamish Houston, who all share a common desire to perform and revel in the power of this music. Modern Jazz has always had roots in the blues, from haunting ballads to fast and ferocious up tempo expeditions of sound. Embrace the hurricane, blow away the blues.

‘STEAMING’ with the JAMIE PREGNELL TRIO

Jamie Pregnell is a guitarist and composer based in Hobart, and has been performing extensively within the Tasmanian jazz and improvised music scene for over the past 10 years. Jamie has attended the Banff International Workshop in Jazz and Creative Music in Canada and was awarded an Arts Australia Development Grant to study under Australian jazz great, James Muller. Jamie recorded his latest album ‘Sleepy Town’ in Melbourne 2020, featuring all original compositions alongside Australian jazz greats Julien Wilson, Sam Anning and Ben Vanderwal.

Four of Tasmania’s leading contemporary Jazz musicians team up to pay tribute to The Modern Jazz Quartet; one of the most enduring and versatile Jazz acts of the 20th century. The Hobart Jazz Quartet combines the talents of Kelly Ottaway [vibraphone], Mat Boden [piano], Hamish Houston [bass] – replacing Nick Haywood on this occasion – and drummer Ted Vining. The HJQ will perform the music of John Lewis and his Modern Jazz Quartet (pictured below), a group which formed in the U.S in 1952 and performed over a 40-year span, playing tunes influenced by classical music, cool Jazz, blues and be-bop.

The Konrad Park Quartet embraces the legacy of John Coltrane and this new quartet features Kelly Ottaway, Al Dobson and Hamish Houston, who all share a common desire to perform and revel in the power of this music. Modern jazz has always had roots in the blues, from haunting ballads to fast and ferocious up tempo expeditions of sound. Embrace the hurricane, blow away the blues.

Allan Brown’s guitar ensemble Wirechoir comprises six graduates and ex-teachers from the UTAS Conservatorium of Music, along with bass and drums.

The unconventional line-up performs specialized arrangements that show the diversity of the guitar and performers. The charts are written by Allan Brown, along with quite challenging charts from Ken Wheeler, Mundell Lowe and Fred Hamilton.

This performance is sure to open the eyes and ears of many who may have seen the guitar in more traditional roles. The Wirechoir repertoire spans swing, bebop and blues. 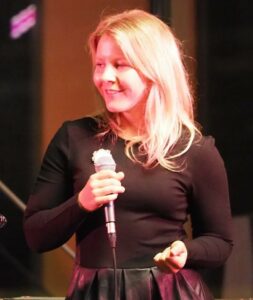 ‘A JAZZ VOICE’ SOPHIE LESLIE with THE RHYTHM SECTION (Matt, Hamish and Ted)

Louise Denson is an accomplished pianist and composer, recently arrived in Hobart after 20 years teaching, writing and performing in Brisbane. She has played in Canada, USA, Europe, UK and across Australia in her own and other’s ensembles and her compositions feature beautiful melodies, rich harmony and happening grooves. Louise has released seven CDs, with her 2021 release, Nova Nova, receiving a 4-star review in The Weekend Australian. Her work in the Jazz and Classical genres has been recorded by both Australian and American artists including multi-Downbeat poll-winning trombonist Bill Watrous, and celebrated Tasmanian vocalist, Elly Hoyt.

Louise’s most recent commission was for the official 250th anniversary commemorations of the landing of Captain James Cook and HMB Endeavour in Cooktown, FN Queensland. Cooktown Cantata is a 60-minute work for three voices and six-piece ensemble, weaving together jazz, classical, folk and latin influences. It was performed in Brisbane and Cooktown in June 2021, to great acclaim.

In the company of Hamish Houston (bs) and Tom Robb (dr), Louise will be playing her original compositions ranging from Bill Evans influenced waltzes to lively choros and sambas. This special performance features the world premiere of several of these works. Don’t miss it!

Steve Brien (guitar/vocal) and Conrad Keeble (piano) open up the Great American Song Book with a nod to the bebop greats, but without a safety net . . . Warning! Do not try this at home.

‘HOMAGE TO SONNY ROLLINS’ with the PHIL BYWATER THREE

Saxophonist, composer and bandleader Phil Bywater was born and raised in Hobart and has recently returned after 30 years in Melbourne. He has toured extensively around Australia and overseas, performing and recording with his own ensembles: the minimalist jazz Fallingwater Trio, world jazz/funk group Phil Bywater’s Buried Treasure, and Fela Kuti tribute Big Fela Afrobeat Orchestra. He has also worked as a long time bandleader with indigenous reggae legend Bart Willoughby, Irish vocalist Camille Sullivan, Deline Briscoe, and played with a host of Australia’s finest jazz, reggae and rock performers including Ted Vining, Bob Sedergreen and Ross Hannaford.

Tonight’s performance is the debut of a new ensemble, featuring national living treasure Ted Vining on drums and local star Hamish Houston on bass, to celebrate the music of saxophone icon Sonny Rollins. Bywater says “To play Sonny Rollins’ music is such an honour, one of the greatest ever saxophone players, who has such a beautiful melodic sense, such rhythmic energy and such a rich sense of humour!”

Swingmatism (as the name implies) aims to bring a touch of mystery to this performance of diverse repertoire. The musicians are Ken Schroder (baritone sax and clarinet), Aaron Entresz (guitar), Isaac Gee (double bass) and Eric Johnstone (drums).

The repertoire ranges from Schroder originals to Ellington/Strayhorn tunes, Django Reinhardt music via bebop, wet coast jazz (contrapuntal “chamber” jazz), songs from the American songbook and some Blue Note classics. We like to play “gems of jazz”, music that deserves to be played for your enjoyment, songs with different rhythms and different moods. Looking forward to seeing you at the gig. 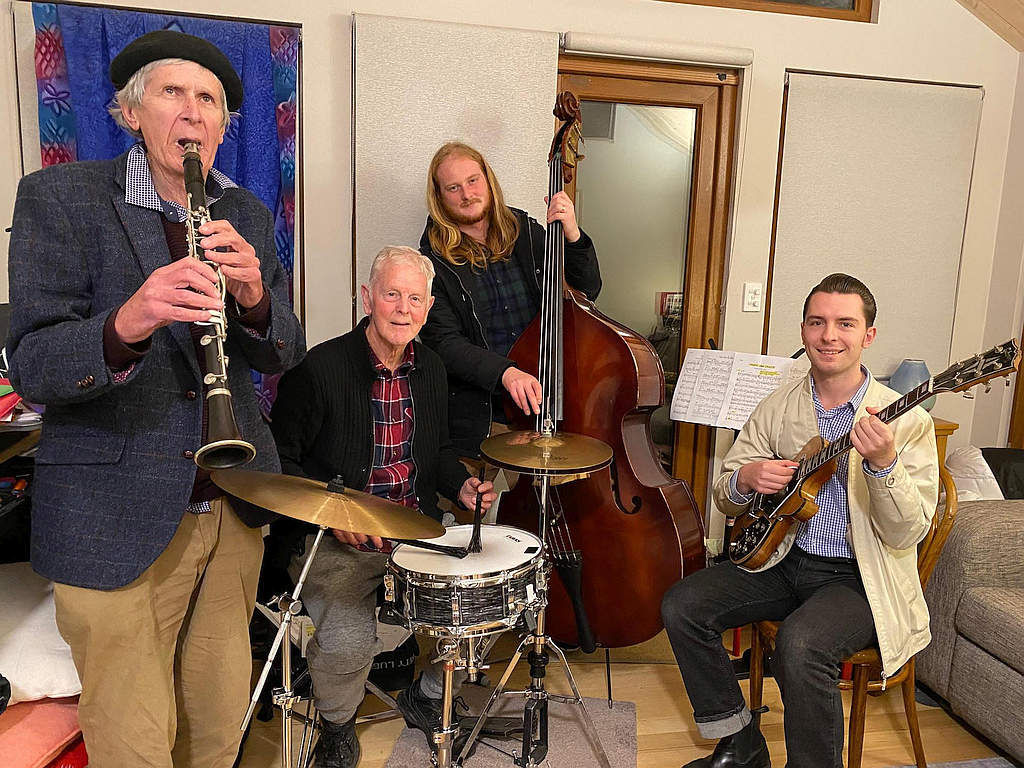