no new content for a few days,
site is being migrated
Want to have a say?
Send us a letter for publication
Donate to Tasmanian Times –
BSB: 807009 Acc: 60178142
Tasmanian weather
forecasts and warnings
new writers & contributors welcome,
please contact us with your submission
Tasmanian roads –
latest alerts & reports 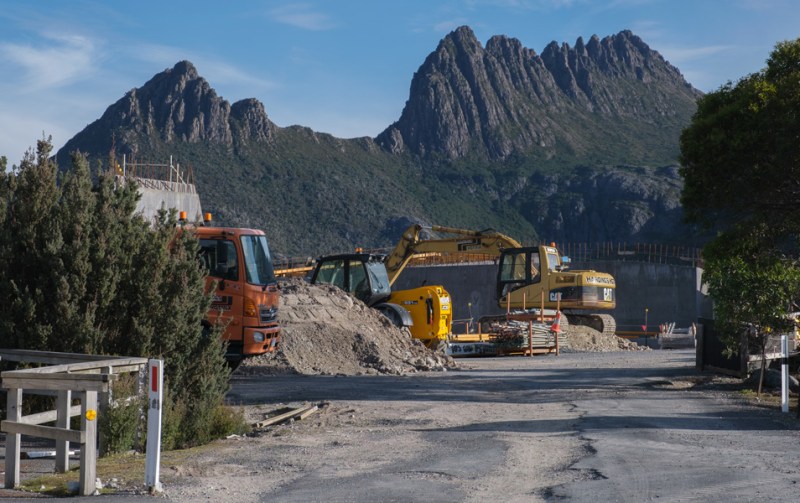 Everybody had thought that the most preposterous aspect of the 2016 Cradle Mountain Master Plan – the cableway from the visitor centre to Dove Lake – had long been forgotten.

Unfortunately the nightmare of another major intrusion into the naturalness of Cradle Valley is turning into reality with the Coordinator General recently announcing it to the annual conference of the Tourism Industry Council of Tasmania as a fait accompli. Any ‘consultation’ will relate to the finer details of the cableway, not to the concept of a cableway or the appropriateness of such a contraption in an overwhelmingly natural area. The cornerstone of WHA management in the past has been full and open consultation, from the beginning.  The proposed consultation – after gaining Cabinet approval – is the complete opposite.  It is not consultation, it is informing people after the event. Note that this is being driven by the Coordinator General, whose main responsibility is for economic development, not by any authority with expertise in national park management.

The cableway was initially proposed in the 2016 Master Plan which was initiated by the tourism industry. It was based on a survey of people with little or no actual experience of Cradle Mountain or the options for access to Dove Lake. The Master Plan did not deserve much credibility but its uncritical endorsement by both major political parties and the Parks & Wildlife Service has already led to the inappropriate and unnecessary viewing shelter on the former Dove Lake carpark (currently under construction; see picture above). The Master Plan has gone unchallenged for far too long but we now have good evidence that the cableway is neither wanted nor needed; a recent visitor survey conducted on behalf of PWS (see below) shows very high levels of satisfaction with both the shuttle bus service and the entire experience of visiting the Cradle Mountain area.

Why then is the state government so keen to proceed? The $30 million promised specifically for the cableway by the federal government in the heat of the 2018 Braddon by-election campaign came with strings attached. It is to be provided through the Community Development Grants Programme which requires the cableway to meet criteria on benefits, viability and sustainability before a decision can be made on providing the funds. The Transportation Study which is supposed to provide this justification has been ‘just a few months away’ for several years. Could it be that the federal government has told the state that it’s time to make its case for the funding or miss out? Could it be that the state government can’t bear the thought of missing out on federal funding, even if it is for a project that is neither wanted nor needed and can only detract from the natural qualities of Tasmania’s greatest national park?

A new shuttle bus terminal was constructed in 2020 as part of the new Visitor Centre and McDermott’s Coaches have invested in a new fleet of buses, specifically for the Cradle shuttle. These investments suggest that the cableway concept had been abandoned, only to resurface recently.

In addition, 87% of respondents reported that their trip to Cradle Mountain (in its entirety) had “met” or “exceeded” their expectations.  The most frequently mentioned explanations for these levels of satisfaction included “beautiful/ good views/ scenery/ nature”.  “Good walks/ walking tracks” were also frequently mentioned.

At their meeting on 19 June 2021, the Friends of Cradle Valley (TNPA is a member) were briefed on this survey by the PWS Regional Manager. A full copy of the report was supplied a few days later (without any caveats) following a request from a member of the Friends group.

At the same briefing it was mentioned that there is scope for increasing the capacity of the shuttle bus service if this is considered desirable. The construction of three additional passing bays on the road (a minimal impact) would allow several additional buses to operate simultaneously.

The Visitor Survey found high levels of satisfaction with the current shuttle bus service and the opportunities to experience walks and the beauty, environment, nature and scenery of the national park.

This demonstrates the need for any proposal for Cradle Mountain to consider the experience to be provided for visitors. Most visitors want the opportunity to experience wild nature in a relatively uncrowded situation. The massive viewing shelter at Dove Lake (currently under construction) is incompatible with this and the proposed cableway will go further towards turning the experience of visiting one of the world’s great national parks into something more akin to a visit to Disneyland.

The Dove Lake area is already overcrowded at peak times. Future management should consider limiting peak numbers to maintain the experience, not constructing additional intrusive infrastructure to increase the throughput of visitors. Imagine a conga line of people trooping around the Dove Lake track one after the other, much like the line of people and Sherpas climbing Mount Everest…

The World Heritage Committee has recently restated its concerns about tourism development impacting world heritage values and requested that any proposal which may affect the area’s outstanding universal value be referred to the World Heritage Centre.

The opportunity to experience wild nature is a major component of Tasmania’s appeal to visitors. Further development in Cradle Valley will make Tasmania a laughing stock and devalue Tasmania’s ‘brand’. The concept that Cradle needs a gimmick to attract more visitors is fundamentally flawed, as is the notion that the current shuttle bus service needs replacement.