no new content for a few days,
site is being migrated
Donate to Tasmanian Times –
BSB: 807009 Acc: 60178142
Tasmanian weather
forecasts and warnings
Want to have a say?
Send us a letter for publication
new writers & contributors welcome,
please contact us with your submission
Tasmanian roads –
latest alerts & reports 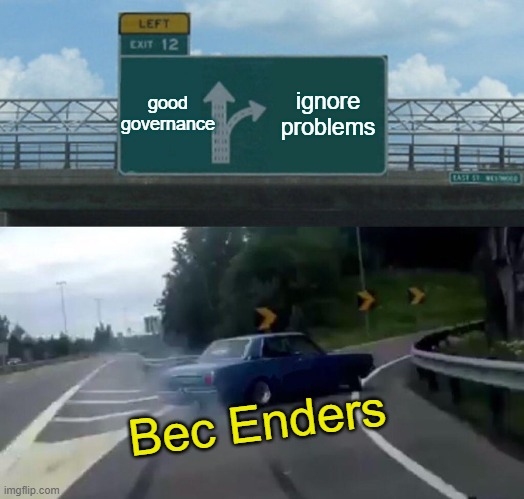 There is still no formal media release or any public comment from the only spokesperson for council, Mayor Bec Enders, following our publication on the leaking of confidential information.

As described in that exclusive, the sensitive breach of candidate information has occurred during the current recruitment process for a new General Manager at the Huon Valley Council (HVC),

Tasmanian Times has asked HVC if there is to be an official media release. There has been no response.

An undisclosed source has advised the mayor is head down and ignoring this breach in the hope it will go away. There is also a suggestion Enders is ignoring our Tasmanian Times article and possibly even attempting to discredit the article. TT has not been contacted by Enders, nor any of the councillors, with any questions over this matter. The breach was an agenda item for general discussion at the general meeting of the Huon Valley Residents and Ratepayers Association (HVRRA) held in the Huon Valley Hub last night. The committee will meet in coming days to determine what, if anything, the association intends to do with what it considers to be a most serious situation.

There have been comments on social media calling for a thorough investigation along with a call to restart the recruitment process. One of the members at the HVRRA meeting referred to the failings over the years of the previous four GM recruitment processes; all of which have been under a cloud, to include the appointment of the previous GM during the reign of the then Administrator, Adriana Taylor.

The local Huon News published a Viewpoint article on page two in their 21 July 2021 edition from Councillor Paul Gibson:

I was dumbfounded to read last Friday, that there had been a leak to the Tasmanian Times of the applicant details for the general manager position for our council. The selection of the general manager was to be a firewalled process, carried out by a committee of four councillors with a consultant.

The general manager is the only employee of council chosen by the elected councillors who represent you. This is where the community can choose someone for the pivotal role that determines the culture of our council.

We are not after someone who appears to be a ‘good bloke’. We want a highly skilled and experienced person who will reinforce an excellent workplace culture. We want the whole community to be confident that the council is fair, transparent and working hard to follow the directions set by the community.

Residents must have complete confidence that there is a level playing field when it comes to council services, actions, and decisions. It is critical our council is open and transparent. There are very few items for discussion that are too sensitive to be in the public domain.

Other than these, every effort should be made to give information freely. Honesty and openness demonstrate that council has confidence that it is doing the best it can for the broader community.

In the Huon Valley, where there is a deficit of jobs, the council is a large and generous employer. Residents must be confident that their rates contribution is being efficiently used to provide excellent and appropriate services.

As the world and our valley changes, so do the needs of our community. Councillors have an obligation to set an agenda to address the current goals of the whole community and to direct council to be in the best possible position to achieve them into the future. COVID, climate change, mental health and the housing crisis are some of the new issues affecting us. When the council culture sticks to these core principles it builds mutual trust, participation, community cohesion and resilience.

In the time I have been actively engaging with our council, there has been steady improvement on all counts. However, it takes a strong leader as general manager to banish all habits of engineering outcomes, backroom deals and to lock in a squeaky-clean culture; the sort of council we can all be proud of.

I called for a special council meeting, held on July 2, to emphasise that the process to select the general manager must be driven by all councillors with absolutely no staff involvement. This is a small community where people know each other, which makes it extremely important that all councillors and all staff are alert to even the hint of the possibility of being influenced.

The fact that the applicants’ information is circulating in part of the community tells me that something is very wrong. It appears someone is trying to engineer an outcome instead of following this process. I feel we have no choice when such a breach is made in an appointment process that directly concerns our community.

To ensure that we select the right applicant we must pause the process until the leak is investigated and if necessary to start the process from scratch. I am upset that this issue brings the integrity of our council into question and I emphasise that it is not the fault of our wonderful staff.

Geoffrey Swan is a resident and ratepayer in the Huon Valley. Since 2015 he has regularly attended ordinary meetings of council and has actively participated in public question time. He is an investigative journalist with an interest in good governance, proper process and accountability.