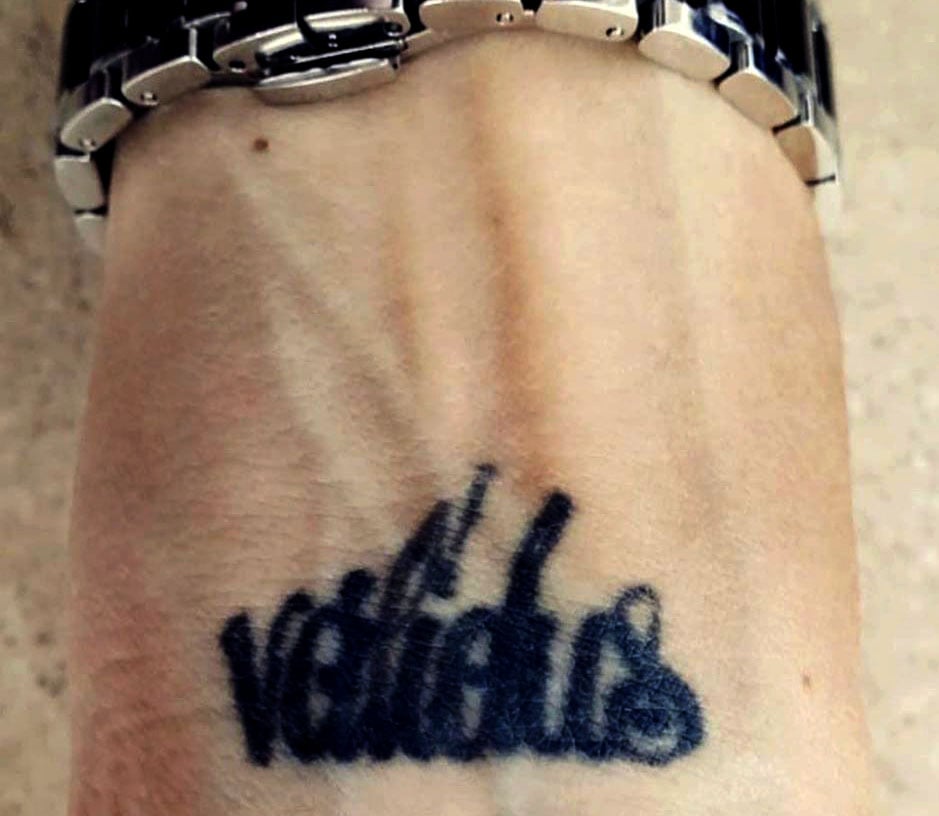 I was 16, not long out of high school. A friend, Tash, who I hadn’t caught up with for a time invited me to a party and I was excited to go. The party was at a decrepit little house off a track along the road to Lonnavale in the Huon Valley.

We got a ride out with a mate of hers who drove in such a fashion that it terrified me and made me want to ditch out, looking back now I wish I had at that point and yet … if I had asked to be let out and not gone to the party would someone less strong than me have become my story?

There were a few people I knew at the party. An ex-boyfriend tried to get me to leave with him, and again … if only?

I was drinking Jim Beam and Coke. I’d noticed a guy a little older than me had been staring at me throughout the evening but I didn’t engage. I wasn’t a very seasoned drinker, I was taking it easy, or so I thought. All evening I had left my Beam and Coke bottle on the table and would go back for refills when I needed them.

At one point I was talking to someone and I realised Tash wasn’t nearby anymore. I tried to find her only to discover that she and the people who had ferried us to the party had left. The house didn’t have a phone and it was before everyone having a mobile.

I tucked back inside hoping they’d come back.

I had the rest of my drink and poured myself a Coke. Now, as an adult, I can tell plain Coke versus Coke and Beam … but the slightly tipsy younger me was far less savvy.

The fellow who had been staring at me earlier was now leering rather oddly at me. I was feeling really uncomfortable. I went outside to try to figure out what to do and how to get out of the place.

That was the moment when I felt the full weight of my last two nervously fast drinks hit me. I suddenly felt proper drunk and took myself for a walk out into the open paddock beside the house where I decided I would lie down and wait it out until the morning. I thought I was safely away from the house of strangers.

Lying on my back staring at the swirling stars I was so confused as to why I felt so out of control when I’d been so conscious of my alcohol intake. I remember looking back toward the house for a while and watching all the people not too far away still chatting, laughing and drinking. I think I drifted off. At some point I awoke, aware of two male voices talking very close by. They were urinating side by side only metres from where I lay. One guy fist bumped the other and then left.

That was when I up close got to meet the guy who raped me. 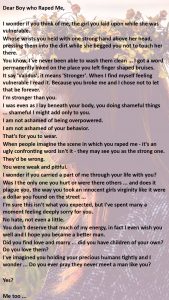 During *my rape he laughed and told me that all night he’d been adding alcohol to my bottle of Coke, so effectively spiking the drink of a ‘pretty’ young girl uneducated in alcohol. (*Now, I could say ‘the rape’ but I feel language around these things is important. ‘The rape’ makes it feel generic and ‘my rape’ owns the situation. It was me. I was raped. My rape.)

And the clincher; this guy and his fist bump mate bundled my hungover, confused self into the back of their vehicle in the early hours of the morning. On the way past the property I was staying they dropped me at the entrance. They acted like they were my valiant rescuers giving me a ride home … not like they’d both been part of something that would affect me in so many ways for the rest of my life.

I remember walking into my house and being so confused about what I’d experienced and so unsure if it was actually my fault. I sat in the bottom of the shower ‘till the water went cold and then I spent the rest of the day in bed.

Did I tell anyone?

No. I wasn’t yet a survivor, I was in victim mode – which is where a rapist wants you to be, because usually this is where you wear their shame, their silence of the event and essentially through saying nothing we protect them, and allow them to move on while we stay trapped.

Katrina is today living in the Huon Valley and is very happily married with two children and always a dog. Later this year she will celebrate twenty wonderful years with her husband, a man who she absolutely adores in every possible way.

As a little girl her mother read to her all the time and fostered a love of books and words. Katrina would devour anything she could get her hands on.

“I’ve always felt it difficult to stay present in the real world when there are always so many words floating around in my head trying to get out.

Writing is therapeutic to me. I’m a very emotive person by nature. I can see a colour, a smell, a scene and ‘feel’ it too.

Writing is a place I can pour out all of the emotion I pick up throughout my days,” said Katrina.

“We know that our service sees on average 900 people a year and this is just in the south of Tasmania.  Tasmanian police statistics show that just over 100 people report sexual violence state-wide per year.  So based on these figures alone we can see that there are far more people seeking counselling than wanting to report and enter the justice system. In fact, many of those who seek support from our service do so many years after the abuse has ended.

Each and every story of survival following sexual violence is a story of courage, resilience and survival.”

“We assisted 628 new clients during the 2018-2019 period across the north of Tasmania. These figures do not include any group work nor do they include existing clients who may have been involved with our service over multiple years. On average, those clients see our counselors for approximately 14 months 2 times per month.” 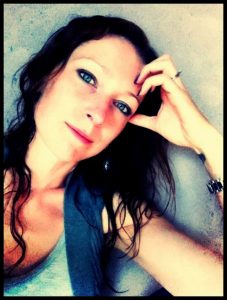 KATRINA FROM @ONPAPERIBLEED  on Facebook and Instagram. Writer. Human. Habitual breath taker. Vegan. Reproducer. Lover. She is fire and silk.