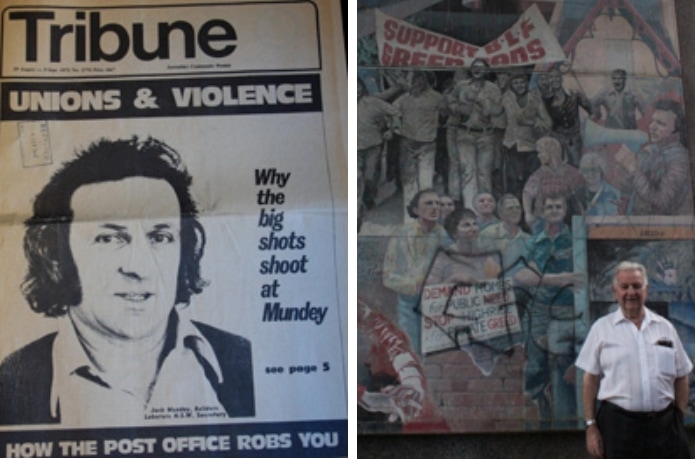 Our cities owe much of their surviving heritage to Jack Mundey

Jack Mundey, who has died at the age of 90, was a pioneer of the Australian heritage movement. As well as contributing to labor and environmental politics, Mundey reconceived of the ways that Australians related to their cities and heritage places.

As the NSW Builders’ Labourers Federation (BLF) secretary, Mundey created the ‘green ban’ (a term first used in 1973). No union member would work on a site subject to a green ban.

These bans were placed to give communities a say in development and to protect heritage and the environment. At a time of historically high union membership in the construction industry, a green ban effectively prevented development from proceeding.

By painting the traditional union ‘black ban’ in a new colour, Mundey and the BLF created a new conception of urban and labor politics which highlighted community heritage concerns. As Mundey explained:

The adjective ‘green’ was more apt than ‘black’. It also explained our wish to extend our help to other citizens, not to unionists alone. 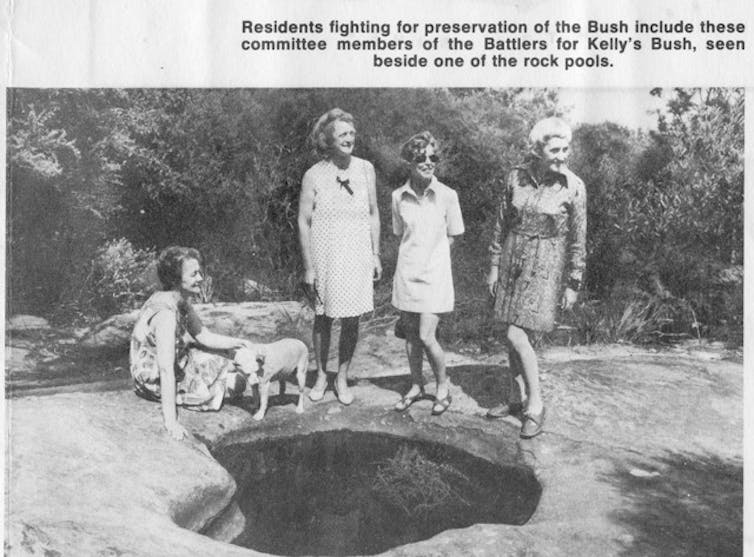 The first green ban was applied in Sydney at Hunter’s Hill in 1971. A group of women founded Battlers for Kelly’s Bush to campaign against a proposed housing development by Melbourne firm A.V. Jennings. The housing estate was to be built on the Parramatta River at Kelly’s Bush, the last undeveloped open space in the area.

It was a typical housing project in this era of suburban expansion. But the rise of resident and civic groups fighting for heritage across Australia shifted the development terrain.

The Hunter’s Hill residents heard Mundey’s claim that workers “had a right to express an opinion on social questions relating to the building industry”. After a meeting between Mundey and the Battlers, a green ban was applied, eventually foiling the development. Kelly’s Bush was saved.

It did not matter that Hunter’s Hill was a solidly middle-class suburb. The green bans would be instituted on behalf of a range of communities.

A time of public revolt

Australian cities underwent dramatic change in the postwar period. Funded by a long economic boom, it was the era of modernist architecture and planning. Many parts of cities would be redeveloped following wholesale demolition. 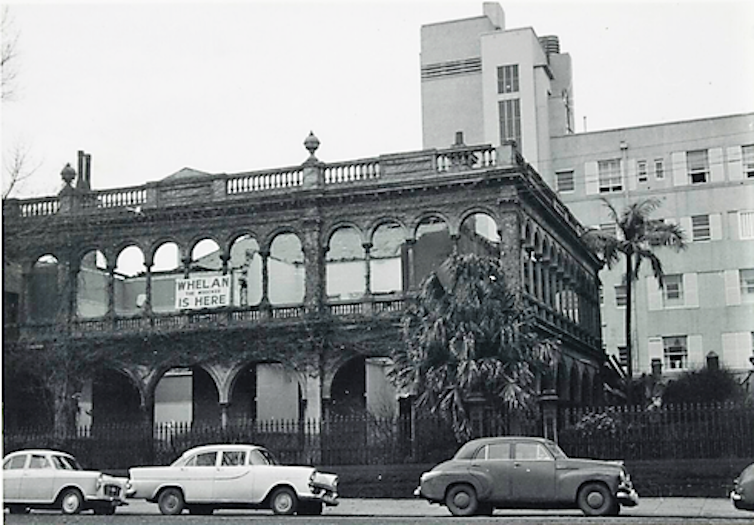 Although goals of postwar urban planning for the welfare state included housing for all, full employment and exciting new environments, sizeable cracks in the vision were appearing in the 1960s. Planners and architects were increasingly criticised for being technocratic and adopting overly scientific and rationalised modes for urban design and development.

Their efforts were too often disconnected from communities and needlessly destroyed historic and natural environments. Widespread demolitions of commercial and public buildings in Australian CBDs and of terrace and free-standing homes in the inner suburbs were increasingly seen as unacceptable by the community.

More broadly, the late 1960s and early 1970s was a dramatic time for Australian social movements. Second-wave feminists, anti-Vietnam war protesters and historic and environmental conservationists rubbed shoulders during street marches. The federal Liberal Party had been in power for two decades and there was a great deal of energy among progressives for change.

The Australian heritage movement was gaining momentum. National Trusts had been active in designating heritage places from the late 1940s. By the late 1960s, thousands of historic places were identified by National Trust classifications, metropolitan planning schemes and sympathetic governments and property owners.

However, a new generation of heritage activists had come to see the Australian National Trusts as narrow in their architectural interests, tame in their advocacy methods, and led by a coterie of elites. Green bans were seen as a more effective means of safeguarding heritage and were swiftly expanded from Hunter’s Hill. 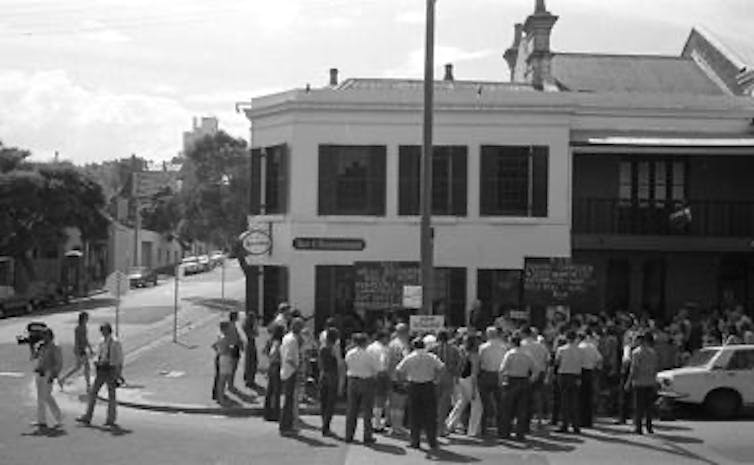 Mundey and his fellow unionists Joe Owens and Bob Pringle, as part of the broader green ban movement, engaged with the ten inner-suburban Melbourne resident groups that comprised the Committee for Urban Action, established in 1970, and the 40 such groups that in 1971 had formed the Coalition of Resident Action Groups in Sydney. From Woolloomooloo and Pott’s Point to Fitzroy and Collingwood, residents took to the streets to protest comprehensive urban renewal and freeway construction plans.

Unions backed these citizen movements by placing green bans on these neighbourhoods. The green bans extended across Australia’s historic suburbs into the CBDs.

Perth’s Palace Hotel and The Mansions in Brisbane were subject to these efforts. In Sydney, Mundey was arrested during protests at The Rocks. In Melbourne, the City Baths, Mac’s Hotel, Victoria Market, Gothic Bank, Regent Theatre, Windsor Hotel, Princess Theatre, Collins Street and the Rialto precinct, and Tasma Terrace all received the attention of the union movement. (The Victorian National Trust would find a new home at Tasma Terrace despite the Australian National Trust movement’s reticence about supporting the radical green bans.)

Heritage laws come into being

The election of the Whitlam Government in 1973, a soon-to-be-declining economy and expanded heritage laws marked the beginning of the end for the green bans. Whitlam had been elected on a platform of protecting the national estate, incorporating built and natural heritage. These policies included curtailing urban development impacts on historic areas as well as maintaining green belts.

Whitlam’s minister for cities, Sydneysider Tom Uren, supported the green bans. He wanted Mundey to join the Inquiry into the National Estate, but the NSW Askin government refused to support the inquiry if Mundey was involved. The federal government’s National Estate Report (1974) nevertheless recorded:

Is it any wonder that ‘green bans’ and other forms of direct action are not being resorted to more and more frequently.

Governments must act to meet these demands, and act decisively, for they have delayed too long already.

The green bans were part of a decisive shift in Australian urbanism. Conservation became a mainstream planning, architectural and policy concern. The federal government passed heritage legislation in 1975, followed by every state over the next 16 years or so. Victoria was first in 1974.

The green bans remained in place as the urban development pipeline collapsed amid the economic shocks of the mid-1970s oil crisis. By the time construction picked up in the 1980s, tens of thousands of heritage places had potential statutory protections. A new specialist industry of conservation architects, planners and policymakers had emerged from the ranks of heritage activists.

Mundey’s tenure as BLF secretary ended in 1974. He continued to shape urban environmental politics as a City of Sydney councillor in the 1980s and by advocating for conservation at sites such as the Sydney Opera House, the Sirius Building and the Bondi Pavilion. He also inspired German Greens founder Petra Kelly.

Green bans symbolised the democratic spirit of the 1970s Australian heritage movement. Countless places survived the closing moments of modernist urbanism because of them. The Australian heritage industry was built on the foundations of radical union activism.

For these reasons, there are often calls to re-apply green bans today. But the changed structure of cities, the economy and unionism make this unlikely. At a remarkable historic moment, Mundey’s green bans empowered people to claim their right to the heritage of their city.