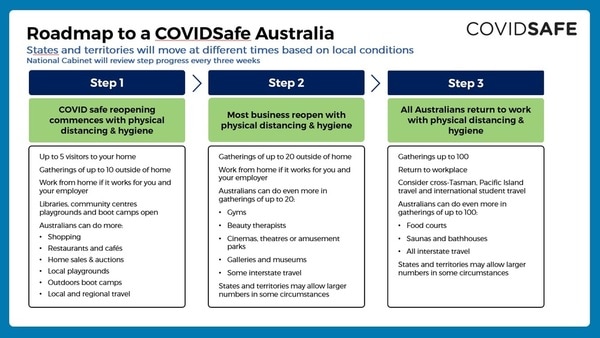 The federal government has announced a 3-step plan for the easing of restrictions. “It is our goal to move through all of these steps to achieve a COVID safe economy in July of this year,” said PM Scott Morrison

“We’ve got to get out from under the doona sometime,” he urged. “If not now, when?”

Step 1 -restaurants and cafes will be allowed to reopen under the first stage of eased coronavirus restrictions. Libraries, community centres, playgrounds and boot camps will also be allowed to open, and people will be able to undertake local and regional travel. Up to five visitors at home, ten in business places.

Step 3 – foresees gatherings up to 100 people. Interstate travel will likely resume. Pubs and clubs with some restrictions will be open. And also possibly gaming venues.

“Step three, but also step two, will get greater definition as we move through the success of step one,” said the PM. 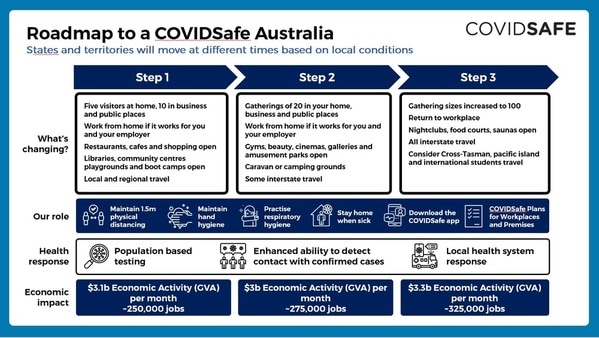 “Not everything will go to plan.”

The PM said he could not envisage a restart date for international travel.

On state borders, he said “On they have never been part of the national baselines. “That has never been a recommendation. They have been decisions that have been taken unilaterally by those states. I’m not making judgements about them one way or the other.”

Chief Medical Officer Brendan Murphy said, “Step one is cautious. It’s gentle. It’s not doing too much at once. Because we’re in uncharted territory. There’s not many countries in the world like Australia that’s in a position to start gently relaxing measures with such low case numbers.”

Hreminded people that the coronavirus was very infectious, and Australia had seen 35 people infected from a single wedding.

“The important thing is not the size of the outbreak, the important thing is the response,” Murphy stated. “And the response is testing everybody, every contact, locking the place down, closing it down, quarantining and isolating.”
Physical distancing and hygiene will remain important through the three phases, as will contact tracing.
The Tasmanian Premier will outline the roadmap for Tasmania from 3.30pm Friday afternoon. 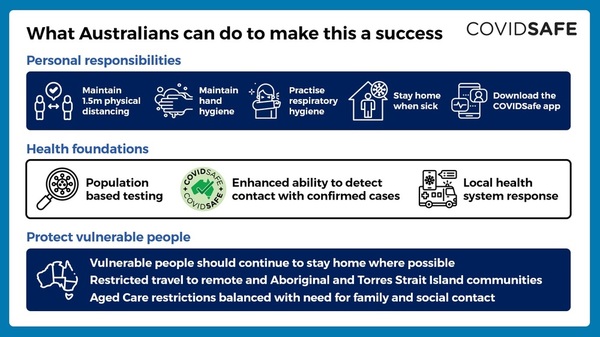