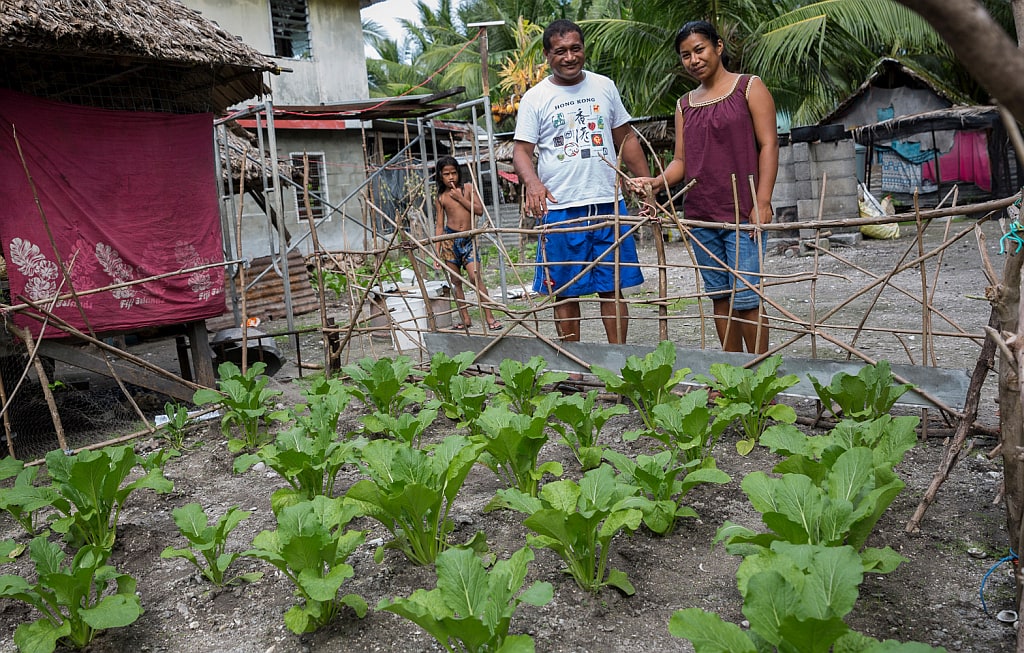 Researcher Geoff Dean’s new recipe combines a sprinkling of ground-up rust, ash from coconut shells, a spread of seaweed and a select variety of green leaves. These ingredients would not be ideal for a dinner party but is great for composting in Pacific island countries, where they are easily found and provide a much-needed nutrient boost to sandy soils.

“We’re feeding the soil, which feeds the plant, which feeds people,” says Mr Dean, a researcher at the University of Tasmania who leads a component of the ACIAR-funded project ‘Improving soil health, agricultural productivity and food security on atolls’.

The project has been operating on the atolls of Kiribati and Tuvalu since 2016 with the long-term goal of reducing skyrocketing rates of non-communicable diseases (NCDs). According to a major 2014 World Bank report, up to 75% of deaths in Pacific island countries are due to NCDs, such as heart attacks and diabetes. This is the result of reduced exercise coupled with a diet of imported low-nutrient food that is high in both sugar and starch.

Mr Dean and his colleagues from the Pacific Community (SPC), the University of Adelaide and local departments of agriculture are tackling the massive NCD problem from the ground up, starting with the soil to ensure people have access to more nutritious food.

Challenges abound. Atoll soils are formed almost entirely from coral so are low in most nutrients, particularly potassium, iron, manganese and copper. Because the soils are coarse-textured, water flows straight through them. The soil is also often salty and highly alkaline (having a high pH). Droughts are common in the area. And, to top it all off, inorganic fertilisers are often prohibited on these atolls as they have the potential to pollute valuable underground fresh water.

To improve soil health, Mr Dean and his colleagues are promoting targeted composting, which he describes as ‘adding a little science to general composting’. Instead of just combining whatever’s available, the researchers first conduct tests to identify nutrient deficiencies in the soil. Then they look for local, readily available materials that contain those same nutrients to improve the make-up of the compost.

With nutrient deficiencies common in these soils, composting for taro production has a long history in Kiribati and Tuvalu. In addition to providing and holding necessary plant nutrients, compost can buffer against drought, salinity and high soil pH.

However, there’s scope to improve local methods of composting. Ideally, animal manure would be included to add essential nutrients, but this is problematic as there are limited numbers of pigs and chickens on most atolls. And even when there are enough livestock they still need to be housed in a pen with a floor—a luxury in Pacific island countries, given that many human homes in the outer islands don’t yet have concrete floors—to prevent the manure and urine being leached out through the soil. Mr Dean is now looking into using brown leaves as a base in pens to act as a sponge for nutrients, with these leaves to be used subsequently in compost-making.

The researchers have found that some trees and hedges produce leaves that are rich in the very nutrients the soil is lacking.

Seaweed can be an excellent source of the macronutrient potassium (which is often lacking in atoll soils), making it a useful ingredient in a new compost recipe that can improve both soil health and the nutrient status of the foods it produces.

Some species of seaweed are also high in potassium. At the same time, locally available materials such as rusty nails appear to be a source of iron. Fish waste from local processing factories and council green waste also have the potential to be used in upscaling compost production. And, in Tuvalu’s capital, Funafuti, where more pigs are kept, there is scope to develop improved dietary rations which will in turn produce a better quality of manure for composting.

Mr Dean and his team have created targeted composting guidelines to share with local communities. In these, one key feature is balance. For instance, there are limits to the amount of ash that can be used as a source of potassium because ash brings with it high levels of chloride, sodium and magnesium.

Education is critically needed. “Like many people, Pacific islanders commonly are not fully aware of the value of nutritionally rich leafy plants,” says Mr Dean. “Many plants of high value are grown as ornamentals or animal feed but there is a lack of awareness of their benefit for better compost production and human health.”

Pacific island countries are open to change. Kabuati Nakabuta, a senior agriculture officer at the Kiribati Ministry of Environment, Lands and Agriculture Developments and the research counterpart on the project, says, “Interest in producing healthy vegetables in Kiribati is medium-to-high.” He says the compost recipes coming out of the ACIAR project will help mobilise communities to act and “make a huge difference in their home gardens.”