Zach had just returned home from his weekly trip to get groceries. Well, to get most of what he thought he needed except pasta and flour, the empty shelves grimacing at him yet again.

He pushed his glasses up his nose as he turned the key in the front door, then blushed as he became aware of the action.

Get another cloth. Unpack groceries on to kitchen bench. Spray and wipe all groceries and put them away. Wash the vegetables in a light bleach solution and leave them on a tea towel to dry. Wipe down kitchen bench, put cloth in laundry basket.

tie me thylacine down…

Some people might have sighed, but Zach liked routines. A thirty-something accountant who dreamed of nothing more than a new calculator, he felt consistency was comforting. The same thing over and over was an old blanket to use, love, put away and use again.

He sat on the couch, playing with his phone. He’d left it behind when he went shopping so he didn’t touch it. He flicked through the news but there was only one story. A plague that no-one had heard of three months ago was hardly same old same old, but there every days news was just yesterday’s with slightly different numbers, or new countries climbing the hockey-stick graph of doom.

Zach didn’t mind though. He loved numbers, and the pandemic as much as anything produced them: new country case totals, rates of increase, new deaths, recovered cases, mortality rates, and so on. He looked at the virus numbers of almost every country in the world on a daily basis.

That was some mental gymnastic effort though. Far away, as the wide-awake dying gasped into their respirators, they teetered on the edge of becoming another statistic. Mostly nameless.

He had a hard choice to make about whether to use his last packet of pasta spirals, which he was craving, or make something with rice. He was flush with rice after being able to score a ten kilogram bag of Thai jasmine rice from one of the suburban ethnic supermarkets.

Rice or pasta? Visit the living room or the study? Work from home in my new pyjamas or my old ones? These were the increasingly narrow choices he had in front of him just like everyone else.

He decided to make a stir fry with a packet of frozen vegetables and a packet of spice mix. And rice.

He ate slowly while watching a television series about a Russian agent.

About half way through the third episode of the session, he realised he had been binge watching it for three nights and still didn’t really understand or care what was going on.

Zach shoved his plates in the sink, happy at least on that score he lived alone.

But as he changed and got into bed, and read a few pages of ‘Be The Better Accountant You Never Thought You Could Be’ before realising that too was not engaging him, he came to thudding realisation.

In lockdown you were very, very alone.

Zachary Greene, probably soon-unemployed accountant, was on his own.

It wasn’t the bird-in-gutter noise, nor that spooky shrill which occasionally shimmied down the flue on windy nights.

No, this was a scratching. Claw and metal. Inside the house somewhere.

Zach turned over in bed and hoped it would go away. It might have been easier if he’d in the midst of a vivid dream, and could return to it effortlessly like a favourite holiday hotel. Alas…

It seemed to be coming from the kitchen.

He rolled slowly out of bed and put his tartan slippers on. Last chance, he wished. Still time for you to go away he called silently to the kitchen at the other end of the hallway.

Not much here to steal he thought as he crept down the hallway, conveniently forgetting the extra two bottles of hand sanitiser that had been making him feel guilty since his previous-before-today shopping trip five days ago.

He opened the kitchen door. As he flicked on the light he suddenly remembered he didn’t have anything to defend himself with. And that the better kitchen light was operated by the other switch on the far side of the room

“Whatchoo looking at?” said someone sitting in front of the fridge.

Zach though the accent sounded familiar. But it was too dim to see well, and he was still taken aback by someone being in the house. He found himself unable to move, nor speak.

“You could fucking say hello, seeing as you invited me here,” said the voice.

“Or how about something to eat? This fridge is a bugger to open.” Zach saw a hand go to the door, and it made that sound he’d been hearing. That clawing sound.

That hand was a paw.

“Any chance of a roadkill baby wombat?”

The animal’s mouth opened in a huge, hungry yawn that swallowed the entire room, including Zach’s stare.

“Um, holy roses, you’re a, you’re a…but you’re talking…you’re a…,” stammered Zach, wishing that this was uncomfortableness was indeed a dream, and that he’d forgo the green fields and buttercups.

“You betcha by golly wow I am,” said the animal. “Alberto’s the name. You?”

“Not that hard a question, dicknut. You chanted again and again. You brought me here.”

He paused, and waved a paw dramatically.

“It was written, on the tablets handed down from Frenchman’s Cap, that when the name of the last thylacine is called a thousand times, he shall return.”

“Hello Shit,” said the thylacine. “We need to talk.”

“No, it’s Zachary. Zach. You can call me Zach.” He had a little blood returning to his face, though he was no longer scared. Alberto did not seem aggressive, after all.

“Are you…I thought you were all extinct?”

“Umm, well, I thought the last Tasmanian tiger was Benjamin,” said Zach. “Died in a Hobart zoo in the 1930s.”

Alberto shook his head slowly. “Poor Benny. Nice guy. Prick when he played cards, so they say, but a decent bloke. Nah look, my mum was kidnapped when pregnant, and sold, and ended up in a zoo in Italy. That’s where I was born. I starved myself until I was skinny enough to slip through the bars, then escaped. Rolled in enough mud to pretend to be a dog and stowed away in ships until I could get back here.”

“I heard later Mussolini took her and kept her as a private pet, until she died.” Zach nodded as he took at all in. “Probably died of shame at being fed scraps of cold calzone from the table of a fascist arsehole.”

“Anyway, always thought I had to get to lutruwita. The home I never knew, and yet always knew. Long way but a fella’s gotta back himself. Take it in stages. The stowaway’s journey across the world begins with a single rat, after all. Speaking of which…” He pointed at the fridge with his paw.

“Ah, yes, sorry,” said Zach. He opened the fridge, knowing exactly what was there, but seemingly as if seeing it all for the first time. Deep in his memory he groped for some snippet of trivia about what Tasmanian tigers actually ate, and came up clutching recollections of dozing off in Biology.

They sat for a while in the stillness, Zach breaking some flatbread into pieces and Alberto using them to scoop up the hommus.

“Is this stuff home-made?” the thylacine asked.

“No. I … well … I do like it but sometimes you have to take what you can get,” replied David. The last hommus available in the supermarket had been the 1kg tub. So.

“It’s not bad. For vegetarian food. Jonesing for a fresh bandicoot but. Excellent with the local pepper. I take it you’ve tried it?”

Zach looked away. His days had all seemed a blur recently, like a set of white sheets on a hoist going gently around in the wind. Yet all of a sudden nothing much had become too much. Not even pandemic shock prepares you for a midnight feast with a wisecracking extinct animal in the kitchen.

“I don’t want to bring up the e-word again,” he said carefully, “so I won’t. But…how did you actually get here?”

Alberto looked up from his plate, half-indignant, half-dumbstruck, and still looking for something to glue the halves together.

“How did George Pell get off? I have no fucking idea. One minute I was somewhere, then I was here. And hungry like the dead. That’s about it really.”

“Um, and are you actually alive? I know, look, I was sleeping, but this doesn’t seem like a dream, and -”

“Doesn’t seem that way to me either. I can’t remember where I died. Must have done, I suppose. Just not the sort of thing one wants to remember. I was just somewhere. Then here. It does feel strange, though real. Would be nice to get out and have a look around. Oh yeah, the alive thing. Definitely feels like it used to. Might be a bit rusty but you never forget things like that.”

There was something bugging Zach now. Couldn’t put his finger on it. He glanced at the clock, whose numbers assembled themselves into a digital grin and laughed at him.

“We should go to bed,” he said finally. “Been a long…something.”

He toodled down the hall with Alberto following him, his blunt claws making tiny raindrop souunds on the wooden floor.

Alberto leaped up onto the queen bed and pawed around to make himself comfortable. “Looks like there’s room here, Zachary fancy apple daquiri.”

Suddenly it came to Zach.

“Pell! If you know about Pell, you must know about other things going on. Umm…the economy. No football, that I don’t watch anyway. No art shows. Travel stopped. Pokies closed. Not that I do that either. But lots of things. Coronavirus. Coronavirus everywhere”

“I know what I know from what the shimmer people talk about. It’s…yeah…good point. That’s where I’ve been. With the shimmer people. The new ones arrive in a capsule of light. You know how if you see something really bright, like a firework exploding, and then close your eyes, you can still see the glow? It’s like that. There’s the light, and then they shimmer forever. We shimmer. I shimmer. I was shimmering, and now I’m here. That’s it.”

“Was shimmering. Now am shivering. So get me that fucking blanket you were talking about.”

It was clammy and empty for a moment in that dark, dark world everyone now lived in.

Part 2: Alberto Drops In To Save The World.

Part 3: Alberto Drops In To Save The World. 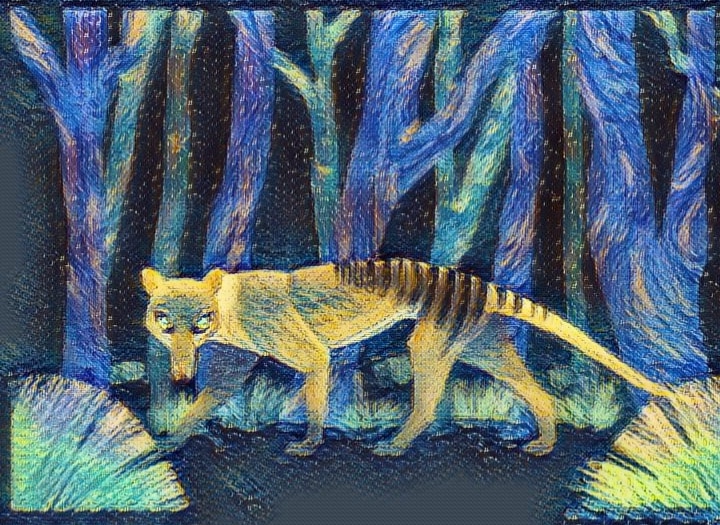