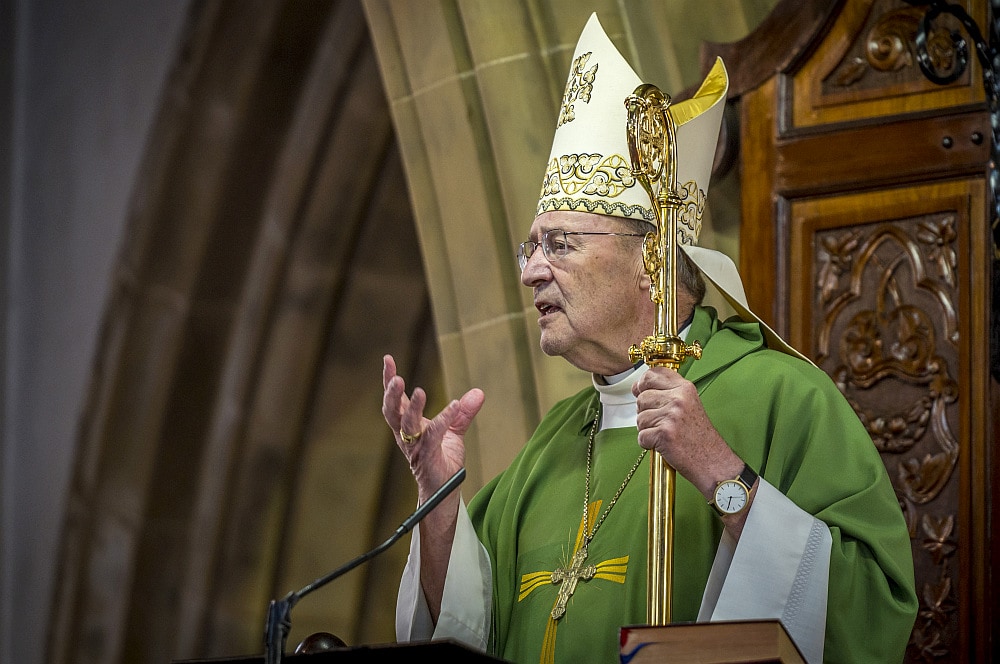 The Catholic Church has made liturgical changes to help prevent the spread of coronavirus.

The changes were communicated by Tasmanian Archbishop Julian Porteous last Thursday for application from this weekend and beyond.

A Church spokesman explained the changes as follows:

“While Tasmania has experienced its first case of coronavirus (COVID-19), health authorities consider Tasmania to be at low risk. However, it is prudent to put a number of precautions in place in our parishes:

“The guidelines align to a communique from the Australian Catholic Bishops Conference (ACBC),” said the spokesperson told TT in response to our enquiries. “It’s a common sense approach designed to protect those in the community who are most vulnerable, and who gather to attend Mass. Our parish priests provided further information during Mass.”

The ACBC may best be described as the ‘peak body’ (to use a secular term) representing the Catholic Church in Australia.

The Archdiocese had previously sent information to parishes about Coronavirus on 31 January. The communique covered practical measures about good health practices and included a communique from the ACBC. At this stage there was no reason to change Liturgical practices, however the Church has since acknowledged that the situation has changed.

The ACBC also informs that “the faithful who are too unwell to attend Sunday Mass – whether due to coronavirus or some other condition – or are at particular risk of contracting the COVID-19 virus can honour their Sunday obligation by participating in a time of prayer within the home, reading the Scriptures or watching Mass on television.”

The Hobart Archdiocese advised that parish priests will be providing further guidance at Mass this weekend.

“We ask that you help protect those in our community who are most vulnerable, by adhering to these precautions when gathering for Mass,” the spokesperson said.

The ACBC statement says Catholics may be reassured that, should they contract COVID-19 and become seriously ill, priests will continue to ensure they receive the sacraments and other appropriate pastoral care.

Reports surfaced in late February of Pope Francis being ill, although the 85-year-old was described as having a simple cold.

On Friday, in agreement with Pope Francis, the Cardinal Vicar of the Diocese of Rome decided to amend an earlier decree closing Rome’s churches. Parish churches, as well as equivalent missionary centres, will now be allowed to remain open, while complying with measures to avoid the spread of the coronavirus.

Italy – which entirely surrounds the Holy See in Vatican City – is the country hardest hit by coronavirus outside China. At the time of writing Italy had 17660 cases including 1266 deaths. Importantly, its case ratio on a per-head-of-population basis is easily the highest in the world and almost double that of second-placed Iran.

In Ireland, Church directions include limiting the size of congregations to fewer than 100 people, and dispensing Irish Catholics from the obligation ‘to physically attend Sunday Mass’. Parishes are advised to inform parishioners of the possibilities “to participate in Mass via local radio and online.”

All schools in Ireland are closed and there are no indoor gatherings of more than 100 persons.

Heeader image: Archbishop Porteous during his homily at the Church of the Apostles in Launceston last month. Image courtesy Rob Burnett.