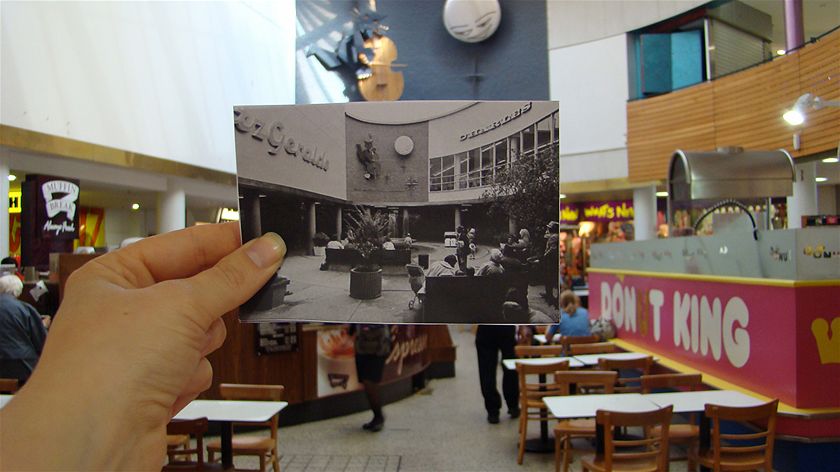 The Cat and Fiddle Arcade, once a seedy back alley, has been the heart of Hobart shopping for over a hundred years.

An inn called the Cat & Fiddle once did a roaring trade down this little side street. In 1862 Cat & Fiddle Alley (now renamed Elizabeth Lane) became the new address for Charles Davis & Semple General Merchants. The inn had long since ceased to operate. The alley once consisted of some 20 houses, stables and a fellmonger’s yards.

A early description of the ‘Alley’:

“In the past it had echoed the echoes of hard-fisted whaling men of a dozen nationalities English solidarity stamped its cobblestones. It knew gentlemen of leisure and let’s admit it, ladies of pleasure. Its attraction was a low roofed ill lit tavern called the Cat and Fiddle”

Today, it has more than 70 speciality stores and is one of the important commercial thoroughfares of Hobart city centre. It was designed in 1958 by Hobart architects Philip Leighton Floyd & Beattie, with a major renovation just a few years ago.

A popular attraction is the clock with its melody played by a glockenspiel and vibraphone. This was recorded in Melbourne and the musicians had to keep playing it again and again, until they took thirty seconds exactly – the time taken by the animated rhyme, with its cat, fiddle, dog, dish, spoon and cow to run its cycle. You can still hear it on the hour during opening times.

Watch the short film below to see the grand opening of the arcade in 1962.

Please be advised that the film may contain words and descriptions that may be culturally sensitive, which reflect the attitude of the period in which the film was produced, and which may be considered inappropriate today.

Click here to find out more about the history of the Cat and Fiddle Arcade including individual shop premises.