The Paddle for Pedder, held Sunday 1 March, was the latest step in the campaign to restore the natural Lake Pedder.

The lake was submerged by the Middle Gordon hydro-electric scheme in 1972.

In intermittent sunshine and against a brisk north-westerly breeze, eleven kayakers paddled from Scotts Peak to regroup over the sunken lake 13 kilometres. The group called for the restoration of the original Lake Pedder and surrounding environs. 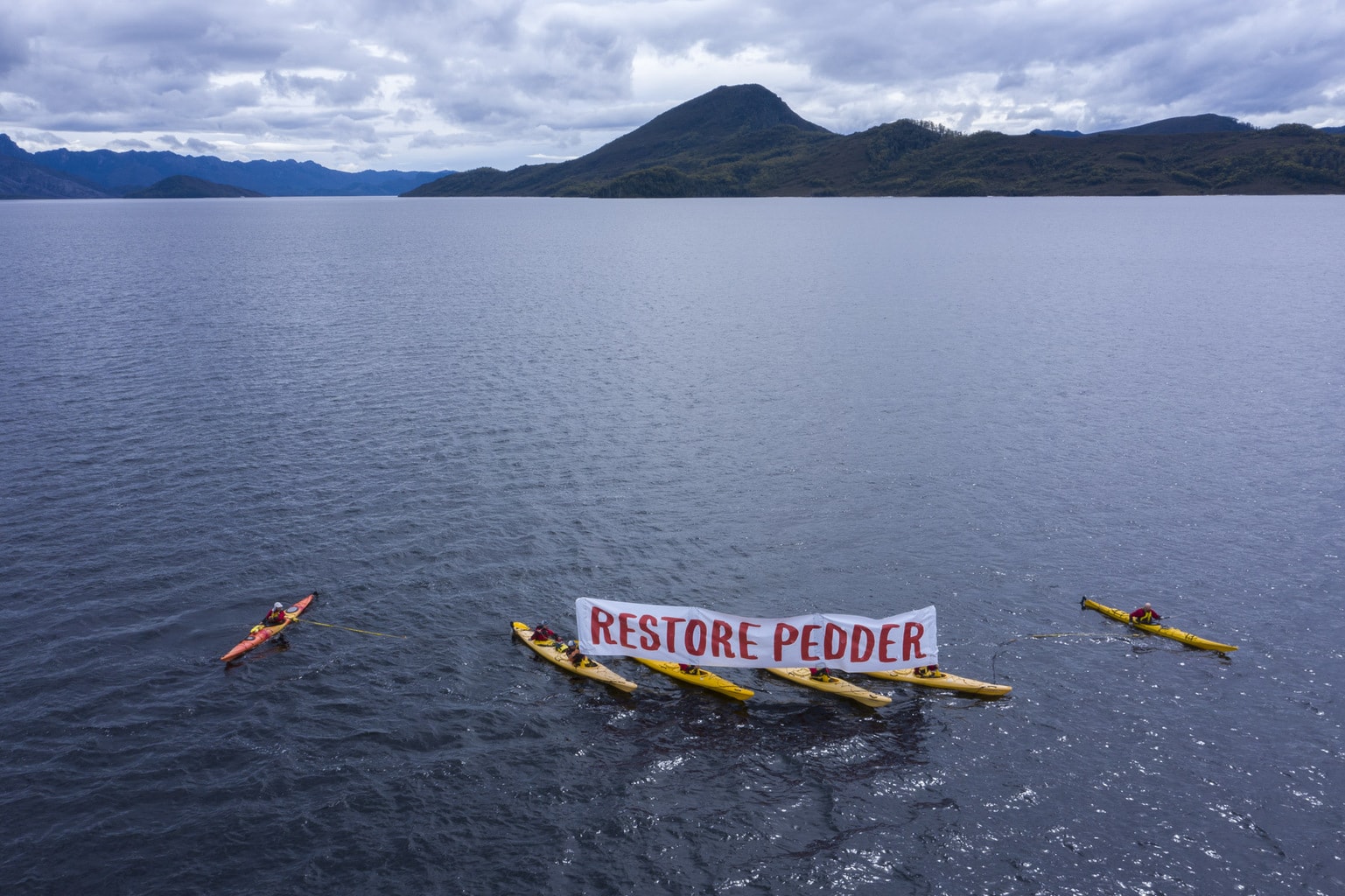 Organised by Tasmanian adventurer Andy Szollosi, the kayakers raised a Restore Pedder banner floating along where the original 1km wide and 3km long beach is submerged.

“We battled some significant headwinds in the morning, and it was looking doubtful that we’d be able to raise our giant sail of a banner from the kayaks,” he said. “After lunch the winds died right down, giving us the perfect weather window for us to hold our banner up over the site of the original lake.”

On the evening before the Paddle, the kayakers came together with more than twenty supporters of the restoration including conservation stalwarts and former politicians Christine Milne and Bob Brown.

“We are in the extraordinary position where it can be restored; it can be and it will be,” said Brown. “This is not a distant dream but a coming reality.” Brown first called for Pedder to be saved as a young doctor living in Liffey.

After seeing the kayakers off from Scotts Peak, the Convenors of the Lake Pedder Restoration Committee, Christine Milne and Todd Dudley, took another group of people walking near Strathgordon in an information session for those wanting to know how restoring the lake is now much more feasible than in earlier times.

“Restoration of Lake Pedder will create world news and attract thousands of visitors, including scientists, as part of the United Nations’ Decade of Ecosystem Restoration, 2021-2030,” Milne told the lakeside gathering.

Restoration ecologist Dr Anita Wild described the stages of recovery at several sites around Strathgordon restored after the Hydro village had been dismantled decades ago.

Visiting United States Eco Health academic James Aronson told the gathering he was enthusiastic about the restoration of the lake and the positive health benefits for the community in seeing the Earth repaired instead of further degraded.

Over the past twelve months, more than four hundred people have donated to the Restore Pedder campaign. The monies fund research to understand the impacts of ecological restoration and ensure species and the environment can thrive in a restored ecosystem, and that the energy from Pedder can be replaced with a renewable source.

“Not only is energy demand in Tasmania falling as major bulk consumers like Temco wind down, we now have the technology to replace any lost energy generation capacity with a renewable source and energy efficiency. And at the same time, we can restore a globally unique ecosystem,” said Milne. “We are thrilled that adventure clothing company Patagonia has become a financial sponsor of the campaign.” 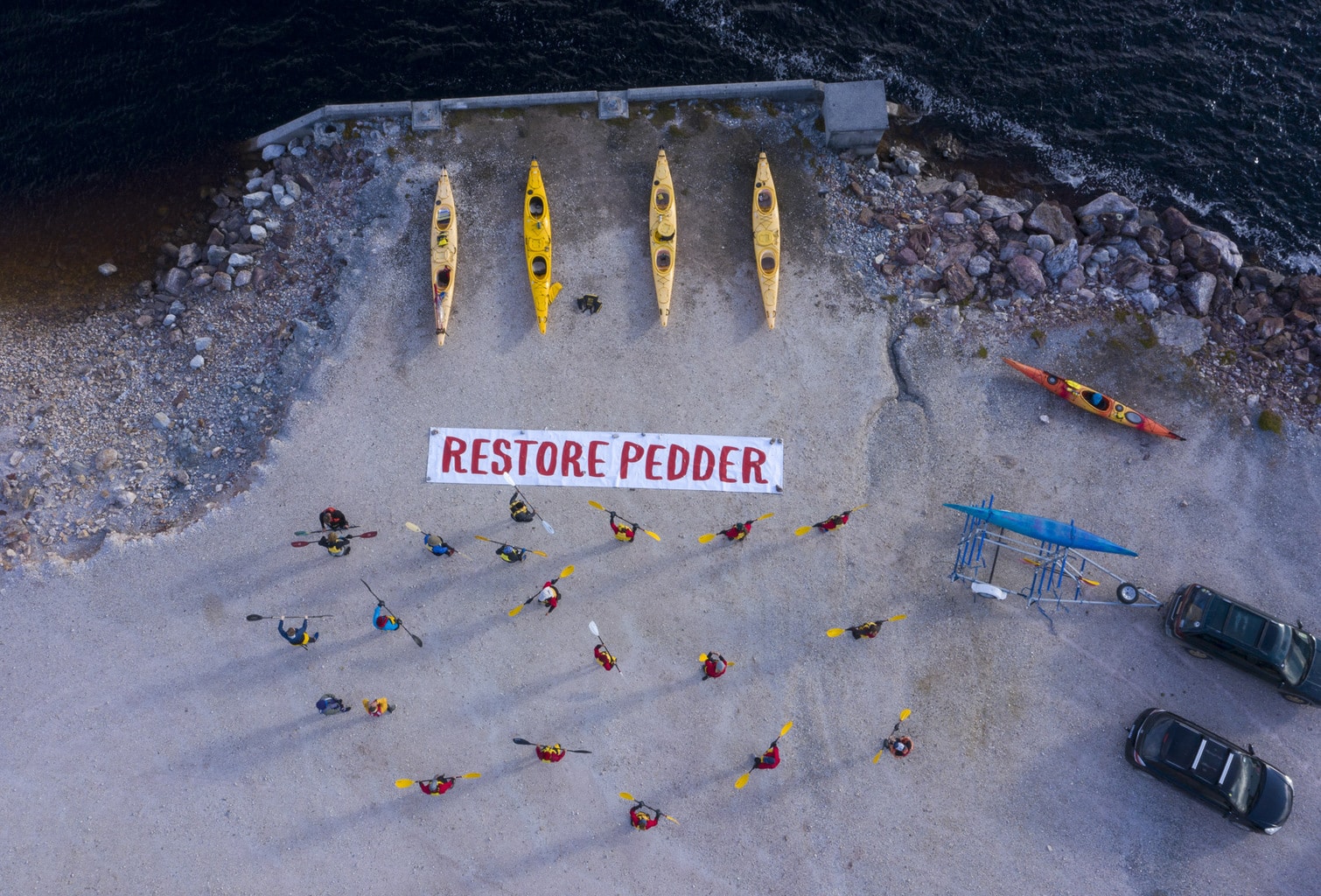 Lake Pedder was infamously flooded in 1972 with significant resistance from the community. The eventual flooding of Lake Pedder galvanised the community  in the later efforts to save the Franklin, establish the Tasmanian World Heritage Wilderness Area and see the formation of the first political party focused on the protection of nature, The United Tasmania Group. The UTG later became the Greens party.

“It was a spectacular place, it moved you inside,” shared Sue Hope about her experience of going to the original Lake Pedder.

A few facts on Lake Pedder