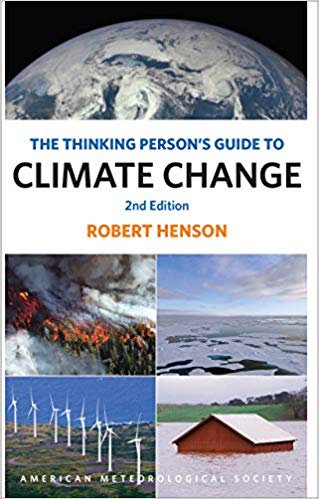 In the wake of shocking and costly tragedies, like the Australian bushfires, pressure is mounting on all governments everywhere to regulate climate change through meaningful sets of laws.

This is a necessary departure from the random, temporal policy directions and political divisions and contortions that have characterised climate debates in Australia for the past three decades.

For the past two years Climate Tasmania has been advocating that a comprehensive Climate Act be implemented in Tasmania.

We’ve gone to great lengths to communicate these plans to all forty Tasmanian political representatives in both the lower and upper Houses of our parliament, inviting a cooperative approach to reform. An essential element of our plan is for the whole legislature to be engaged in the implementation of such a revised Act, as has been the case in New Zealand and other world jurisdictions. 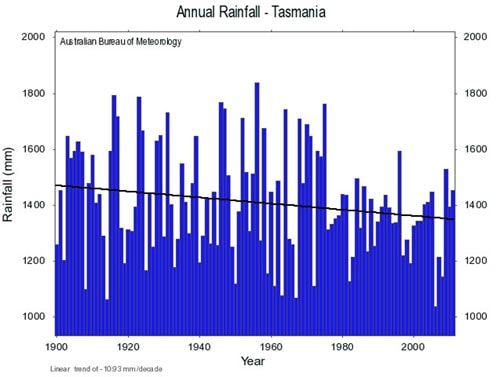 At present climate change, as an issue, is almost unregulated in Australia. That is, there are few laws in any of our federal or state jurisdictions that require the respective governments and their agencies to take appropriate actions to deal with climate change. (*)

This is in stark contrast to how governments treat every other major area of environmental, economic and social management. Issues such as biodiversity protection, chemicals, water resources, forest management, pollution control, development controls, natural and cultural heritage, national parks and reserves, mining and fisheries… are all subject to an array of laws and regulations that require certain actions to be undertaken by law.

(Tasmania’s bank of environmental laws and regulations are outlined here. Readers will note the paucity of regulation that applies to the climate change issue.)

Though there will always be live debates about the adequacy of some of these laws, at least the public can be confident that there are legislated regimes in place to take the management of each issue away from the distemper of day-to-day politics and provide some rigour to longer term management.

The absence of such essential climate regulation is now bringing all world jurisdictions around to the need to lift their game and give statutory force and continuity to climate action. Doing so is absolutely essential to meeting carbon reduction targets that have been set.
(*) States and territories states and territories have performed variously in acting on climate change via random policy plans. South Australia passed a formal climate Act in 2007, while Victoria passed its Act in 2017. 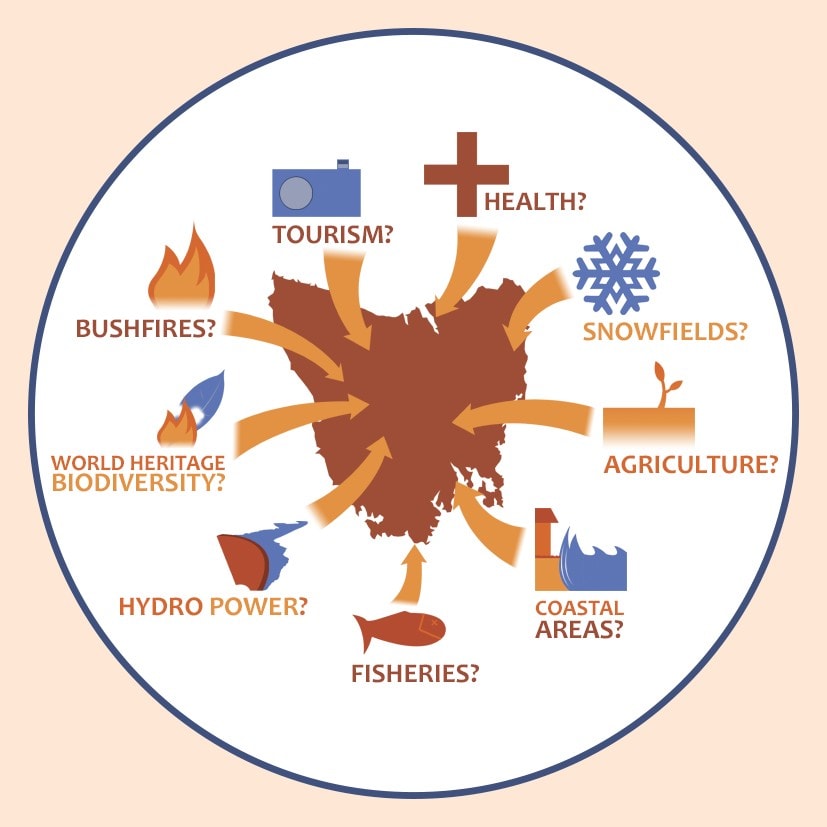 What does Tasmania have in place now?

Tasmania does have a very elementary Climate Act. However, it contains no meaningful provisions.

That is, were it to be be abolished tomorrow we would see no noticeable change. In the twelve years since its inception the Act has placed no onus on government or agencies to respond to the climate change imperative. Consecutive state administrations have relied, instead, on a sequence of ad-hoc policy papers to try to address climate change without the backing of statutes.

Policy papers have their place, but they provide no continuity beyond the existing administration and they impose no mandates on government agencies, processes or businesses to rigorously deliver carbon abatement.

The climate Act does impose one requirement on the state government – that it must review the Act every four years. A review was duly carried out by consulting agency, Jacobs Australia Pty Ltd, in 2012 – almost eight years ago now.
(* In in 2012, then again in 2016)

The state government has announced that it will finally be tabling an amendment Bill in the Tasmanian parliament in coming months.

To this end the Tasmanian Climate Change Office has conducted public workshops during the past two years. However, at this stage the content of the Government’s amending Bill has not been published. (Early drafts did indicate that amendments would be minimal, but we accept that much water has gone under the bridge since then.)

The need for a much stronger legislative framework 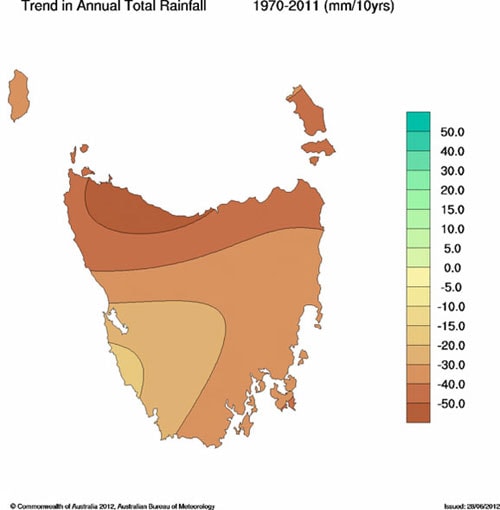 Meanwhile, climate change tumult has been marching on and the imperative to bring in much more rigorous legislation has been rapidly gathering pace.

New Zealand paved the way for all of us in 2019 through its new Climate Act, prepared through a thorough bipartisan approach, enabling all parties in the NZ national parliament to be part of the deliberation process. New Zealand’s approach became law in November of last year.

Here in Australia, at the federal level independent federal MP, Zali Steggall, has launched a bold move to regulate climate change nationally. Steggall’s Bill would draw opposing parties together and create a tamper-proof institution to determine the general direction of Australia’s climate policies into the indefinite future.
(Note that the UK parliament, as long ago as 2008, passed what was at the time quite strong legislation that was negotiated by the two major parties. Both the NZ bill and Steggall’s have been modelled around that framework.)

Decisions that our state and territory governments make are hugely significant in regulating our nation’s climate adaptation and mitigation performance.

Here in Tasmania, the science community and those businesses and communities negatively affected by calamitous weather events are seeing the need for climate change to be more thoroughly and sensibly regulated here.

As we await to see what amendments the state government may be putting forward Climate Tasmania has prepared a set of drafting instructions for what we believe to be a much more rigorous new Act and have invited all MPs to think carefully about our proposals as a template for reform.

Meanwhile, Private Members Bills have been prepared by independent MP Madeleine Ogilvie and also by the Tasmanian Greens, through their climate spokesperson, Rosalie Woodruff.

Each of these Bills, if implemented, would create new institutions and statutory processes to make sure that climate change action becomes central to governance. It is anticipated that these Bills will be tabled for debate in coming weeks.

We have seen these bills but at this point we are not at liberty to publicise their content. What they do clearly illustrate is the accelerating drive for proper climate change laws to come into being.

These draft Bills will also, no doubt, provide useful groundwork that will help the Tasmanian legislature come to terms with the inadequacy of the status quo and what to do about that situation. Our concern is that climate change needs to be lifted out of the partisan politics that dominates debates. Experience elsewhere shows that such unanimity of purpose can be achieved.

In the course of our meetings with political representatives to talk about possible legislative reforms we have been struck by the fact that many MPs openly admit to possessing inadequate knowledge of climate science, climate futures and energy matters.

This is to be understood, because an enormous amount of technical knowledge underpins a full understanding of the climate change predicament and potential remedies of it.

Our view is that the Tasmanian parliament needs to establish a standing parliamentary committee that can take evidence from experts and those impacted by extreme climate-related events. Alternatively, a new Climate Act could embody avenues to overcome this obvious shortcoming.

…we believe that by taking up a cooperative and positive approach to climate reforms Tasmania has many advantages that can enable us to take an authentic national lead in responding to climate change.

Our case is summarised in this 15 minute presentation. Our drafting instructions can be viewed here.

Climate Tasmania would be very happy to discuss our proposals with any interested parties, such as businesses and community groups.

Climate Tasmania is an expert body that replaced the Tasmanian Climate Action Council (TCAC) – an advisory body that was initiated by the Lennon state government to provide advice on climate change. The TCAC was disbanded by the incumbent state government in 2014 as part of its budget restraints.

Comments can be made on the climate change topics in the Forums.