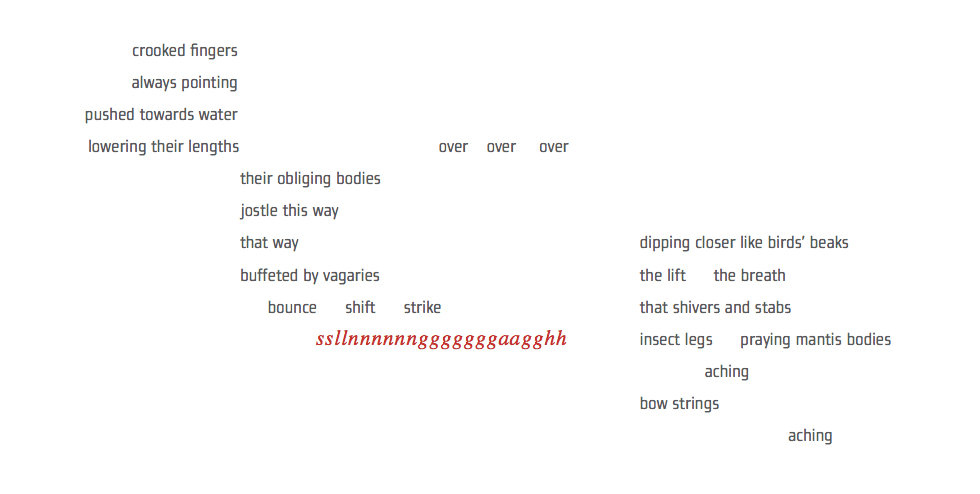 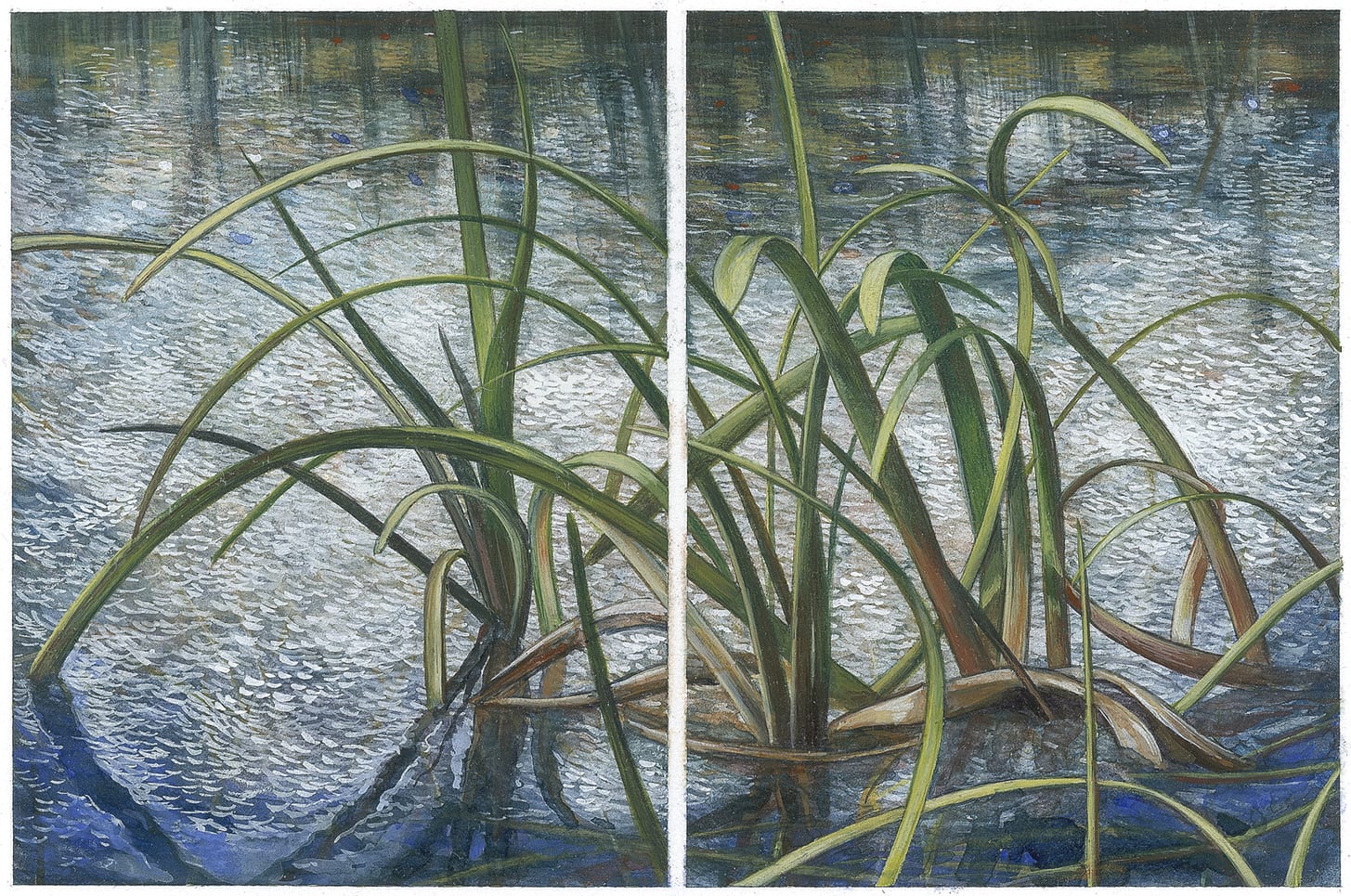 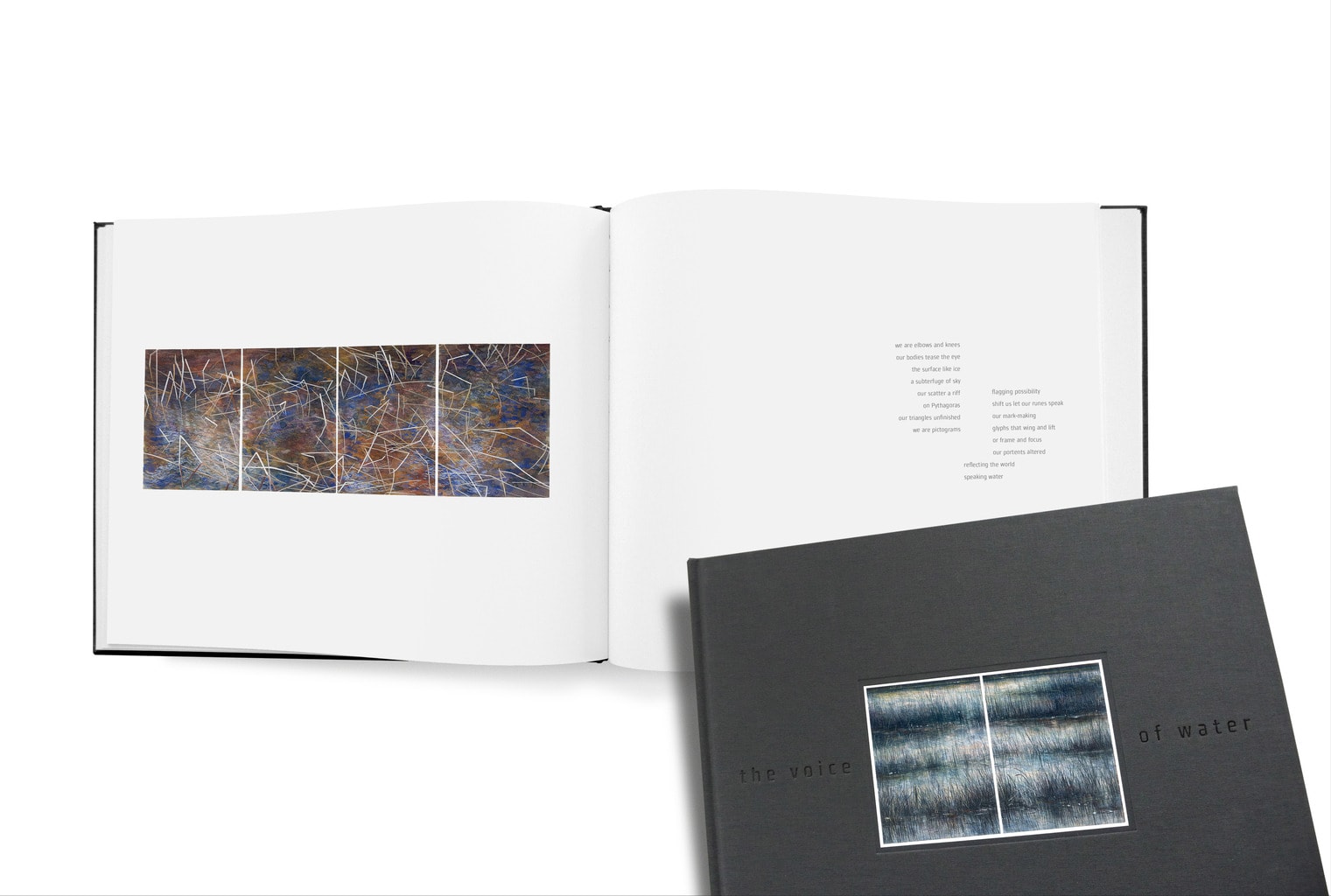 The Voice of Water is an artists’ book comprising of thirty detailed miniature paintings and poems which celebrate and pay homage to the beauty and ephemeral life of wetlands, by two Tasmanians. They are Sue Lovegrove, a visual artist, and Adrienne Eberhard, a poet.

The Voice of Water is a meditation on the preciousness and impermanence of ephemeral wetlands. One of the key ideas explored throughout the book is how we can perceive landscapes not just through sight but also through the senses and through the body. Through close observation to sounds, sensations, aesthetics and ecology, Sue and Adrienne reveal the fragility and fleeting nature of life at the heart of a lagoon – the embrace of its reaches, the constantly shifting light patterns, its melancholy darkness in the shadows, and the movement of wind imprinting on both water and the feathery expanse of grasses as well as the sound track of place from frog call to the tapping of insect legs and reeds.

In our increasingly climate-stressed environment, water is becoming more ephemeral and transient. Over the time that Sue and Adrienne worked on this project the water levels in the wetlands they visited altered considerably, changing from deep and life-sustaining, to shallow and dried out. The intimacy and intensity of the miniature form used throughout the book aims to highlight this impermanence as well as act as a lens to draw the reader into the miniscule things that are often overlooked and unseen while simultaneously evoking a grander scale. All the miniature paintings are reproduced actual size, either 8 x 12 cm or 8 x 24 cm. The Voice of Water is a timely reminder of the preciousness of these wetlands – their richness, fecundity and the life they support, is because of water.

The source of inspiration came from spending time in several wetlands on the east coast of Tasmania: the Big Punchbowl, Barney Wards Lagoon, Moulting Lagoon and Seymour Swamp. The collaboration between artist and writer was quite unique as neither one illustrated the other. Sue and Adrienne worked side-by-side, drawing and writing. Often, they would spend hours, sitting, listening and watching, working, then walking or wading through and around the swamps. It was a small miracle when they came to look at the paintings and the poems, they seemed to match perfectly. This was not a collaboration in response to each other’s work, rather it was a collaboration based on responding to the lagoons, of listening, watching, absorbing, writing, painting, and the lagoons’ spell resonating in their shared work.

The Origins of The Book

The idea for The Voice of Water originated in the Poets and Painters project of 2016, hosted by the Tasmanian Land Conservancy and Bett Gallery Hobart which brought together nine eminent Australian poets and artists to work together. The aim of this project was to bring artistic and creative expression to ecological issues through a residency at the Big Punchbowl wetland, a Tasmanian Land Conservancy reserve on the east coast of Tasmania. Following their highly successful and productive collaboration, Sue and Adrienne continued to work together and further developed their ideas on creative responses to sensory perception of the landscape. The book is the outcome of this extended project spanning a year in the making. The book has been funded by a project grant from the Australia Council.

Sue Lovegrove is an artist based in Tasmania. She has exhibited nationally since 1992 in over 28 solo exhibitions. Sue has received numerous grants and awards including an Australian Antarctic Division Arts Fellowship and her work is held in many national institutions including the National Gallery of Victoria, National Gallery of Australia, Tasmanian Museum and Art Gallery and Queen Victoria Museum and Art Gallery. The Voice of Water is the first publication showcasing her artwork.

Adrienne Eberhard is a Tasmanian writer. She has published three previous collections of poetry with Black Pepper (Melbourne): Agamemnon’s Poppies (awarded Second Place in the Anne Elder Prize for a first collection); Jane, Lady Franklin (adapted for PoeticA, Radio National), and This Woman (shortlisted for the 2013 Tasmania Book Prize). She has been the recipient of a number of Australia Council grants for new work, and her poetry has been published in journals in the US, the UK and France. Adrienne’s poems are widely anthologised, most recently in Best Australian Poems (Black Inc, 2017) and Contemporary Australian Poetry (Puncher and Wattmann, 2016).